Malignant tumors have seriously threatened human health, especially in developing countries. According to the World Health Organization, there are 14 million new cancer cases worldwide annually, and the number of cancer deaths soars in the same period. Particularly, lung cancer has become one of the most common malignant tumors worldwide (1). Therefore, early diagnosis and targeted treatment of lung cancer have attracted widespread attention.

Due to limited means of screening, most patients with lung cancer have already been in the advanced stage upon diagnosis. Therefore, finding effective biomarkers for screening and early diagnosis is of great significance. With in-depth study on the pathogenesis of lung cancer, long non-coding RNA (lncRNA) has been highlighted (2,3). Non-coding RNAs are a class of RNAs with a length of over 200 nucleotides, and lncRNA plays important roles in many life activities such as dose compensation, as well as regulation of epigenetics, cell cycle and differentiation. ANCR lncRNA, which is located on human chromosome 4q12, has been reported to participate in many cancers such as rectal cancer, liver cancer and breast cancer (4-6), but its role in lung cancer remains unclear. FOXO1, as a transcription factor, is involved in the growth inhibition and prognosis of lung cancer (7). ANCR lncRNA can specifically bind FOXO1 and regulate osteoblast differentiation (8). In this study, the expressions of ANCR lncRNA and FOXO1 in lung cancer and adjacent tissues of patients undergoing surgeries in our hospital were detected, and the effects of ANCR lncRNA on the biological behaviors of lung cancer cells, aiming to provide a new target for diagnosis and treatment.

The lung cancer and paracancerous (distance: ≥5 cm) tissues of 50 patients receiving surgeries in our hospital from January 2016 to December 2017 were collected. All cases were pathologically diagnosed as primary lung cancer, without complication with other primary tumors. The study was conducted in accordance with the Declaration of Helsinki (as revised in 2013). The study was approved by the institutional ethics committee of our hospital (approval No. ZUCM-FAH-201601003), and written informed consents were obtained from all patients.

A549 cells were cultured in DMEM containing 10% FBS, and the medium was refreshed every two days. The cells were passaged when the confluence reached about 90%. A549 cells in the logarithmic growth phase were transfected with Lipofectamine 3000 according to the manufacturer's instructions.

RNA pull-down assay was performed according to the kit’s instructions. Total protein was extracted, and a part of the protein lysate was collected as the input control. ANCR lncRNA was labeled with T7 RNA polymerase, and the unlabeled one was used as the negative control. ANCR lncRNA was mixed with streptavidin magnetic beads, left overnight at 4 °C, and placed on ice in cell lysate with labeled RNA for 1 h. RNA-protein binding mixtures were detected by Western blot.

RIP assay was conducted according to the kit’s instructions. When A549 cells were cultured to 90% confluence, cell suspension was prepared and added RIP buffer. FOXO1 antibody and cell suspension were incubated overnight at 4 °C. Protease K was added for digestion. The supernatant containing RNA was collected and extracted with Trizol. RNA precipitate was analyzed by RT-qPCR. Isotype IgG was used as the negative control, and input was employed as the total protein control.

The cells were digested with trypsin, inoculated in 96-well plates at a density of 5×103/well, cultured for 24 h, stained and rinsed according to the kit’s instructions. The cells were thereafter paragraphed under an inverted fluorescence microscope.

Detection of cell cycle and apoptosis by flow cytometry

Total protein was extracted from tissues and cells with a total protein extraction kit, and the concentration was measured by a BCA protein quantification kit. The protein samples were resolved by 10% SDS-PAGE, and the products were transferred to a PVDF membrane. Subsequently, the membrane was blocked with blocking buffer containing 5% BSA at room temperature for 2 h, incubated with primary antibodies against FOXO1 (1:500), Bax (1:800), P27 (1:1000), Bcl-2 (1:800), cyclin D1 (1:500) and GAPDH (1:1000) overnight at 4 °C, washed three times with buffer, incubated with secondary antibody at room temperature for 1 h, and finally exposed and developed with color development solution. Images were obtained by an automatic gel imaging system, and protein expression levels were measured by using GAPDH as the internal reference. 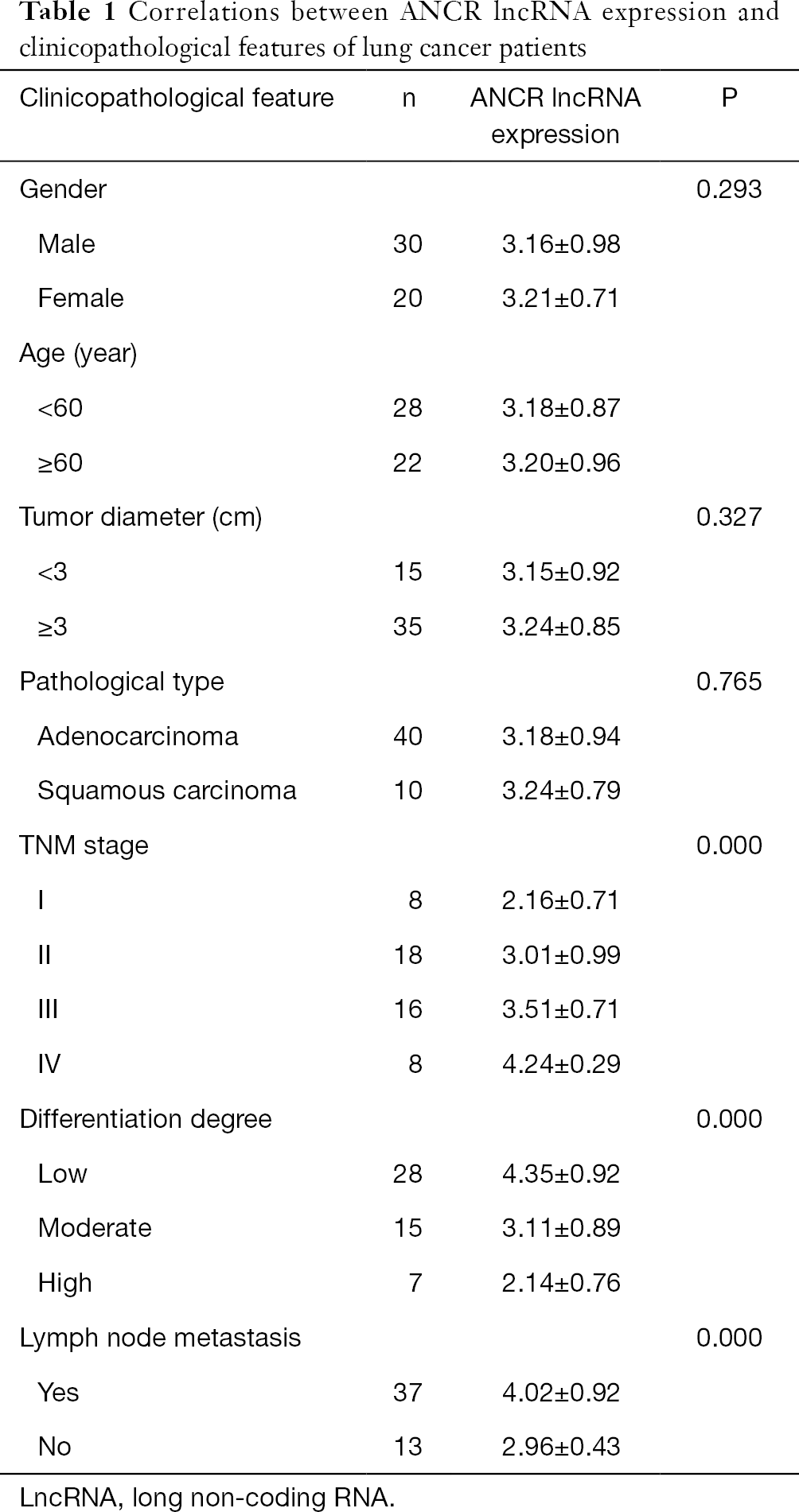 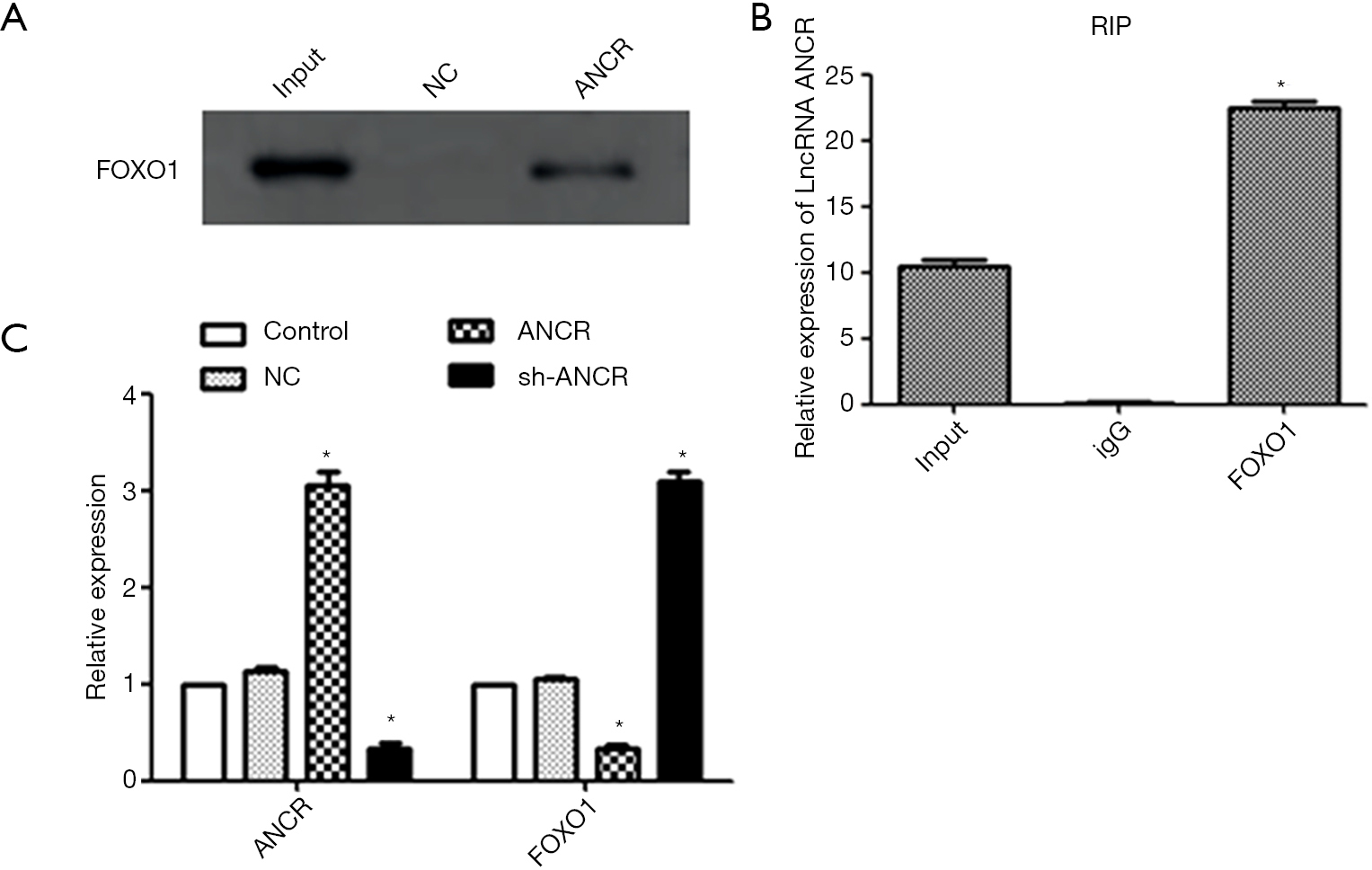 Effects of ANCR lncRNA and FOXO1 on A549 cell proliferation 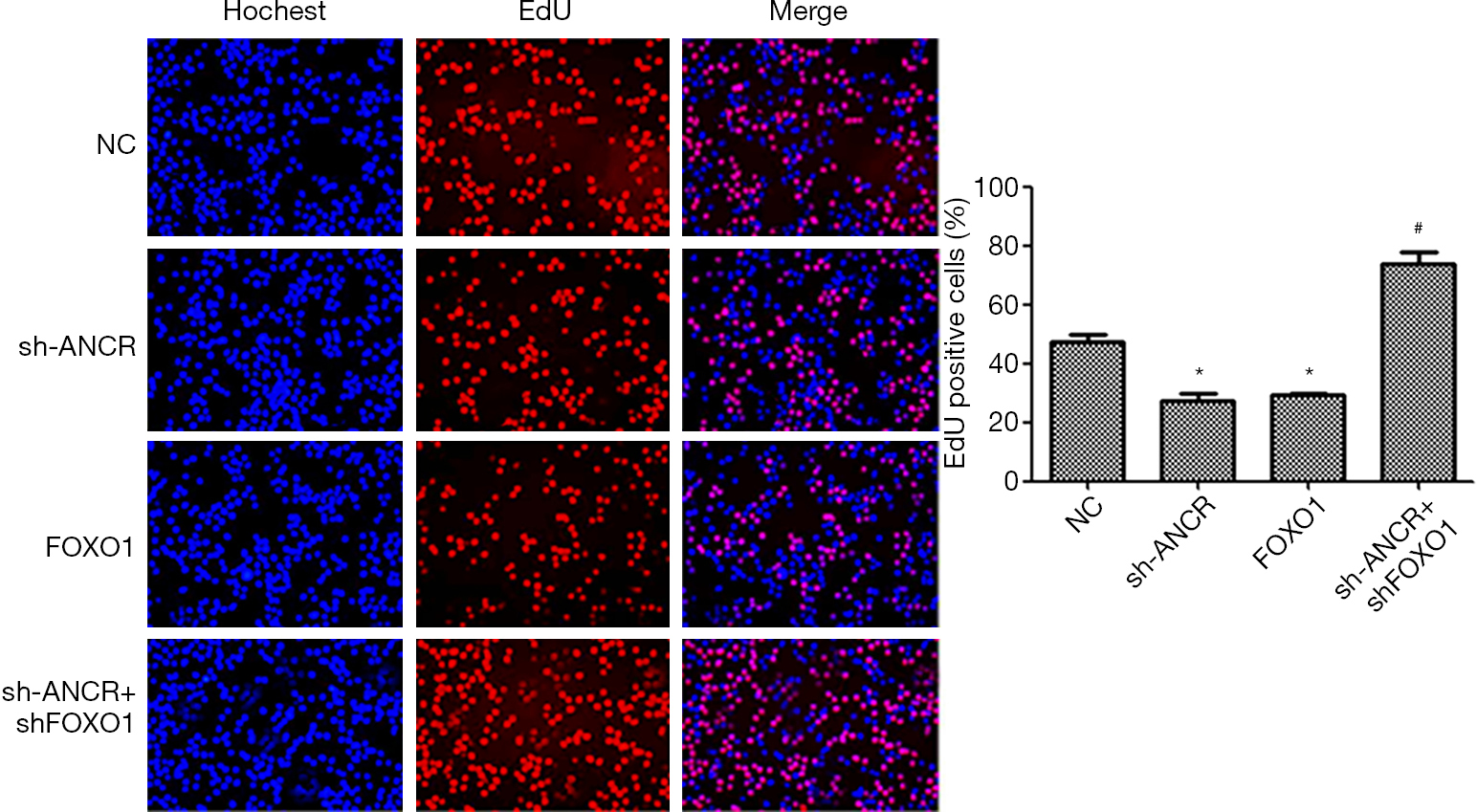 Effects of ANCR lncRNA and FOXO1 on A549 cell cycle 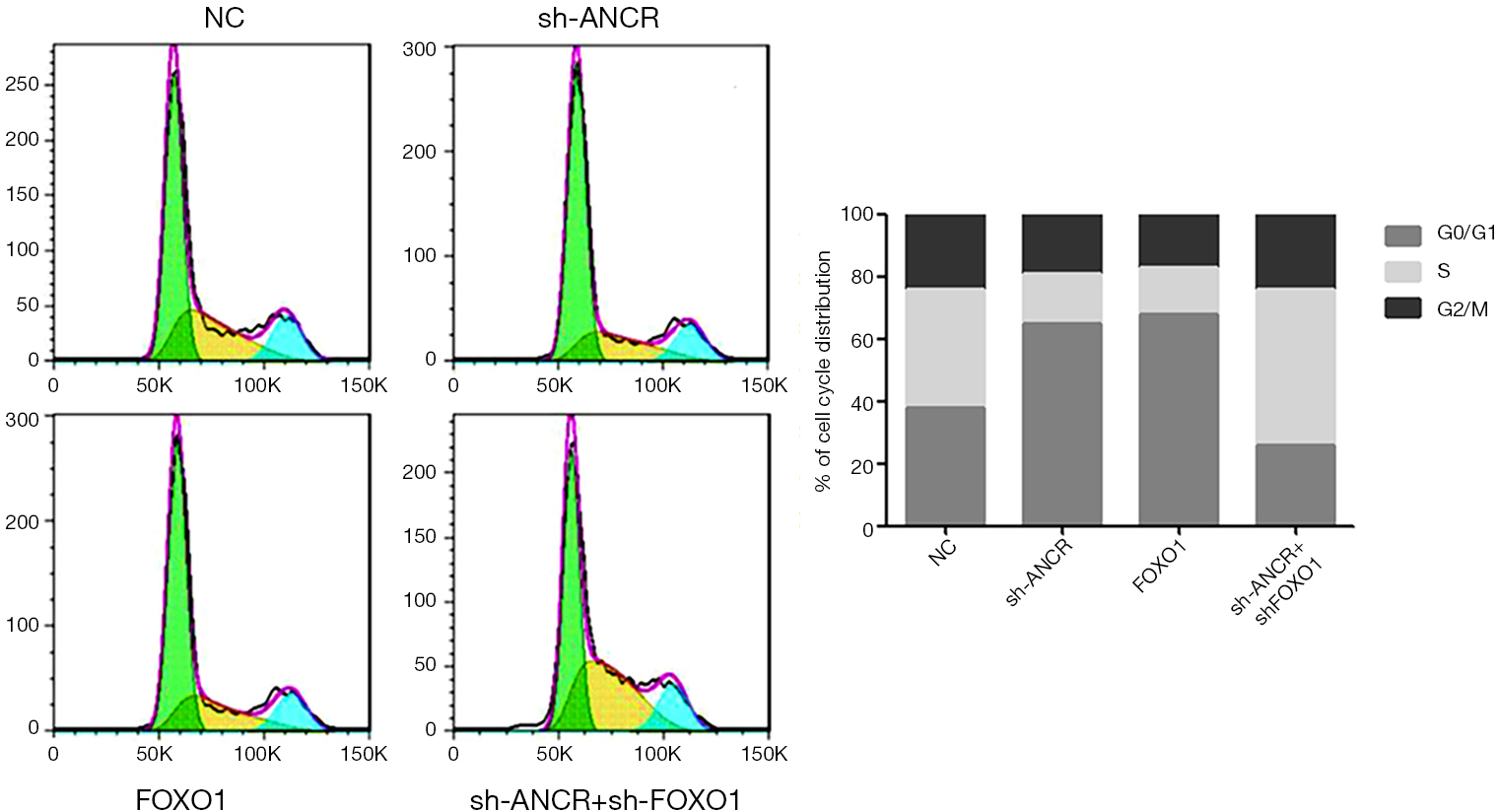 Effects of ANCR lncRNA and FOXO1 on A549 cell apoptosis 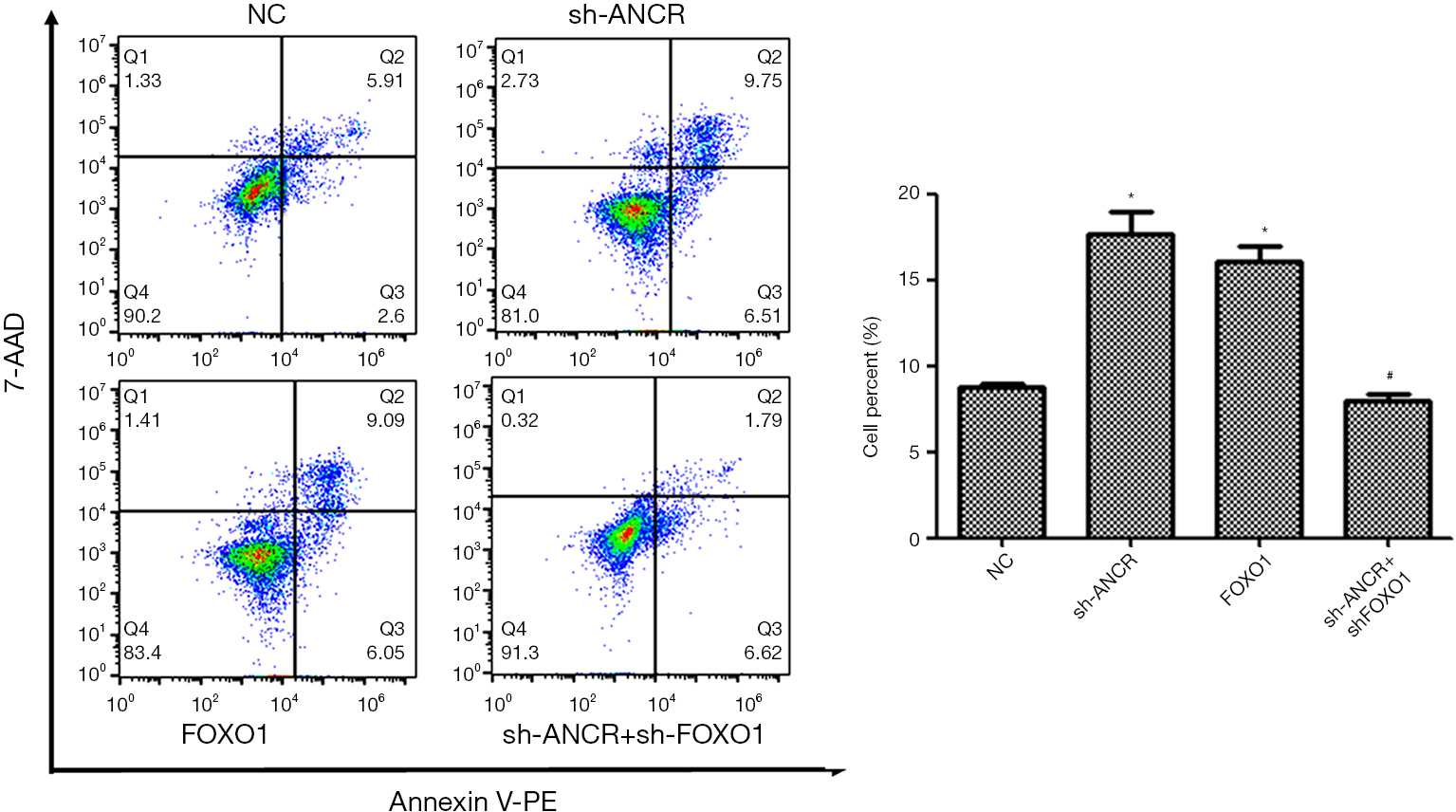 Tumorigenesis is often accompanied by changes in cell proliferation and growth mode (9). To verify the biological behavior of ANCR lncRNA, in this study, it was knocked down in lung A549 adenocarcinoma cell line, and we found that knockdown of ANCR lncRNA can reduce the proliferation of A549 cells. Furthermore, the number of cells in G0/G1 phase was increased and the number of apoptotic cells was increased. Thus, the inhibition of the ANCR lncRNA expression can inhibit the proliferation of cancer cells, arrest the cancer cell cycle in the G0/G1 phase, and promote the apoptosis of cancer cells.

FOXO1 is an important tumor-negative regulatory transcription factor, which is widely expressed in various human tissues such as lung, heart, and liver (10). It can participate in cell cycle arrest, apoptosis, DNA damage repair by regulating the expression of target genes, inhibit the growth of tumor cells and play an important role in the occurrence, development and prognosis of tumors. Low-level FOXO1 can promote the proliferation of non-small cell lung cancer cells, and FOXO1 has an important blocking effect on the cycle process of lung cancer cells, and induces apoptosis (11,12). Tang et al. found that ANCR lncRNA interacted with FOXO1 and regulated the expression of FOXO1 to inhibit osteoblast differentiation (8).

Conflicts of Interest: All authors have completed the ICMJE uniform disclosure form (available at http://dx.doi.org/10.21037/tcr-20-483). The authors have no conflicts of interest to declare.

Ethical Statement: The authors are accountable for all aspects of the work in ensuring that questions related to the accuracy or integrity of any part of the work are appropriately investigated and resolved. The study was conducted in accordance with the Declaration of Helsinki (as revised in 2013). The study was approved by the institutional ethics committee of our hospital (approval No. ZUCM-FAH-201601003), and written informed consents were obtained from all patients.