The antitumor effect of miR-448 in epithelial ovarian cancer

Tradition treatment of OC has included surgery, during which doctors remove all visible tumors, chemotherapy, and radiotherapy (4). Advances in traditional cytotoxic chemotherapies, such as intraperitoneal administration and dose-dense therapeutic regimens, are improving response rates, as are novel target agents such as bevacizumab or poly (ADP-ribose) polymerase (PARP) inhibitors (5-7).

However, these target agents have shown efficacy only in the early stages of some cases, and so more effective molecular targeting agents should be developed. Recently, microRNAs (miRNAs), which consist of short-sequence RNAs that do not encode a protein, have emerged as new biomarkers in the clinical diagnosis and treatment of OC (8).

MiRNA-448 exerts a tumor-suppressor role in numerous cancer types including breast (9-11), oral squamous cell (12), gastric (13), colorectal (14), and pancreatic ductal adenocarcinoma (15,16). However, the function of miR-448 in OC still remains unknown, and it is possible that the miRNA-448 also plays a tumor-suppressor role in OC. Epithelial ovarian cancer (EOC) is the most common type of OC. In this study, we collected 27 EOC samples and analyzed the function and expression of miR-448. We hope our findings may provide insight into the function of miR-448 in OC. We present the following article in accordance with the MDAR reporting checklist (available at http://dx.doi.org/10.21037/tcr-20-2464).

In total, the EOC samples and paired adjacent normal tissues from 27 female patients (age: 67±6.6 years) were collected from the Department of Gynecology and Obstetrics, Development and Related Diseases of Women and Children Key Laboratory of Sichuan Province, West China Women’s and Children’s Hospital.

The ethical approval of this study was confirmed by the medical ethics committee of Sichuan University (Approval ID: 20172356). The study was conducted in accordance with the Declaration of Helsinki (as revised in 2013). The 27 EOC patients from whom samples were obtained provided legal consent according to the relevant regulations.

The levels of miR-448 in the 27 EOC samples and SKOV3 and IOSE29 cell lines were detected by qRT-PCR analysis. For tissues, a mixture of 200 mg of tissue and 2 mL of TRIzol reagent was homogenized by a homogenizer in ice (cat.no.12183026, Thermo Fisher). Cells were rinsed with ice cold phosphate-buffered saline (PBS). Total RNA was extracted using TRIzolTM LS Reagent (cat.no.10296028, InvitrogenTM). The cDNA was synthesized by cDNA synthesis kit (cat.no.18091200, InvitrogenTM). The primer sequence for miR-448 and U6 were listed as followed: miR-448 F: 5'-TTATTGCGATGTGTTCCTTATG-3', R: 5'-ATGCATGCCACGGGCATATACACT-3'; U6 F: 5'-GCTTCGGCAGCACATATACTAAAAT-3', R: 5'-CGCTTCACGAATTTGCGTGTCAT-3'. The differences in target gene expression between the control group and the experimental group were determined using the 2−ΔΔCt method.

The cell proliferation was tested at the indicated time point by MTT assay. SKOV3 cells were seeded according to the manufacturer’s instructions (cat.no. ab211091, abcam, Cambridge, United Kingdom). After miR-448 mimics or miR-448 ASO transfection, the medium were aspirated carefully. Then, 50 µL of serum-free medium and 50 µL of MTT solution were added into each well. The whole plate was incubated at 37 °C for 3 h. After incubation, 150 µL of MTT was added to the solvent in each well. The plates were wrapped in foil and shaken on an orbital shaker for 15 min. Occasionally, pipetting of the liquid was required to fully dissolve the MTT formazan. The measured absorbance at OD 590 nm is proportional to the number of viable cells., and the plate was read within 1 h.

The apoptosis rate was assayed by annexin V-FITC and propidium iodide (PI) double staining. Specifically, cells (5×105) were collected by centrifugation and resuspended in 500 µL of 1× binding buffer. Then, 5 µL of annexin was added to V-FITC, which was followed by incubation for 30 min at room temperature, and the further addition of 1 µL of PI before analysis on a fluorescence-activated cell sorting (FACS) analyzer (FACSVerse, BD, Franklin Lakes, NJ, USA).

Prediction of the putative targets of miR-448

For bioinformatics prediction, Targetscan online software was used. TargetScan is a web server that predicts biological targets of miRNAs by searching for the presence of sites that match the seed region of each miRNA (17-19).

Initially, the 3'UTR of zinc finger E-box-binding homeobox 2 (ZEB2) and mutated controls were prepared and inserted into the pGL3 vector (Promega, USA) with the restriction enzymes (BanII). Then, miR-448 mimics (50 nM) and wild type or pGL3 vector were transfected into the SKOV3 cells successively by Lipofectamine 2000. The assays for firefly luciferase activity and Renilla luciferase were performed sequentially using one reaction tube according to the manufacturer’s instructions (Invitrogen, USA).

Cells were washed by phosphate-buffered saline (PBS) on ice, then scraped using a cold plastic cell scraper, and the cell suspension was gently transferred into a pre-cooled microcentrifuge tube with lysis buffer. Next, the cells were centrifuged at 12,000 rpm at 4 °C for 20 min. The protein concentration was determined by bicinchonic acid (BCA) disodium salt (ab146331, Abcam). Next, 20 µg of total protein was loaded into the SDS-PAGE gel wells (10%), and the electrophoresis were performed at 90 V for 2 h. Then, protein was transferred from the gel to the membrane. For ZEB2 analysis, the membrane was blocked at 4 °C overnight in blocking buffer, and washed by tris-buffered saline with Tween20 (TBST). After this, the membrane was incubated with ZEB2 antibody (cat.no, ab138222, Abcam, Cambridge, UK) at a dilution of 1:1,000 at room temperature for 2 h. Then, the whole membrane was incubated by the secondary antibody immunoglobulin G (IgG) (ab7090, 1:2,000 dilution, Abcam) at 4 °C overnight. After being washed by TBST three times, the membrane was mixed with ECL Western Blotting Substrate kit (cat.no, ab65623, Abcam) at a 1:1 ratio, incubated for 3 min, and get the blot in a X-ray film. 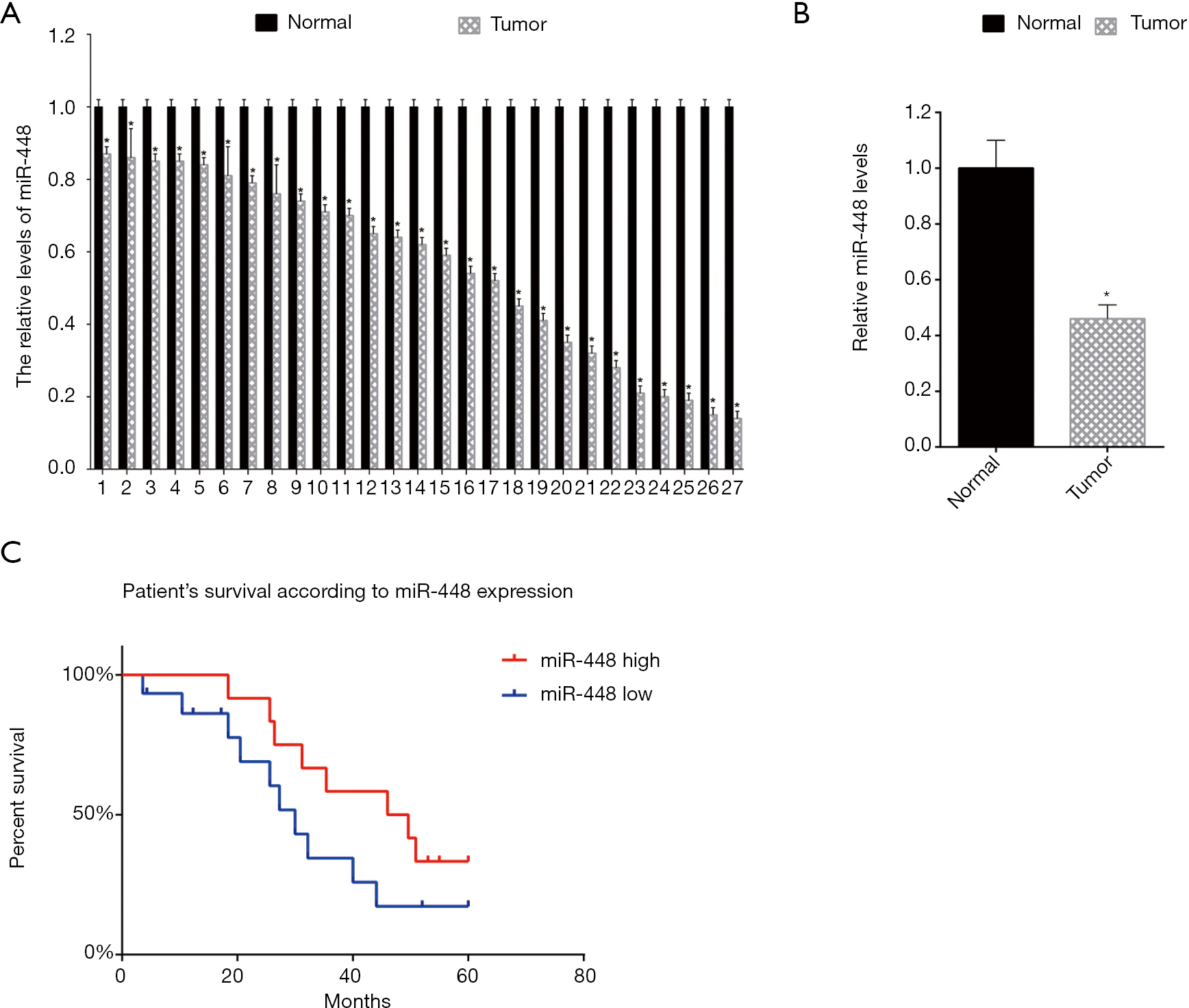 Figure 1 The low expression of miR-448 in OC tissue samples and patient survival analysis. The total RNA of 27 OC tissues was isolated for reverse transcription. Then, miR-448 levels were tested by qRT-PCR. The normal ovary tissues were used as control (A); the mean value of miR-448 of the OC tissues and their control were calculated and recorded (B). Kaplan-Meier plot of the overall survival in OC patients post-operation according to the expression of miR-448 (C). These experiments were performed in triplicate. *, P<0.05. OC, ovarian cancer; qRT-PCR, quantitative real-time polymerase chain. 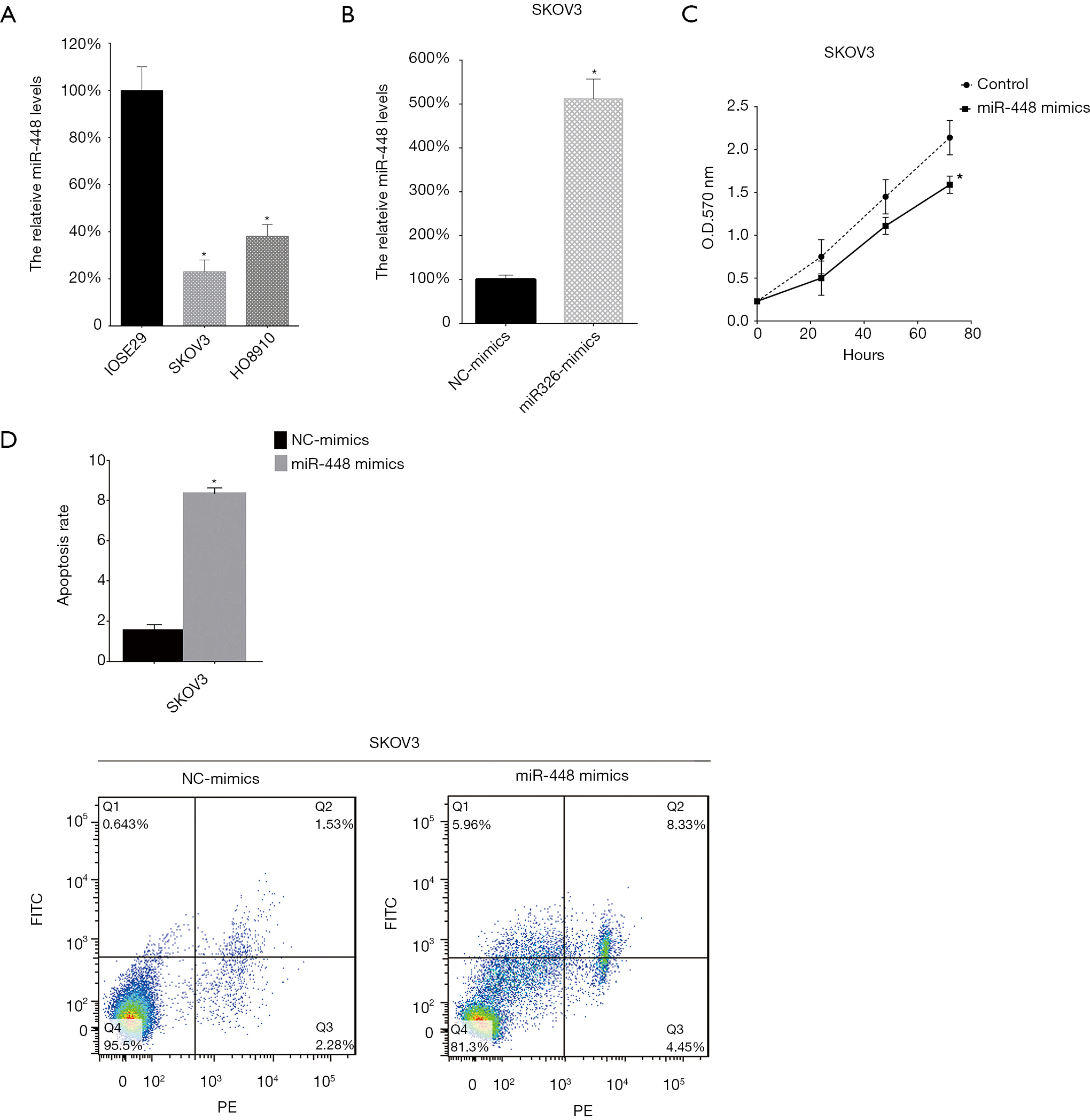 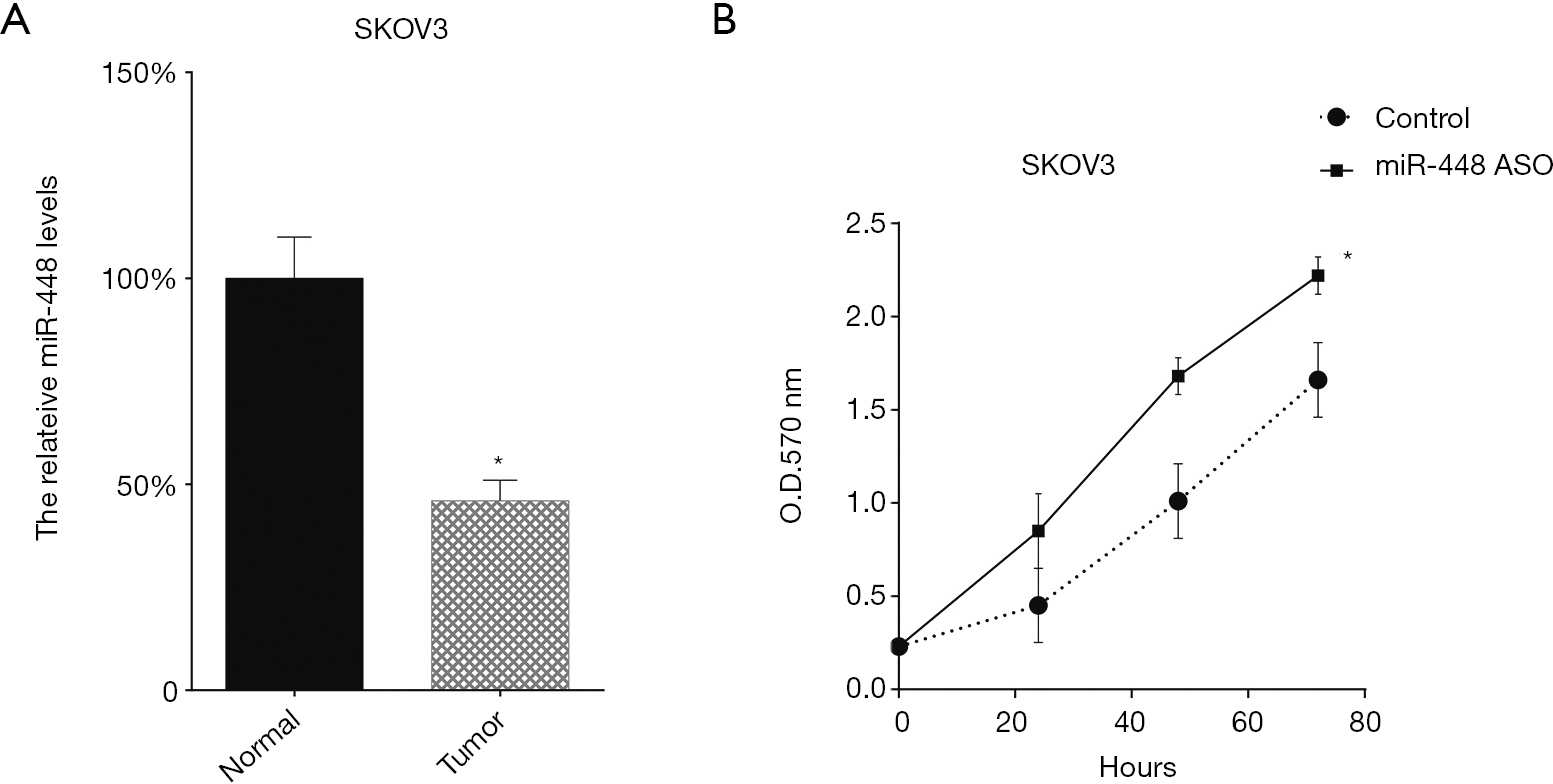 Figure 3 Downregulation of miR-448 promoted SKOV3 proliferation. SKOV3 was transfected with miR-448 ASO, with miR-NC ASO being used as a negative control, and 24 h later, the miR-448 levels of transfected cells were assayed by qRT-PCR. The miR-448 level in miR-NC ASO-transfected cells was arbitrarily defined as 100% (A). Following miR-448 ASO transfection, the cell growth of SKOV3 was tested by MTT assay (B). All experiments were performed at least three times. *, P<0.05. ASO, antisense oligonucleotides; qRT-PCR, quantitative real-time polymerase chain.

miRNA performs its role by binding the 3'UTR of mRNA. A previous study showed that miR-448 inhibited breast cancer by targeting zinc finger E-box binding protein homeobox 2 (ZEB2) (11). Thus, it is highly possible that miR-448 may inhibit cellular growth by targeting ZEB2. We listed the binding sites between miR-448 and ZEB2 and mutated the binding site in 3'UTR of mRNA (Figure 4A). Then, this mutated site was cloned into the reported plasmid. For detecting the interaction between miR-448 and the ZEB2, miR-448 mimics and reporter plasmid were transfected into SKOV3 cells sequentially. The activity data were tested 16 h following transfection. The data showed that the upregulation of miR-448 suppressed luciferase activity, whereas the mutated binding site restored it, indicating that miR-448 targets ZEB2 in SKOV3 cells (Figure 4B). As the luciferase assay showed that miR-448 could target the 3'UTR of ZEB2, we wondered whether miR-448 inhibits ZEB2 protein levels, and thus transfected miR-448 to SKOV3 cells and assayed the ZEB2 protein via Western blot. Indeed, this showed that miR-488 suppresses ZEB2 expression (Figure 4C). 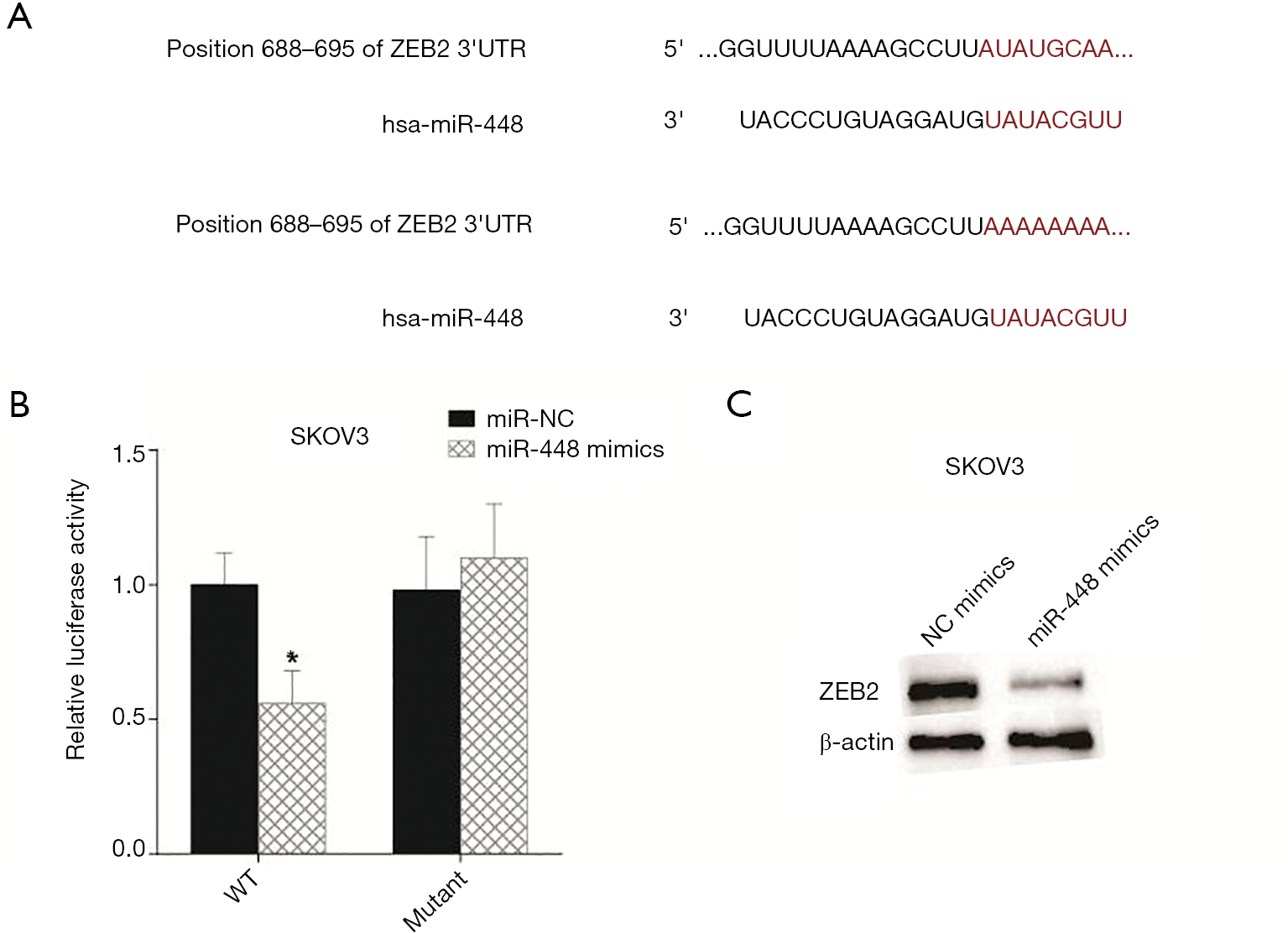 Figure 4 ZEB2 was targeted by miR-448. The binding sites between the 3'UTR of ZEB2 and miR-448 were listed, including the mutated position (A). miR-448 and the reporter plasmid with the 3'UTR sequence of ZEB2 (mutated or wild type) were transfected into SKOV3 cells, and the luciferase value was then tested (B). The ZEB2 protein was tested by Western blotting following the presence or absence of miR-448 transfection (C). All tests were performed at least three times. *, P<0.05. ZEB2, zinc finger E-box-binding homeobox 2.

In this study, we tested the role of miR-448 in EOC. This study found that miR-448 plays a suppressive role in EOC. Enforced miR-448 expression inhibited cell growth and the promoted cell apoptosis rate. Our data indicate that the ZEB2 may be a target gene of miR-448.

Our data also point to miR-448 as an indicator of EOC patient prognosis. The patient group with high miR-448 levels showed a higher survival rate. Our data also proved that ZEB2 is at least one of the target genes of miR-448. Consistent with this, previous studies showed that an elevated level of ZEB2 correlated with poor prognosis in ovarian cancer (20,21). Importantly, ZEB2 is a key factor in epithelial-mesenchymal transition (EMT) (22-24). Importantly, growing evidence shows that EMT induces chemotherapy resistance and stemness, and the underlying molecular mechanism of EMT inducing chemotherapy resistance involved with EMT results lower drug uptake, EMT enhanced repair of carboplatin-induced DNA damage, and decreased apoptosis (25).

It is highly possible that miR-448 plays an important role in the EMT of EOC. Our findings further show that the miR-448 level in EOC tissues could be used as an indicator of prognosis, but it is not appropriate for the diagnosis of EOC. To confirm our speculations, further research will involve collecting fresh serum from EOC patients to test whether miR-448 in serum is related to EOC patient prognosis.

Previous studies have indicated that a miRNA-gene network exists in OC (29). We surmise that miR-448 is a key miRNA and plays an important role with miR-139-5p by targeting ZEB2 and/or ROCK2. Overall, this study indicates that miR-448 has an anti-tumor role in EOC.

Reporting Checklist: The authors have completed the MDAR reporting checklist. Available at http://dx.doi.org/10.21037/tcr-20-2464

Conflicts of Interest: All authors have completed the ICMJE uniform disclosure form (available at http://dx.doi.org/10.21037/tcr-20-2464). The authors have no conflicts of interest to declare.

Ethical Statement: The authors are accountable for all aspects of the work in ensuring that questions related to the accuracy or integrity of any part of the work are appropriately investigated and resolved. The ethical approval of this study was confirmed by the medical ethics committee of Sichuan University (No. 20182356). The study was conducted in accordance with the Declaration of Helsinki (as revised in 2013). The 27 EOC patients from whom samples were obtained provided legal consent according to the regulations of Sichuan University.