Carcinoembryonic antigen-associated cell adhesion molecule 1 (CEACAM1) is a member of the immunoglobulin superfamily and carcinoembryonic antigen (CEA) family. In human beings, the CEACAM1 gene is about 1.48 kb and encodes 12 different splice variants. CEACAM1 is expressed by certain epithelial, endothelial, lymphoid, and myeloid cells. Previous literatures have been implicated in the functions of CEACAM1 in cell adhesion, immune response, insulin action and angiogenesis. In recent years, there is an increasing number of studies showing that CEACAM1 plays an important role in tumorigenesis by regulating tumor progression, invasion, metastasis, and tumor angiogenesis (3). However, the correlation between esophageal cancer angiogenesis and CEACAM1 is remains unknown.

In this study, we evaluated the protein expression of CEACAM1 and MVD, and then explored the correlation of angiogenesis and CEACAM1 in ESCC.

We present the following article in accordance with the REMARK Reporting Checklist (available at http://dx.doi.org/10.21037/tcr-19-2039).

This study was approved by the Ethics Committee of Zhangjiagang Hospital of Traditional Chinese Medicine affiliated to Nanjing University of Chinese Medicine, Suzhou, China (No. 2018-S1072) and conducted in accordance with the Declaration of Helsinki (as revised in 2013). We also received the informed consent of patients. Between January 2010 and January 2016, 80 previously untreated patients of histologically proved ESCC with no distant metastasis were eligible for our study. Cancer stage was recorded based on the International Union Against Cancer (UICC) TNM classification. The median age of the patients at the time of surgery was 63 years, ranging from 50 to 75 years. Fresh primary ESCC tissue samples were derived from patients undergoing surgical procedures. All patients underwent radical esophageal cancer surgery. The clinical features of the patients are listed in Table 1. After completion of primary treatment, patients were followed up every 3 months in the first 2 years, every 6 months in 2–5 years and every year after 5 years. Follow-up evaluation included physical examination, chest radiography, gastroscopy, blood examination and computed tomography scan of chest and abdomen. Within the 40-month median follow-up, the local recurrence, distant metastasis of ESCC and the survival status of patients were verified by clinical records and direct telecommunication with patient or their family. 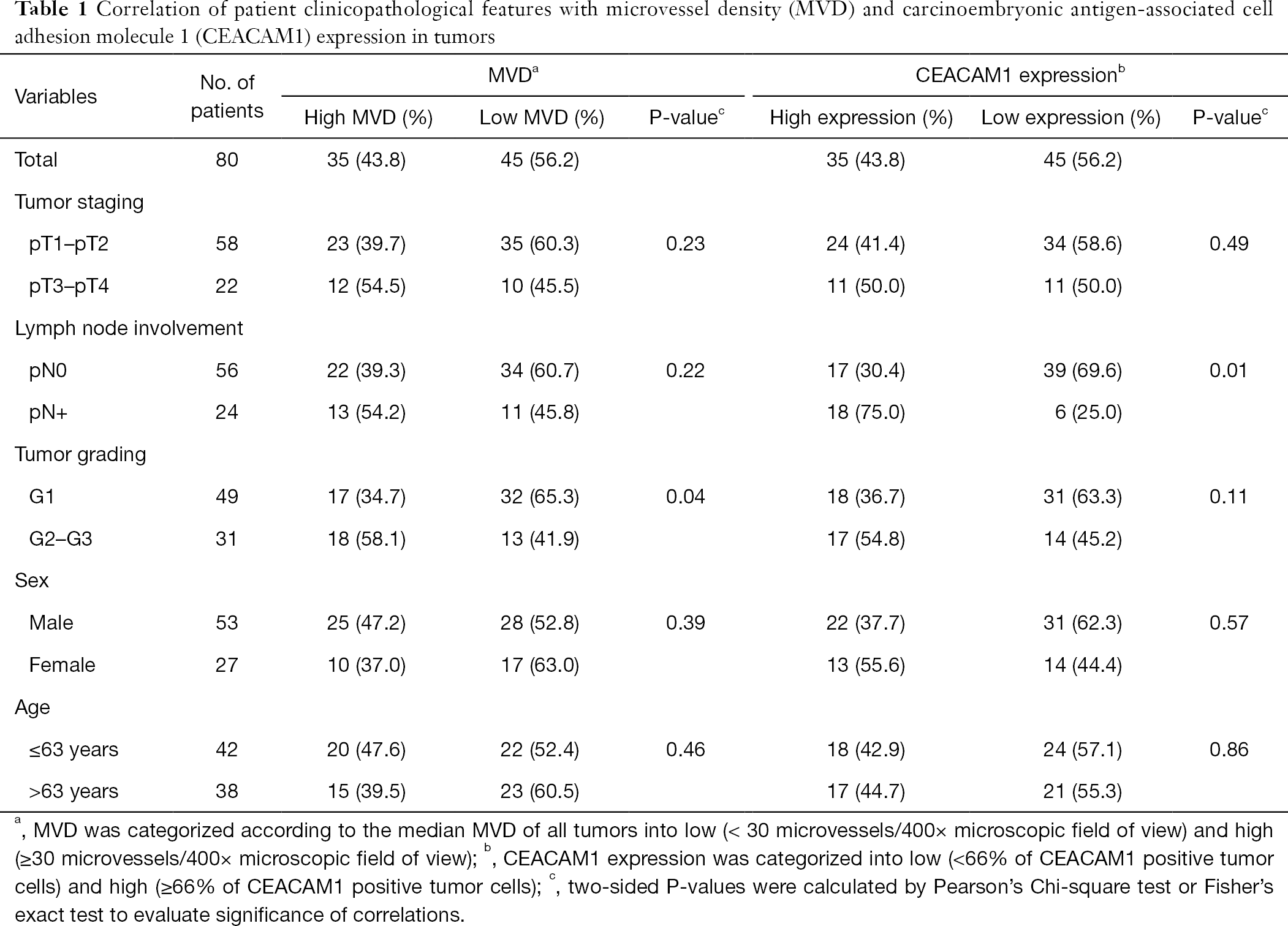 To investigate the clinical significance of CEACAM1 expression in patients with ESCC, we first examined CEACAM1 in human ESCC tissues by IHC. In normal esophageal tissues and stromal cells in ESCC tissues, CEACAM1 was undetectable. Using the criteria described above, high and low expression of CEACAM1 in ESCC was in 35 of 80 (43.8%) (Figure 1A) and 45 of 80 (56.2%) (Figure 1B, Table 1), respectively. 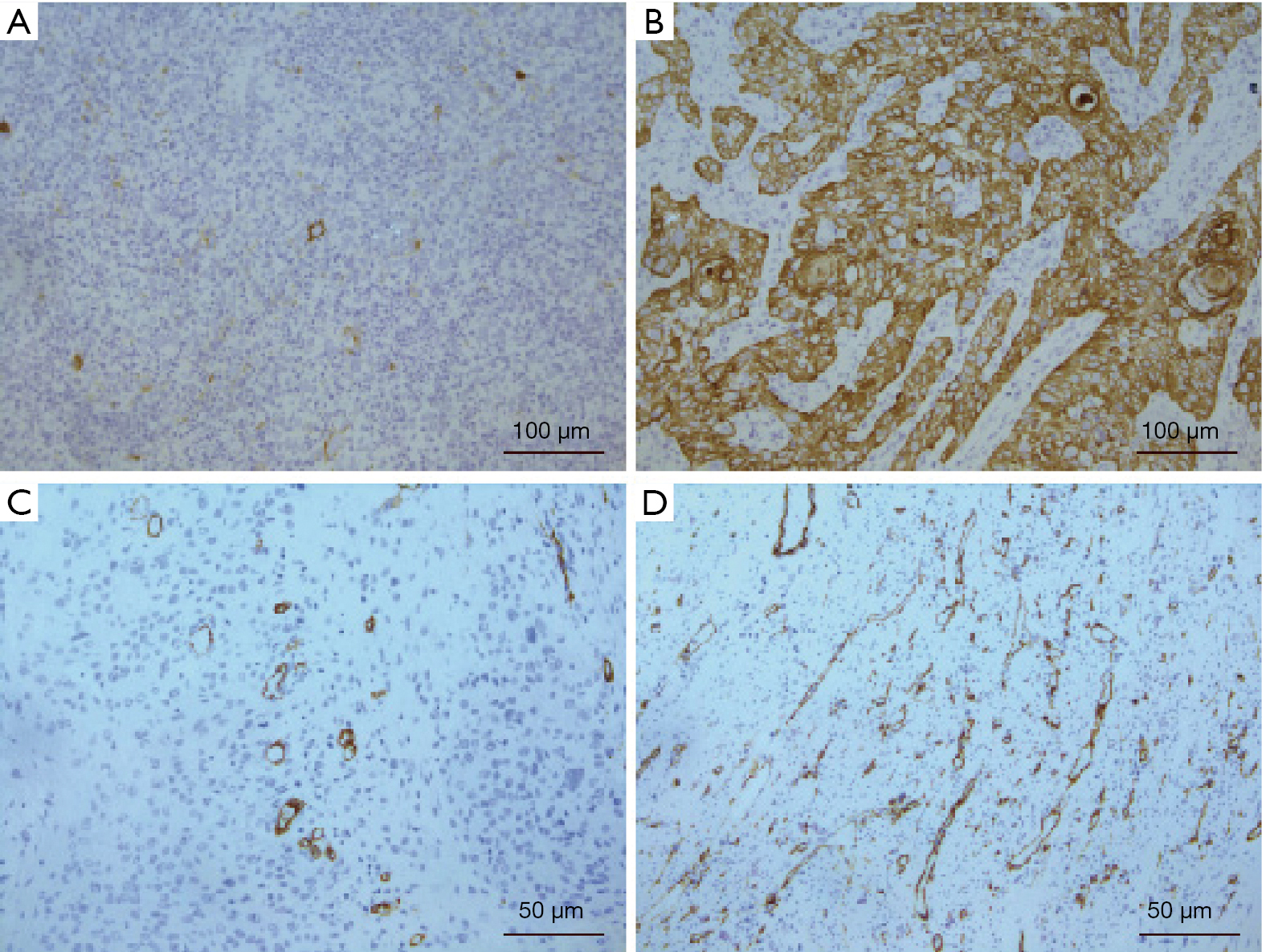 CD105 was used as a vascular endothelial marker to evaluate MVD in ESCC tissues. The median of microvessels density in ESCC tissues was 30 (ranging from 15 to 55), at ×400 magnification microscope field. Therefore, those ESCC tissue samples were classified as high MVD and low MVD respectively according to the median. High and low MVD was in 35 (43.8%, ≥31 microvessels) and 45 (56.2%, <30 microvessels), respectively, of the ESCCs in the whole cohort at ×400 magnification microscope field (Figure 1C,D, Table 1).

The data analysis showed that MVD and the expression level of CEACAM1 were correlated with lymph node metastasis, depth of tumor invasion, and tumor grade. However, neither MVD nor CEACAM1 was found to be in significant correlation with gender or age (Table 1).

CEACAM1 expression, MVD and their correlations with recurrence, metastasis, and survival

The results of data analysis showed that the expression level of CEACAM1 was positively correlated with the level of MVD (Table 2).

The median post-intervention follow-up time was 40 months, ranging from 6 to 90 months. Recurrences occurred in 77.5% of patients during the observation period and all these patients suffered cancer-related deaths at the last clinical follow-up. Local recurrence occurred in 20 patients (25%), metastasis in 12 (15%), and synchronous local recurrence and metastasis in 30 (37.5%). 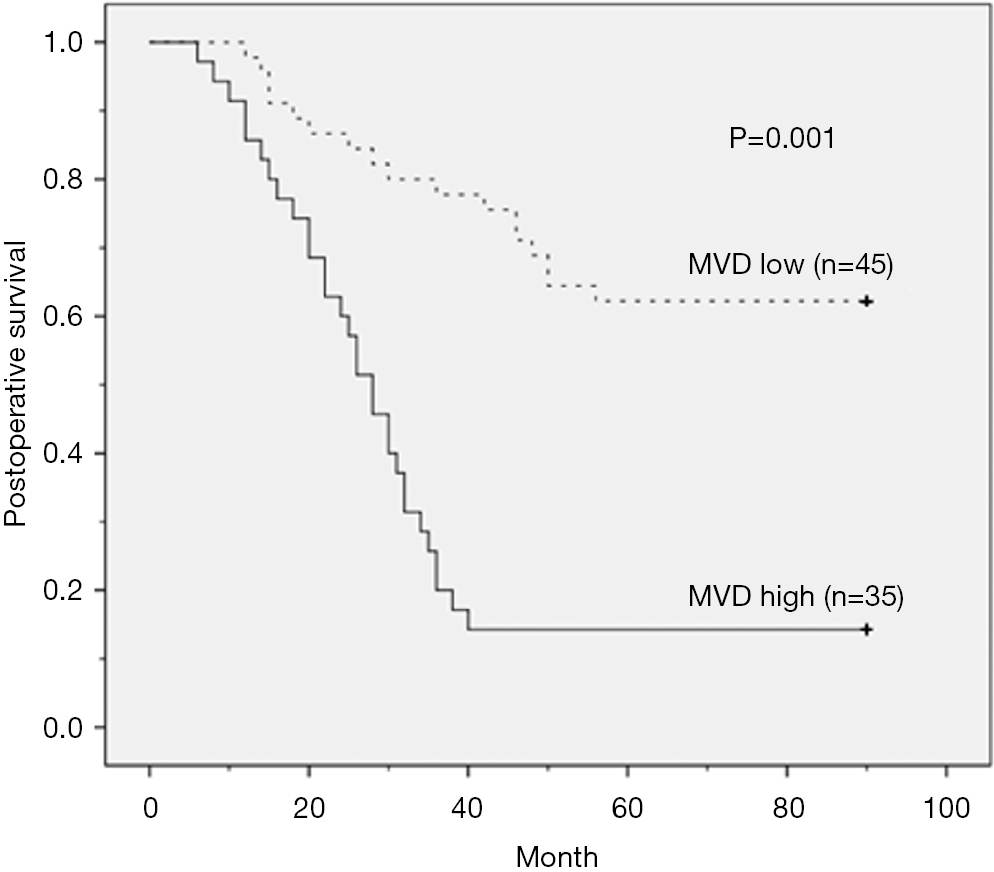 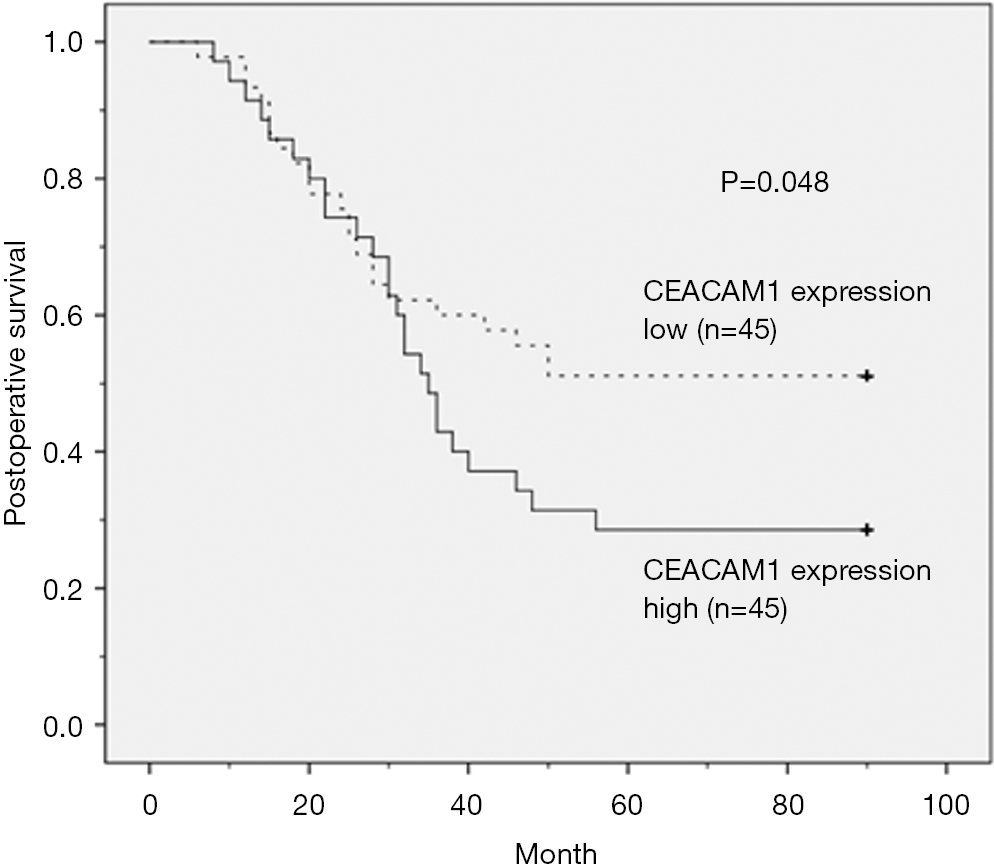 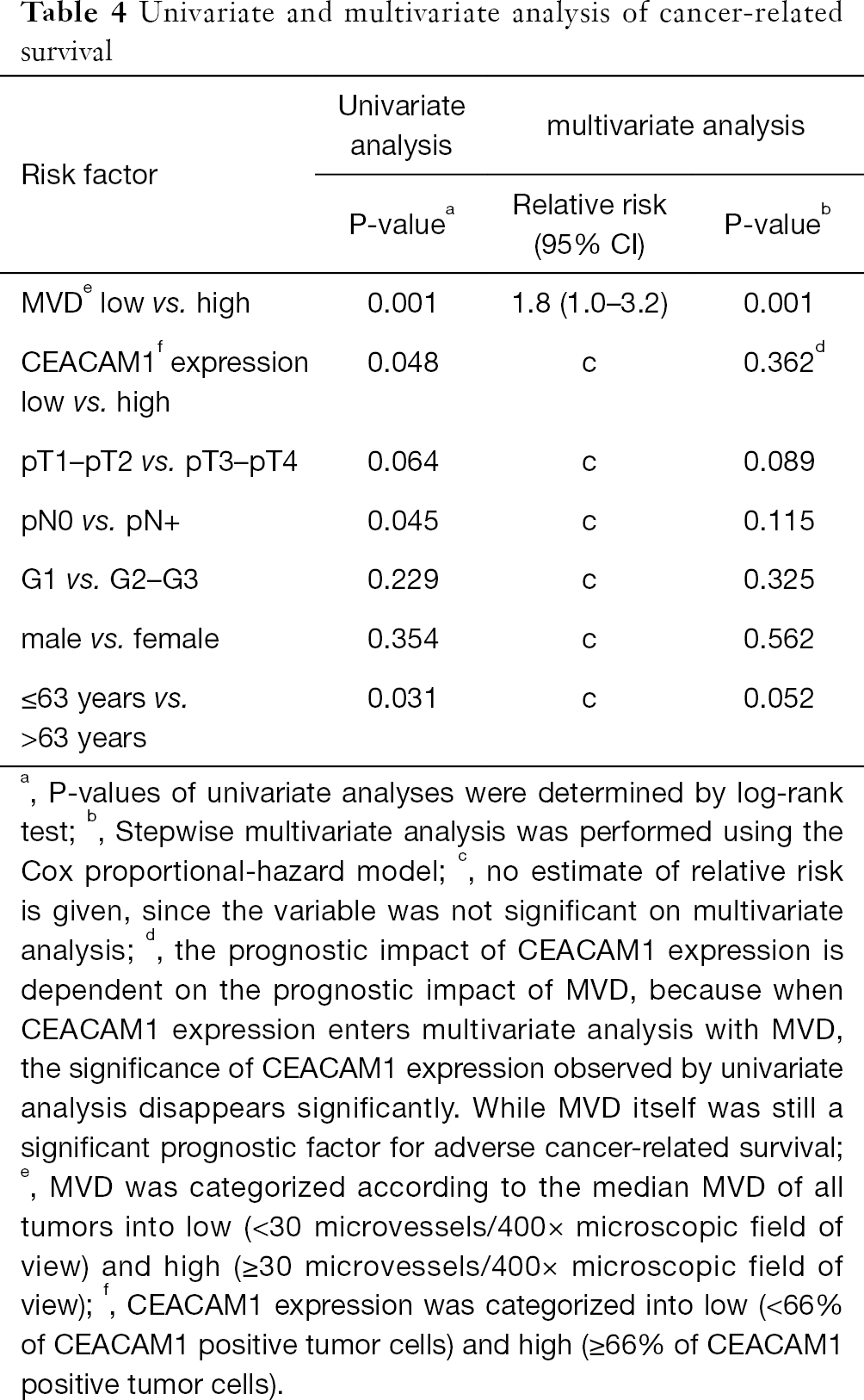 The 1.48 kb in length CEACAM1 gene, with 9 exons, produces 12 alternatively spliced isoforms of CEACAM1. The seventh exon, 53 bp long, is located at the intracellular end of CEACAM1. The protein sequences encoded by the 7th exon can be removed through selective splicing, generating two transcription products, CEACAM1-L and CEACAM1-S (3).

The roles of CEACAM1 in tumorigenesis and cancer progression are still unclear. CEACAM1 is down-regulated in breast cancer, colorectal cancer, hepatocellular carcinoma, renal cell carcinoma, prostate cancer, and bladder cancer (7-13). However, in pancreatic cancer, gastric cancer, malignant melanoma, thyroid cancer, and lung cancer, CEACAM1 is up-regulated (14-18). CEACAM1 expression is associated with an adverse prognosis in SCC of larynx and tongue (19,20).

Therefore, the above data indicate that CEACAM1 might be a useful diagnostic and prognostic molecular marker in ESCC.

What is more, CEACAM1 has a promoting effect on tumor angiogenesis (21). Angiogenesis is a key process in tumorigenesis and progression which is delicately regulated by angiogenic activators and inhibitors (22,23). In this process, cell adhesion molecules play important roles in vascular morphogenesis and endothelial signaling transduction (24). CEACAM1 is one of the adhesion molecules with pro-angiogenic activity. As a major effector of vascular endothelial growth factor (VEGF), CEACAM1 acts as pro-angiogenic factor and supports VEGF-induced endothelial tube formation. Overexpression of CEACAM1 expression induces up-regulation of angiogenic factors such as VEGF, angiopoietin-1 and -2, and this effect can be abolished by application of CEACAM1 antibody, illustrating the pro-angiogenic activity of CEACAM1 (25,26).

The prognostic role of MVD in cancer is still controversial. However, a recent meta-analysis by Ma et al. showed that high MVD correlate with poor prognosis in ESCC, and a study by Wu et al. revealed that MVD was associated with the T-stage of ESCC (27), suggesting that MVD could be a reliable prognostic factor of ESCC, consistent to the result of our study (28).

CEACAM1 represents a novel multi-purpose therapeutic target for cancer immunotherapy (29,30). CEACAM1 serves as a heterophilic ligand for TIM-3 that is required for its ability to mediate T-cell inhibition. Co-blockade of CEACAM1 and TIM-3 leads to the enhancement of anti-tumour immune responses with improved elimination of tumours in mouse colorectal cancer models (30). Ortenberg R (31) found that the monoclonal antibody (MRG1) could block CEACAM1 function in vivo. CEACAM1 blockade efficiently decreases the growth of melanoma xenografts by induction of specific T-cell–mediated tumor cell apoptosis.

CEACAM1 was reported as a strong clinical predictor of poor prognosis in tumor, since it promoted tumor angiogenesis. Meanwhile, CEACAM1 involves in tumor immune regulation. Identification of CEACAM1 as a prognostic factor in ESCC will provide new insights for diagnosis and prognosis. The results of our study demonstrated a critical role of CEACAM1 in angiogenesis of ESCC progression, thus suggesting that CEACAM1 could be a potential therapeutic target for ESCC.

Reporting Checklist: The authors have completed the REMARK reporting checklist. Available at http://dx.doi.org/10.21037/tcr-19-2039

Conflicts of Interest: All authors have completed the ICMJE uniform disclosure form (available at http://dx.doi.org/10.21037/tcr-19-2039). The authors have no conflicts of interest to declare.

Ethical Statement: The authors are accountable for all aspects of the work in ensuring that questions related to the accuracy or integrity of any part of the work are appropriately investigated and resolved. The study involving human subjects was approved by the Ethics Committee of Zhangjiagang Hospital of Traditional Chinese Medicine affiliated to Nanjing University of Chinese Medicine (No. 2018-S1072) and conducted in accordance with the Declaration of Helsinki (as revised in 2013). All patients were consent informed.