Osteosarcoma is a malignant tumor originating from mesenchymal tissue (1). The metaphysis of long bones in adolescents has a high malignancy, and lung metastasis can occur early, with a poor prognosis (2). At present, comprehensive treatment with chemotherapy and surgical resection as the core have been used to prolong the survival time of patients (3). However, because many mechanisms have not been resolved in the process of osteosarcoma development, osteosarcoma still has postoperative severe tumor recurrence and metastasis. Problems affecting the prognosis of patients (4). Most patients with osteosarcoma have tumor suppressor gene suppression, including retinoblastoma (Rb) and phosphatase and tensin homolog (PTEN), high activation of the protein kinase B (AKT) pathway, and mutation of TP53 in some patients.

MicroRNAs (miRNAs) are non-lengths of 18 to 25 nt and encode small molecule RNAs (5). miRNAs combine with the target gene mRNA through base-pairing to degrade the target mRNA or inhibit its translation (6). During the development of osteosarcoma, the expression of various miRNA changes and the upregulated or downregulated miRNAs are widely involved in the occurrence, development of osteosarcoma (7). After searching the GEO database, we found that miR-214-3p was significantly upregulated in osteosarcoma (8). Moreover, miR-214-3p is one of the miRNAs with oncogene properties that are important in the process of various cancers (9). The miR-214-3p level is markedly increased in osteosarcoma (9,10).

Formononetin (FN) is the active ingredient of traditional Chinese medicine astragalus, angelica, and Pueraria lobate (11,12). It belongs to isoflavone phytoestrogen and has pharmacological activities, including anti-oxidation, enhanced immunity, and anti-inflammatory (13,14). Studies have found that FN can show satisfactory anticancer effects in ovarian cancer, colorectal cancer, and gastric cancer by suppressing cell viability and inducing apoptosis (15,16). However, the effect and mechanism of FN on osteosarcoma cell proliferation and apoptosis are not apparent.

Therefore, this study hypothesized that the function of FN in MG-63 cells might be related to miR-214-3p/PTEN. The in vitro experiments were performed in MG-63 cells. Our experiment shows crucial opinions into the role of FN on the progress and development of osteosarcoma cells.

We present the following article in accordance with the MDAR reporting checklist (available at http://dx.doi.org/10.21037/tcr-20-2296).

A caspase-3 assay kit evaluated the apoptosis (Beyotime, Shanghai, China). Caspase 3 belongs to the CED-3 subfamily of the Caspase family and is a protease that plays an important role in the process of apoptosis (17). Caspase 3 Assay Kit is based on Caspase 3 which can catalyze the substrate acetyl-Asp-Glu-Val-Asp p-nitroanilide (Ac-DEVD-pNA) to produce yellow p-nitroaniline (pNA), which has strong absorption around 405 nm The activity of Caspase 3 can be detected by measuring absorbance (yellow product is proportional to the activity of Caspase 3 enzyme). The MG-63 cells were treated with paraffin in 96-well plates for 90 minutes and passed through 80 µL of reaction buffer (caspase-3 substrate, 2 mmol/L, 10 µL). Ten µL of cell lysate protein was incubated in each sample in an incubator (37 °C, 5% CO2) for 2 h. Used R&D Systems’ colorimetric assay kit (Thermo Scientific, USA) to measure samples at 405 nm.

The miR-214-3p putative binding site with wild type (WT) and mutant type (MUT) of PTEN 3'-UTR were combined and cloned into the pmirGLO dual-luciferase reporter vector (YouBio, Changsha, China). The reporter vectors (NC-mimic, miR-214-3p mimic, MUT, and WT 3'-UTR of PTEN) were co-transfected into HEK293T cells. After 48 h, the activity of luciferase was evaluated by a dual luciferase assay (Promega, Madison, USA), standardized as Renilla luciferase.

The GraphPad 8.0 was used for statistical analysis. All data were expressed as an independent experiment three times and shown as mean ± standard deviation (SD). Statistical analysis following with the ANOVA and the P<0.05 of data were considered significant.

To evaluate the inhibitory role of FN on the cell viability of MG-63 cell treatment of FN (0, 15, 30, and 45 µM) for 48 h and then evaluated by MTT assay. As compared to the control group, as the FN concentration gradually increased, the cell viability was markedly inhibited (Figure 1A). After MG-63 cell treatment of FN, a definite increase in the number of apoptotic cells with 45 µM FN was found (P<0.05) (Figure 1B). The data showed that FN-induced apoptosis with dose-dependent. Then, qRT-PCR analysis on miR-214-3p and PTEN expressions after treatment of FN (0, 15, 30, and 45 µM) were also detected, and results exhibited the miR-214-3p level was markedly reduced and PTEN level was markedly improved by FN treatment with dose-dependent (Figure1C). Differently, the PTEN level was improved after the treatment of FN (Figure 1D). 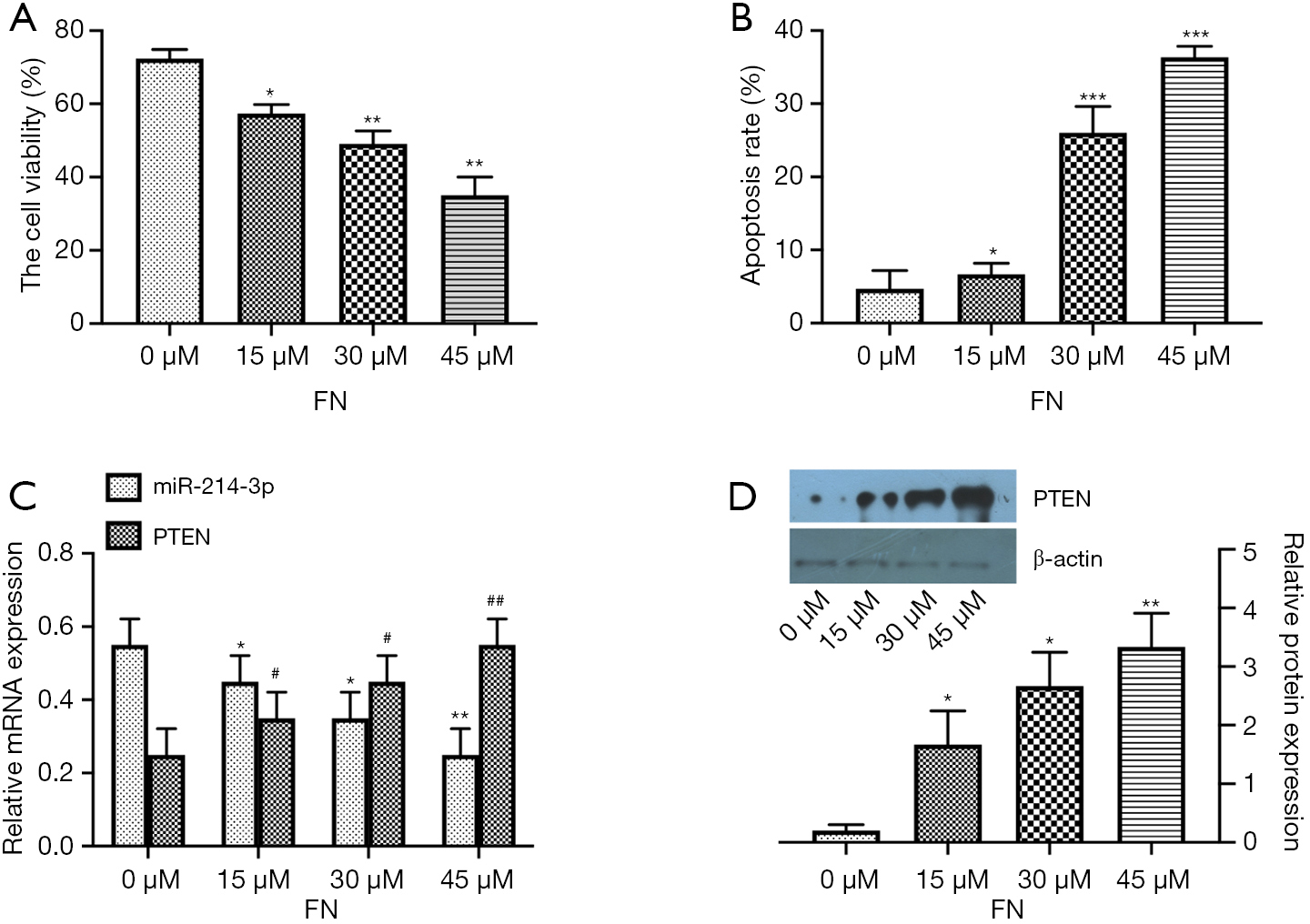 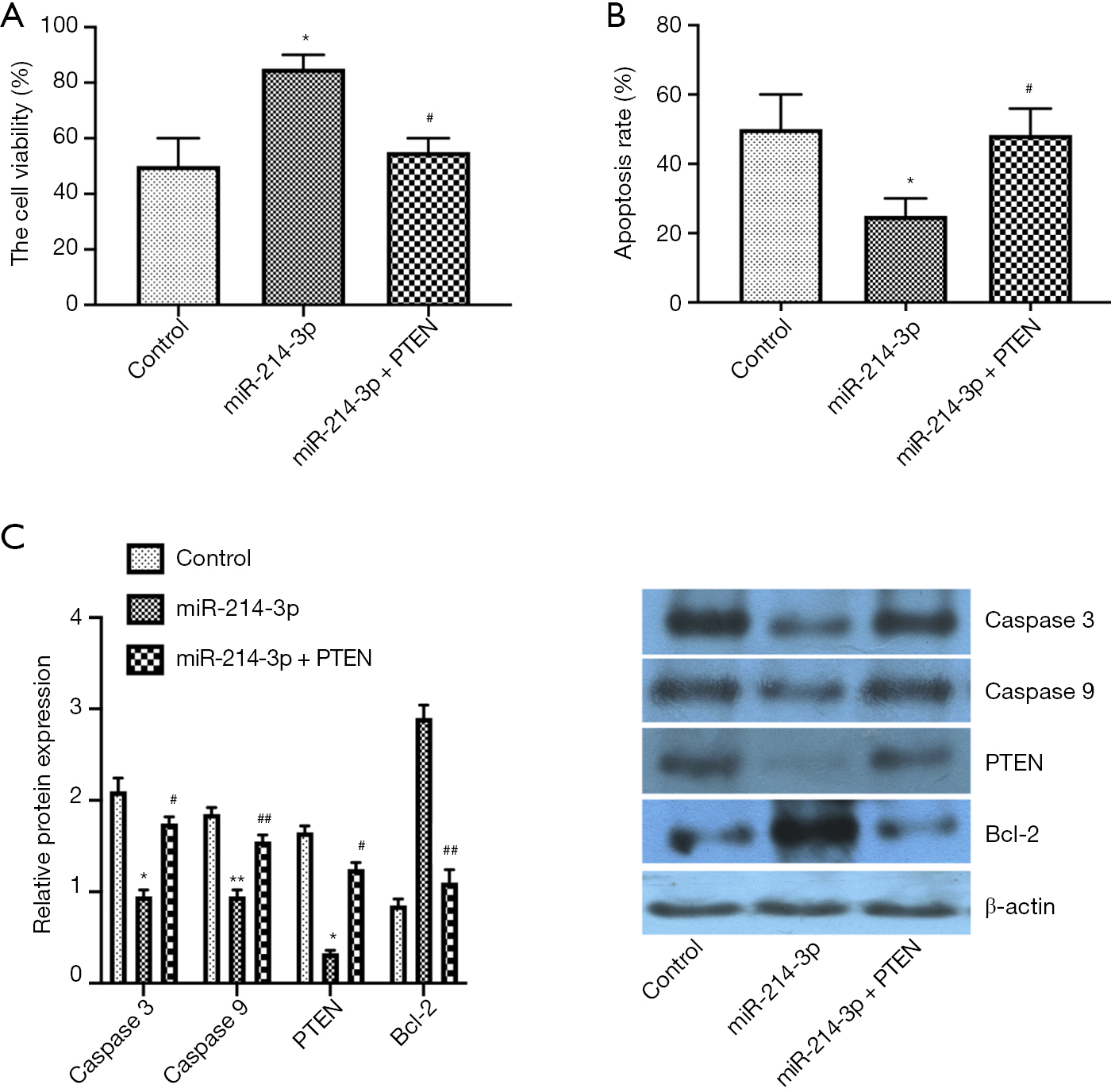 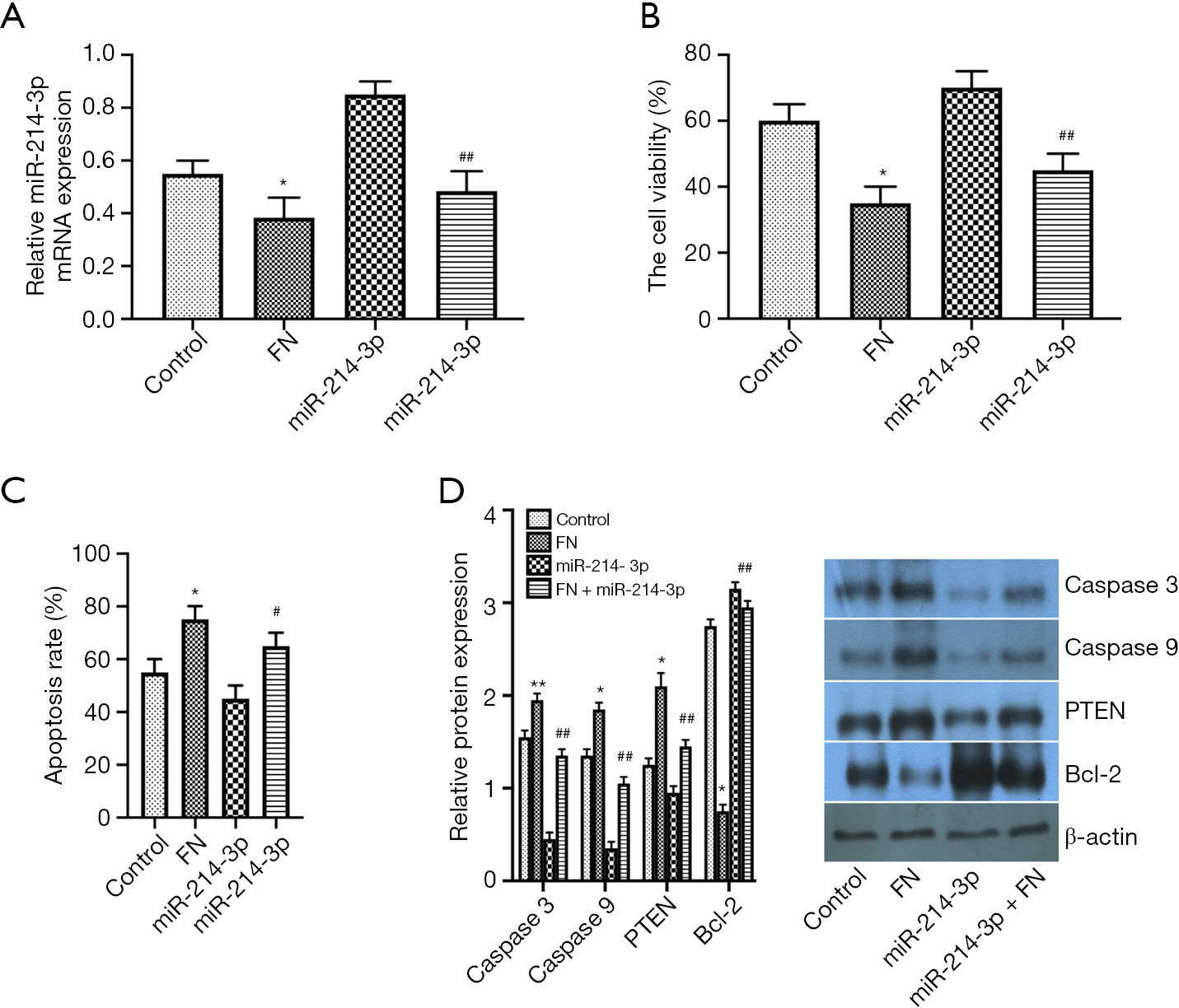 miR-214-3p is one of the miRNAs with oncogene properties that are important in the process of various cancers (9). The miR-214-3p level is markedly increased in osteosarcoma (9,10). Liver cancer has been shown to have oncogene capabilities. For example, in liver cancer, miR-214-3p bonds directly with Wnt3a to improve the proliferation (22,23). Recent reports have found miR-214-3p regulates Wnt3a in osteosarcoma (9). miR-214-3p participates in the growth and metastasis of cancers through targeted regulation of the critical tumor suppressor gene PTEN (24). PTEN is a crucial tumor inhibitor gene and is closely related to various tumors (25). PTEN is the most critical upstream molecule in the protein kinase B (AKT) pathway, and it plays a role in inhibiting AKT phosphorylation through dephosphorylation/proximal interphalangeal joints 3 (PIP3) (26). Disturbance of the phosphatidylinositol 3 kinase (PI3K)/AKT signaling is widespread in many cancers, which inhibit apoptosis, promote cell viability, affect synthesis and sugar metabolism (27). PTEN was predicted to be a binding site of miR-214-3p by TargetScan database, and miR-214-3p levels were significantly increased in MG-63 cells transfecting with miR-214-3p mimic. However, the PTEN level was significantly decreased by a miR-214-3p mimic. Moreover, the activity of luciferase was treatment with miR-214-3p mimic and WT-PTEN 3'-UTR vector as compared to that treatment of miR-214-3p mimic and MUT-PTEN 3'-UTR.

Classical apoptosis pathways include endogenous mitochondrial cytochrome release signaling and exogenous death receptor signaling. Existing research shows that these two pathways are not independent, but interrelated and intertwined, and these two pathways will eventually activate and wither end-of-life effect enzyme caspase 3 (28-30). The Bcl-2 and Bax expressions were changed markedly through western blot and qRT-PCR. The mitochondrial-mediated apoptosis pathway is regarded as a critical center of apoptosis and is only regulated by the proteins of the Bcl-2 family (31). Bcl-2 is one of the most critical inhibitors of apoptosis, and Bax promoted apoptosis, a critical factor that determines whether cells survive or die (32). In the current study, overexpressed miR-214-3p improved cell viability and suppressed apoptosis of MG-63 by inhibiting PTEN expression. Moreover, FN inhibited proliferation and induced apoptosis of MG-63 by regulating miR-214-3p.

Our results showed that FN might be acting as a novel treatment for MG-63 through the up-regulation of PTEN expression via miR-214-3p.

Reporting Checklist: The authors have completed the MDAR reporting checklist. Available at http://dx.doi.org/10.21037/tcr-20-2296

Conflicts of Interest: All authors have completed the ICMJE uniform disclosure form (available at http://dx.doi.org/10.21037/tcr-20-2296). The authors have no conflicts of interest to declare.