Prostate cancer (PCa) is the most common malignancy in the male genitourinary system, making up about 15% of all malignant tumors in the world (1,2). In 2019, it is estimated that there are 174,650 men newly diagnosed with PCa and 31,620 deaths of PCa in the United States (3). In spite of increased screenings by prostate-specific antigen (PSA), a fair proportion of patients are still at high-risk stages (4). Although many risk stratification schemes and nomograms have been reported recently (5,6), the most commonly used stratification is still the one developed by D’Amico et al. (7-9). With the PSA concentration, Gleason score (GS) and tumor-node-metastasis (TNM) staging, the non-metastasis PCa is commonly classified into low-risk, intermediate-risk and high-risk groups. The high-risk group accounts for about 15% of PCa diagnoses, and is characterized by recurrence and high cancer-related death. It is one of the important causes of death in PCa diseases (10).

A nomogram is a convenient tool for predicting the probability of certain clinical events in an individual patient. It can also be useful for clinical risk stratification, decision-making and personalized treatment. The Surveillance, Epidemiology and End Results (SEER) program covers approximately 28% of all cancer cases of the US population. It incorporates patient demographics, tumor characteristics and treatment from population-based cancer registries.

The aim of this study was to analyze the prognosis of men with all possible high-risk PCa groups, and to construct a predictive model of nomograms to predict survival rates of men with high-risk PCa. We present the following article in accordance with the STROBE reporting checklist (available at http://dx.doi.org/10.21037/tcr-20-1578).

The data of this study were derived from the SEER database. This database is a population-based cancer registry system. At present, the database has covered about 29% of cancer patients in the United States, and is one of the most representative large-scale cancer case registration databases in the United States (14). Men with primary PCa diagnosed by prostate puncture or transurethral resection of prostate were retrospectively identified from January 1, 2004, to December 31, 2015. This study was conducted in accordance with the Declaration of Helsinki (as revised in 2013).

Patients were considered eligible if they met the following criteria: (I) primary non-metastasis PCa (cT1–4N0M0). (II) Patients met the definition of high-risk PCa: PSA >20 ng/mL, or GS ≥8, or ≥T3a. (III) The survival status at the end of the follow-up were clearly known.

The following criteria were used for data exclusion: (I) multiple tumors; (II) the information of age, PSA, TNM stage, GS or follow-up time were unclear or incomplete.

The general characteristics, tumor information, and survival outcomes were collected.

The main outcomes in this study were overall survival (OS) and prostate cancer-specific survival (PCSS). The survival time was defined as the time from the patient’s first diagnosis to the patient’s death or the last follow-up time (December 31, 2015).

Baseline characteristics including age, race, marital status, T stage, GS, PSA level, and follow-up time were described in different high-risk groups. The Kaplan-Meier analysis was adopted for the OS and PCSS of men in all high-risk groups. The 5- and 10-year OS and PCSS rate of all groups were calculated with survival tables. Long rank P values were calculated to determine the statistical significance. Univariate Cox regression model was used to evaluate each variable’s parameter in predicting OS and PCSS. Multivariate Cox regression model was conducted for the variables with P<0.05 in univariate analyses.

A nomogram model was built with the coefficients of each factor in the multivariate Cox analysis. Verifications of the nomogram model were performed with the concordance index (C-index), and calibration curves. A C-index was used to evaluate the predictive accuracy of the nomogram. Five- and 10-year calibration curves were conducted to compare the predicted probability with the observed probability.

All statistical analyses were performed with the software of SPSS version 25 and R software version 3.2.3. P<0.05 was considered statistically significant. 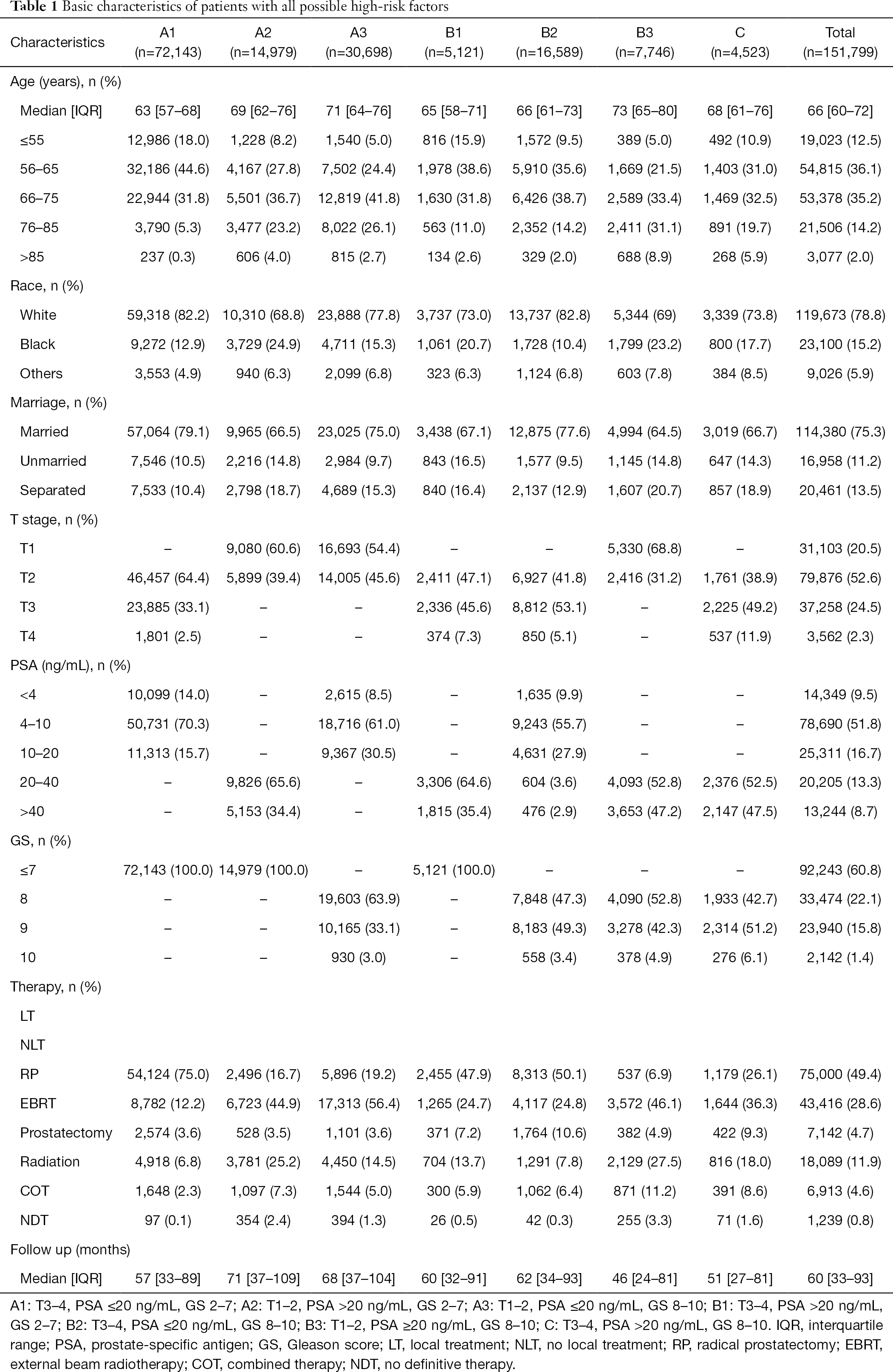 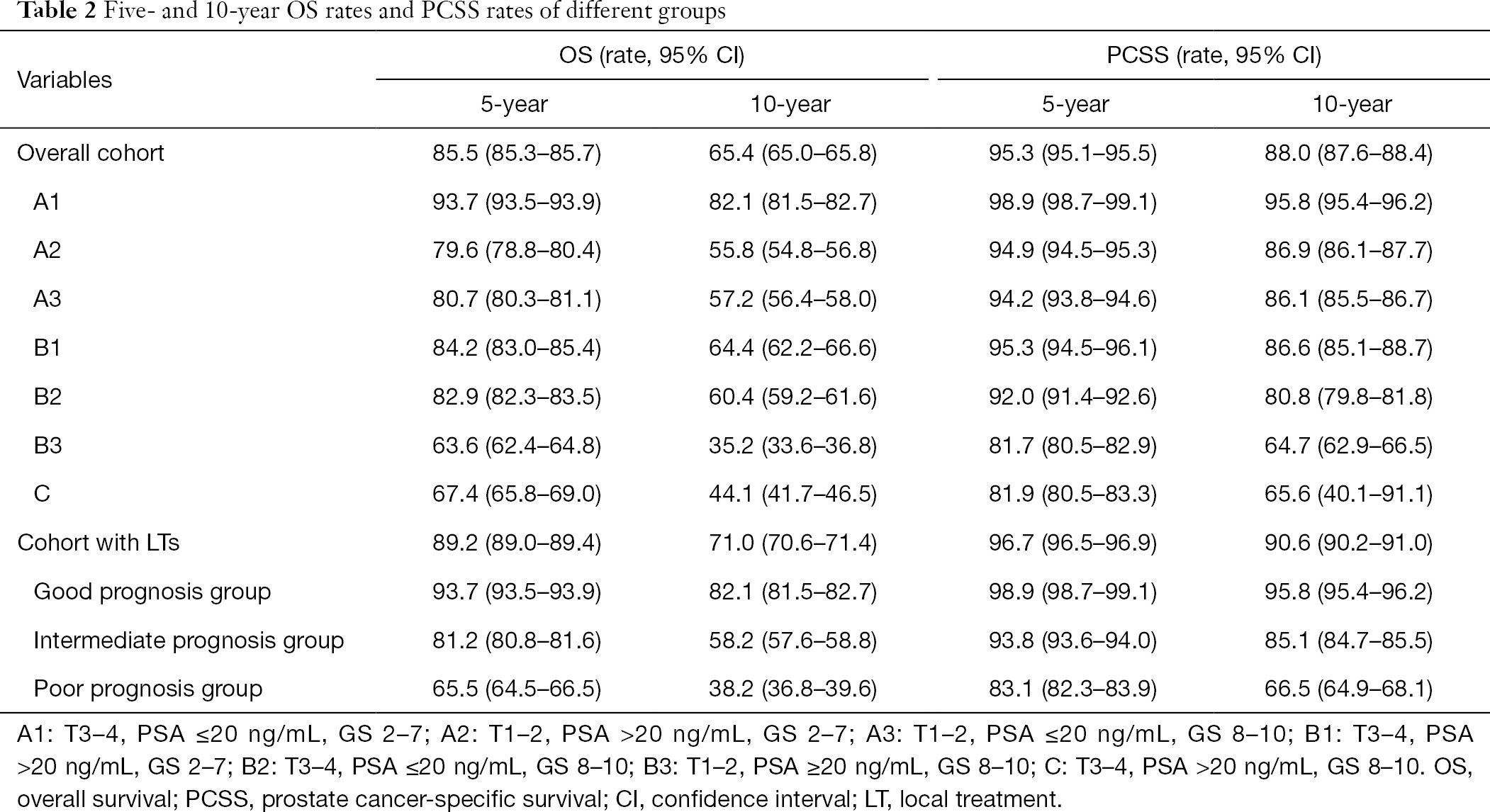 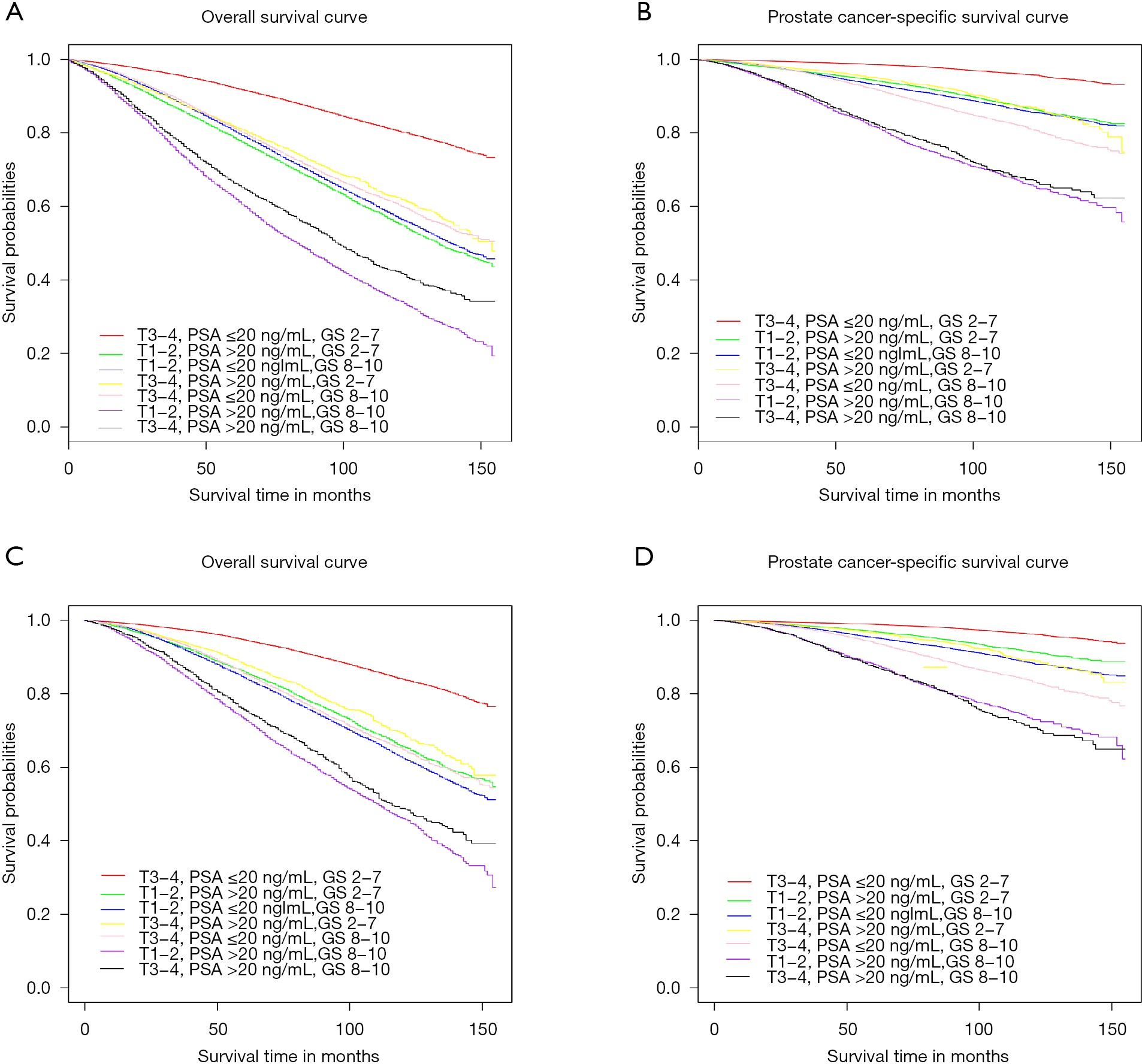 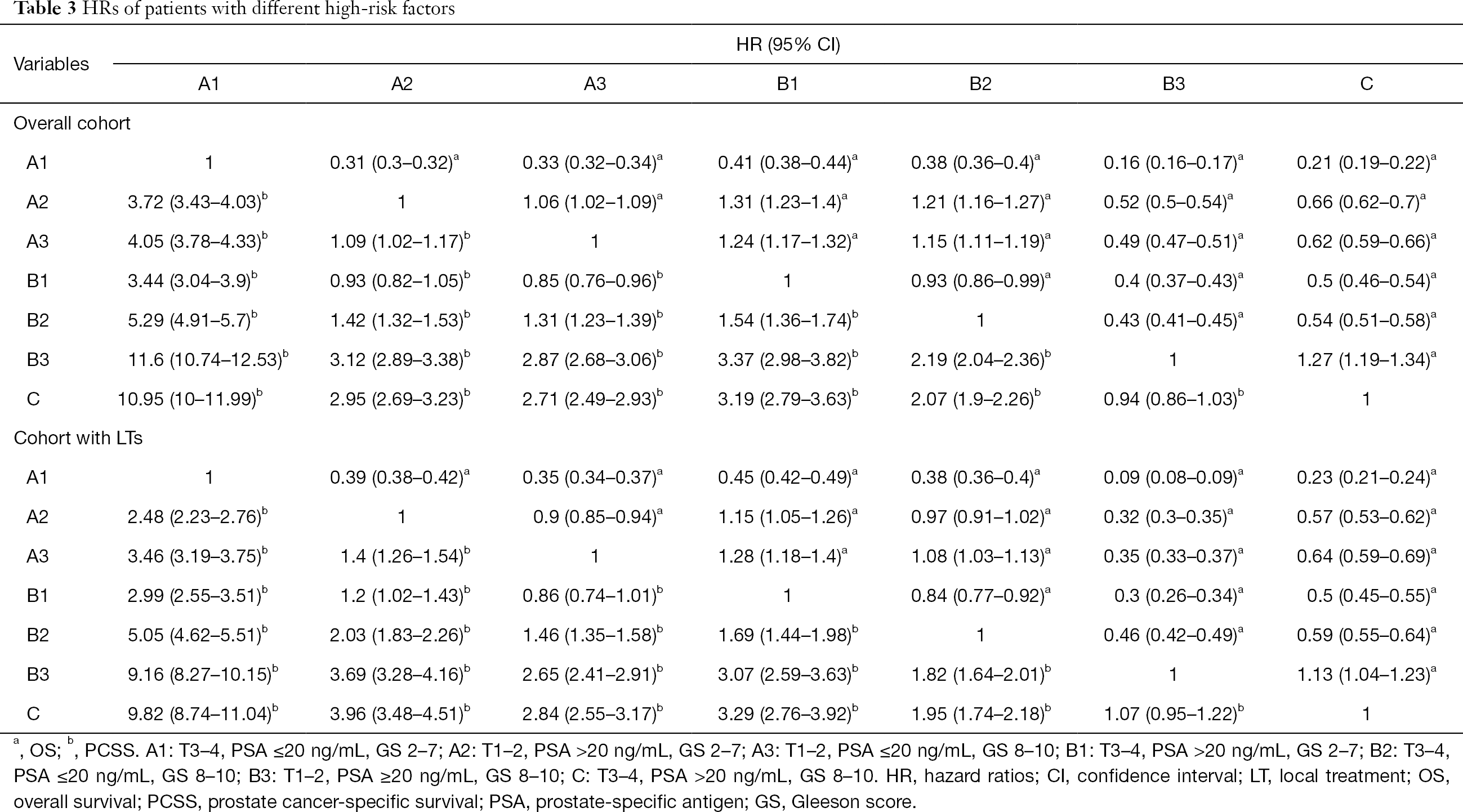 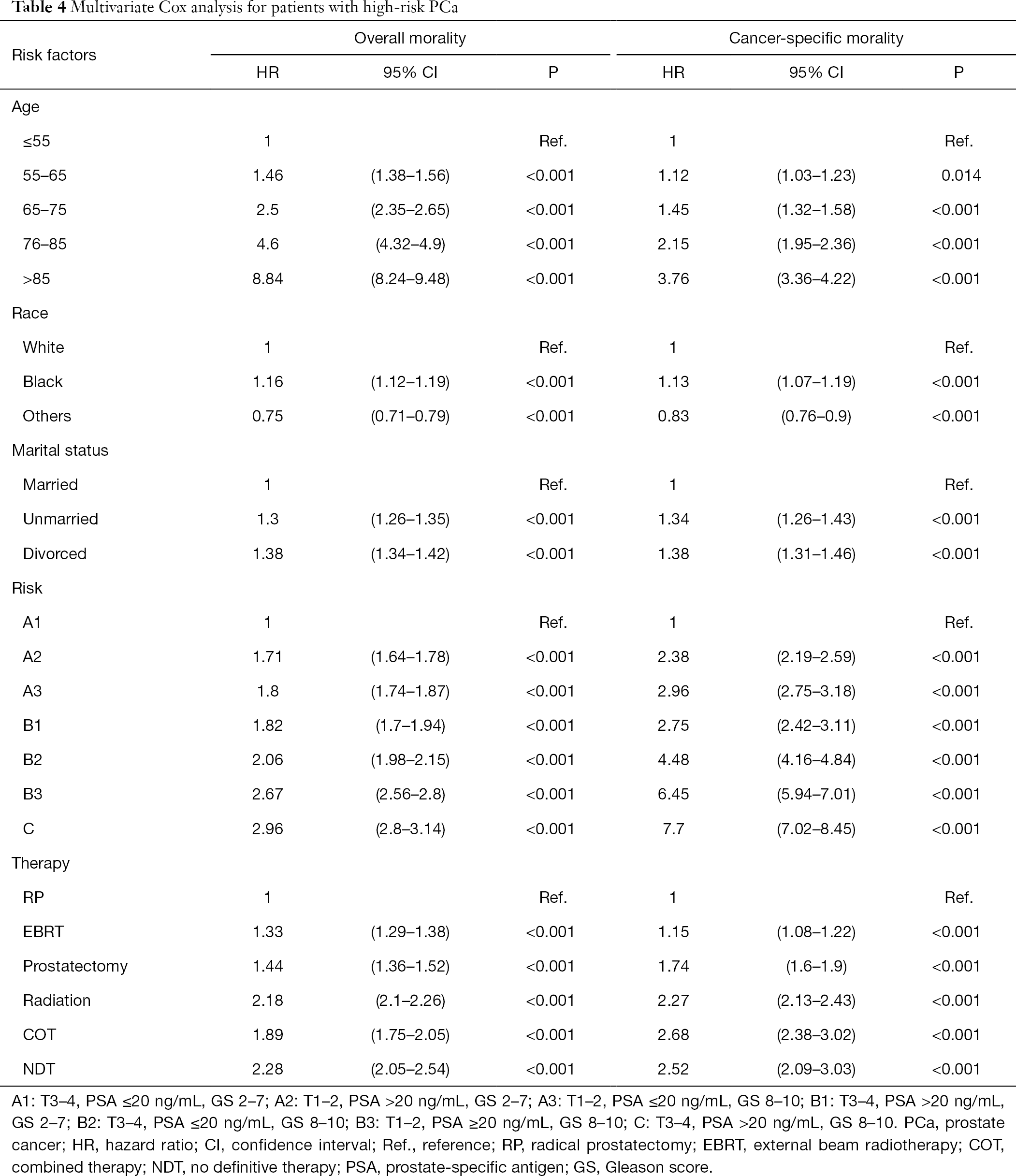 The predicting model of nomograms was built with the factors in the multivariate Cox analysis (Figure 3). The C-index of this nomogram was 0.773, indicating a good discrimination ability of this model. Five- and 10-year calibration curves (Figure 4) also revealed good agreement between the actual observation and the nomogram prediction. 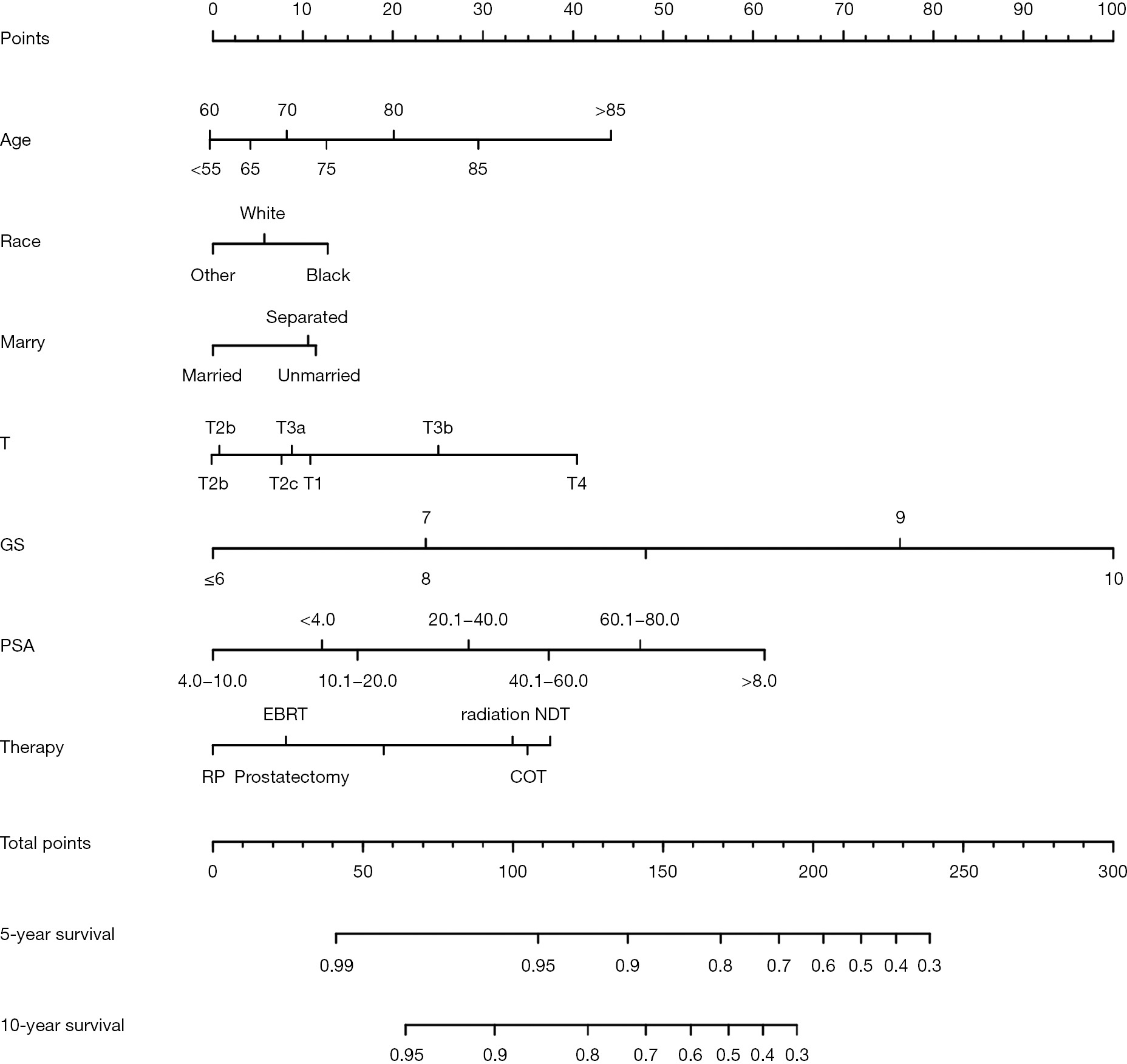 Figure 3 The nomogram model of predicting the probability of PCSS in men with high-risk PCa based on the factors of age, race, marital status, T stage, PSA, GS and therapy. Instructions: Locate the patient’s level of every factor on the axis. Draw a line straight upward to the point axis to determine the points received from each factor. Sum all points of each factor and locate the final sum on the total-point axis. Draw a line straight down to find the patient’s 5- and 10-year PCSS rates. PCSS, prostate cancer-specific survival; PCa, prostate cancer; PSA, prostate-specific antigen; GS, Gleason score. 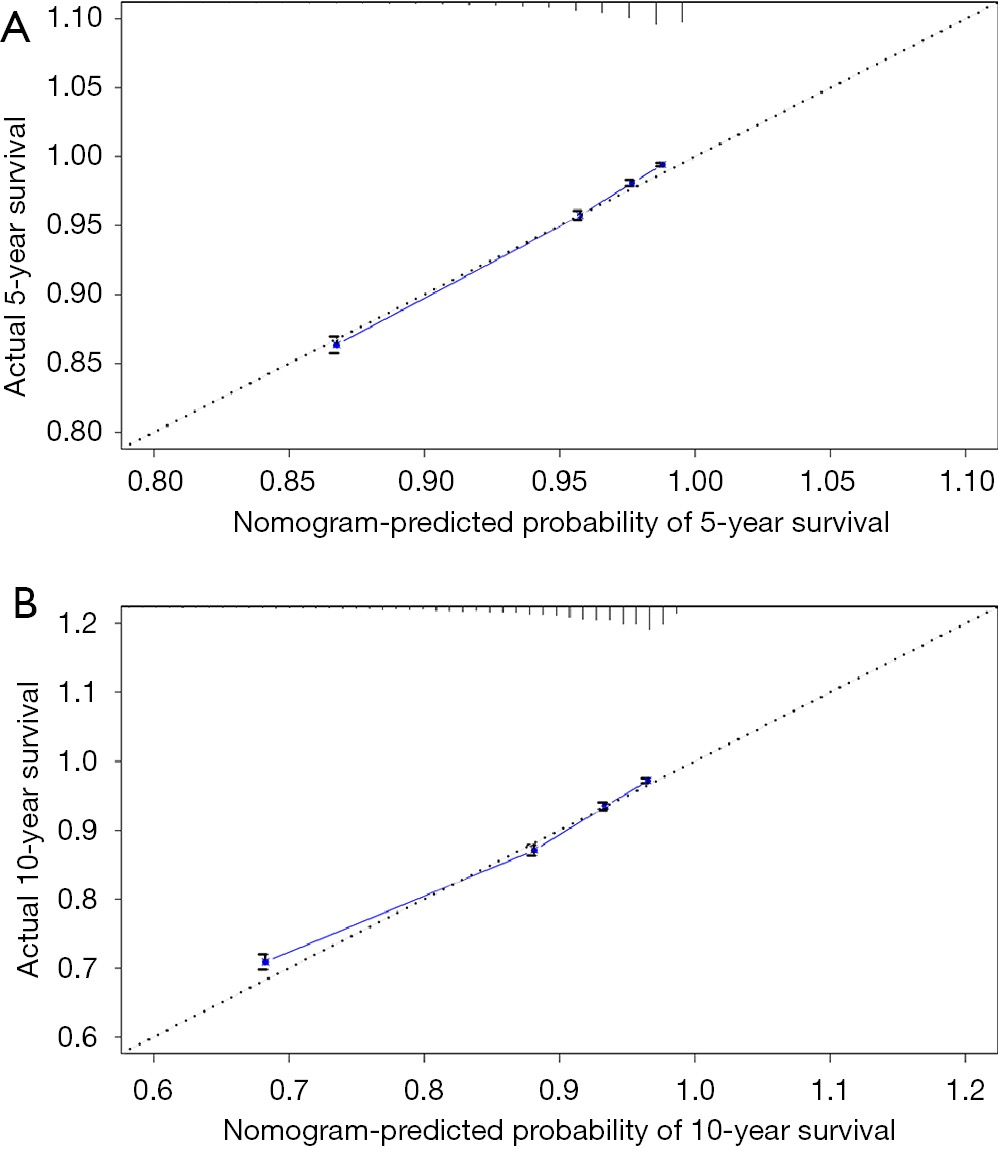 Univariate and multivariate Cox analysis showed that age, race, marital status, T stage, PSA level, GS, therapy were the independent risk factors of high-risk PCa. As for the marital status, some studies (25,26) reported it also affect the prognosis of patients. It was acknowledged that marriage likely serves as a multi-faceted proxy for many protective factors including psychosocial support, adherence to follow-up care guidelines along with choice of adjuvant and secondary therapy, healthy lifestyles as so on (27). The nomogram was constructed with risk factors in multivariate Cox analyses. This model is an intuitionistic and convenient tool for predicting survival rates. With this predicting model, the 5- and 10-year survival rates of each patient with high-risk PCa can be estimated. The C-index of our nomogram model was 0.773, indicating that the model has good accuracy. The 5- and 10-year calibration curves revealed a good agreement between the actual observation and the nomogram prediction.

However, there were some limitations in our study. Firstly, our study was a retrospective analysis in which there were some unavoidable confounders and risk biases. It may interfere with the results. Secondly, our nomogram model was built on high-risk populations and was only applicable to survival prediction of men with high-risk PCa. Thirdly, due to the limitations of the SEER database, many important endpoints such as BCR-free survival, progression-free survival could not be analyzed. Lastly, even though the survival results and the nomogram were conducted with a large cohort and the validation of the nomogram model seemed to be reliable, high-quality studies are still needed for further validations.

We would like to thanks the SEER program for providing the open-source data.

Reporting Checklist: The authors have completed the STROBE reporting checklist. Available at http://dx.doi.org/10.21037/tcr-20-1578

Conflicts of Interest: All authors have completed the ICMJE uniform disclosure form (available at http://dx.doi.org/10.21037/tcr-20-1578). The authors have no conflicts of interest to declare.

Ethical Statement: The authors are accountable for all aspects of the work in ensuring that questions related to the accuracy or integrity of any part of the work are appropriately investigated and resolved. All data comes from a public database, which removes all patient tags; no ethical approval is required. The study was conducted in accordance with the Declaration of Helsinki (as revised in 2013). Data for this study were obtained from the US NCI SEER database (https://seer.cancer.gov).