Hepatocellular carcinoma (HCC), which arises from the liver cells (hepatocytes) and accounts for around 80–90% of all liver cancers. The incidence of HCC is increasing by 3–9% year by year in global (1). HCC is one of the most malignant tumors and has the highest morbidity and mortality rates of any cancer worldwide, with the 5-year overall survival (OS) is less than 10% (2). Because the early-stage disease is usually asymptomatic, and the symptoms of early-stage disease are nonspecific, approximate half of patients are diagnosed at an advanced stage. Take the poor prognosis of HCC into account, effective biomarkers needed to be identified to guide individualized treatment of HCC patients and then improve their prognosis.

Many biomarkers, such as α-fetoprotein (AFP) and liver function, such as alanine aminotransferase (ALT) and aspartate aminotransferase (AST), have already been used to screen for HCC and choose the best treatment on an individual status. However, these biomarkers are not sufficient to predict prognosis accurately (3,4). Serum ferritin (FERR) is the oldest known protein involved in iron metabolism, and a multi-functional protein with possible roles in proliferation, angiogenesis, immunosuppression, and iron delivery. The abnormal FERR level has been shown to be closely correlated with tumor progression and prognosis in several cancers.

Kew MC declared that high level FERR is a potential biomarker for primary liver cancer (5), Weinstein RE reported that increased FERR contributed to the progression of breast cancer (6). The relationship between cancer and FERR is unclear. Furthermore, the iron accumulation is considered to play an important role in liver injury and hepatocarcinogenesis (7). Because the serum FERR is widely recognized as an acute phase reactant and marker of acute and chronic inflammation, and increased in the environment of inflammation (8), the level of FERR in HCC is influenced by tumor and inflammation. Owing to increasing evidence regarding the role of FERR in HCC, systemic biomarkers needed to be found to eliminate the effect of non-specific inflammation. Globulin, a predictor of inflammatory status, has been shown to be reflected poor OS of many cancers (9). Therefore, we have combined the FERR and globulin to provide a potent predictive system for the HCC prognosis after treatment.

In this study, the level of ferritin/globulin ratio (FGR) in HCC patients has been studied. To describe the association between FGR and HCC, we measured the FGR level in the pre-therapy serum of patients with HCC in comparison with those of healthy participants and performed a large-scale retrospective cohort analysis. The flowchart of our study is showed in Figure S1. We present the following article in accordance with the REMARK reporting checklist (available at http://dx.doi.org/10.21037/tcr-20-966). 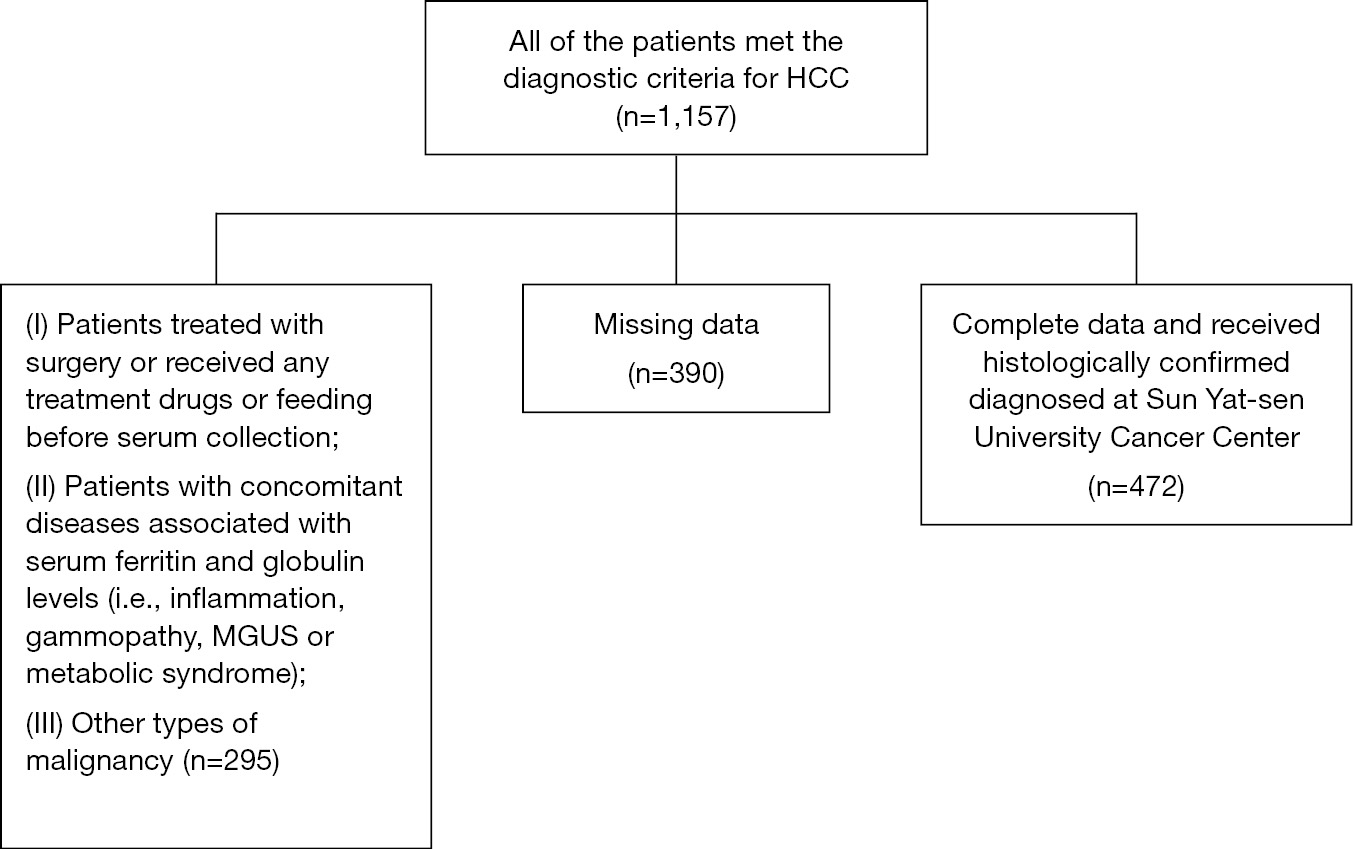 Figure S1 The flowchart of our study. HCC, hepatocellular carcinoma.

We retrospectively reviewed the clinical data of 472 HCC patients (420 men and 52 women; ages 19–88 years), who received histologically confirmed diagnosed at Sun Yat-Sen University Cancer Center from January 2009 and December 2012. As the Supplementary material shown the patients’ selection process and describe the figure. The main clinical characteristics are described in Table 1. All of the patients met the diagnostic criteria for HCC. Exclusion criterion were as follows: (I) patients treated with surgery or received any treatment drugs or feeding before serum collection; (II) patients with concomitant diseases associated with serum ferritin and globulin levels (i.e., inflammation, gammopathy, MGUS or metabolic syndrome); (III) other types of malignancy. HCC staging was performed by the American Joint Committee on Cancer Staging system (AJCC, 2002; Greene, American Joint Committee on Cancer. American Cancer Society, 2002). All patients received treatment, including surgery, transarterial embolization (TAE), ablation therapy. Patient characteristics, preoperative serum AFP levels, ferritin levels, globulin levels, FGR, postoperative OS and disease-free survival (DFS) survival were recorded. Alcohol index was assessed as drinking or not drinking. Prior to use of these serum, informed consent was obtained from each of the patients. A total of 300 healthy participants (251 men and 49 women; ages 23–79 years, median 54 years) free of tumor and nutritional diseases (i.e., inflammation, metabolic syndrome or feeding) were recruited from the physical examination department at Sun Yat-Sen University Cancer Center. The study was conducted in accordance with the Declaration of Helsinki (as revised in 2013). This study was approved by the Institute Research Ethics Committee of the Sun Yat-Sen University Cancer Center, Guangzhou, China (approval No. 2017-FXY-129).

Table 1 Characteristics and parameters of the HCC patients
Full table

The primary outcome of our study was OS, defined as the time between the first diagnosis of HCC and death, or date of the last follow-up. Relatively, the secondary outcome was DFS, calculated from the date of first diagnosis to the date of disease recurrence. After completion of primary treatment, patients were generally followed up every 3 months in the first 2 years, every 6 months for the following 3 to 5 years, and annually thereafter for patients without evidence of recurrence. The last follow-up was in December 2016. The survival status was verified through checking clinical attendance records or direct telecommunication with the patient or their family (performed by The Medical Information Unit in our Cancer Center).

As part of the physical examination, peripheral blood was collected from the patients between 7 and 8 a.m., before treatment, clotted at room temperature, and centrifuged at 3,500 r/min for 8 min. The levels of AFP and FERR were tested using ROCHE Modular Analytics E170 automatic electrochemistry analyzer (Basel, Switzerland). The level of ALT, AST and globulin were measured using a Hitachi 7600 automatic biochemical analyzer (Tokyo, Japan).

All statistical tests were performed with SPSS 16.0 for Windows software (SPSS, Chicago, IL, USA). Data were expressed as the mean and standard deviation (mean ± SD). The cut-off value of the lipid AFP, FERR, globulin, ALT, AST, FGR were categorized by receiver operating characteristic (ROC) curve statistical analyses. The correlation between OS, DFS and clinical characteristics was assessed using the Mann-Whitney U test. The differences between HCC patients and healthy donors were compared by the nonparametric test using Mann-Whitney U test. Univariate and multivariate analyses of clinical variables were performed using Cox proportional hazards regression models. The results of this survey were analyzed using the Kaplan-Meier survival curves with the log-rank test and proportional hazard model. The correlation between FGR and clinical characteristics was analyzed using the Mann–Whitney U test and χ2 test. P values were derived from two-sided tests and P values <0.05 were regarded as statistically significant.

The basic clinical characteristics in HCC patients and subgroup

Comparison of pre-treatment FGR between HCC patients and healthy controls 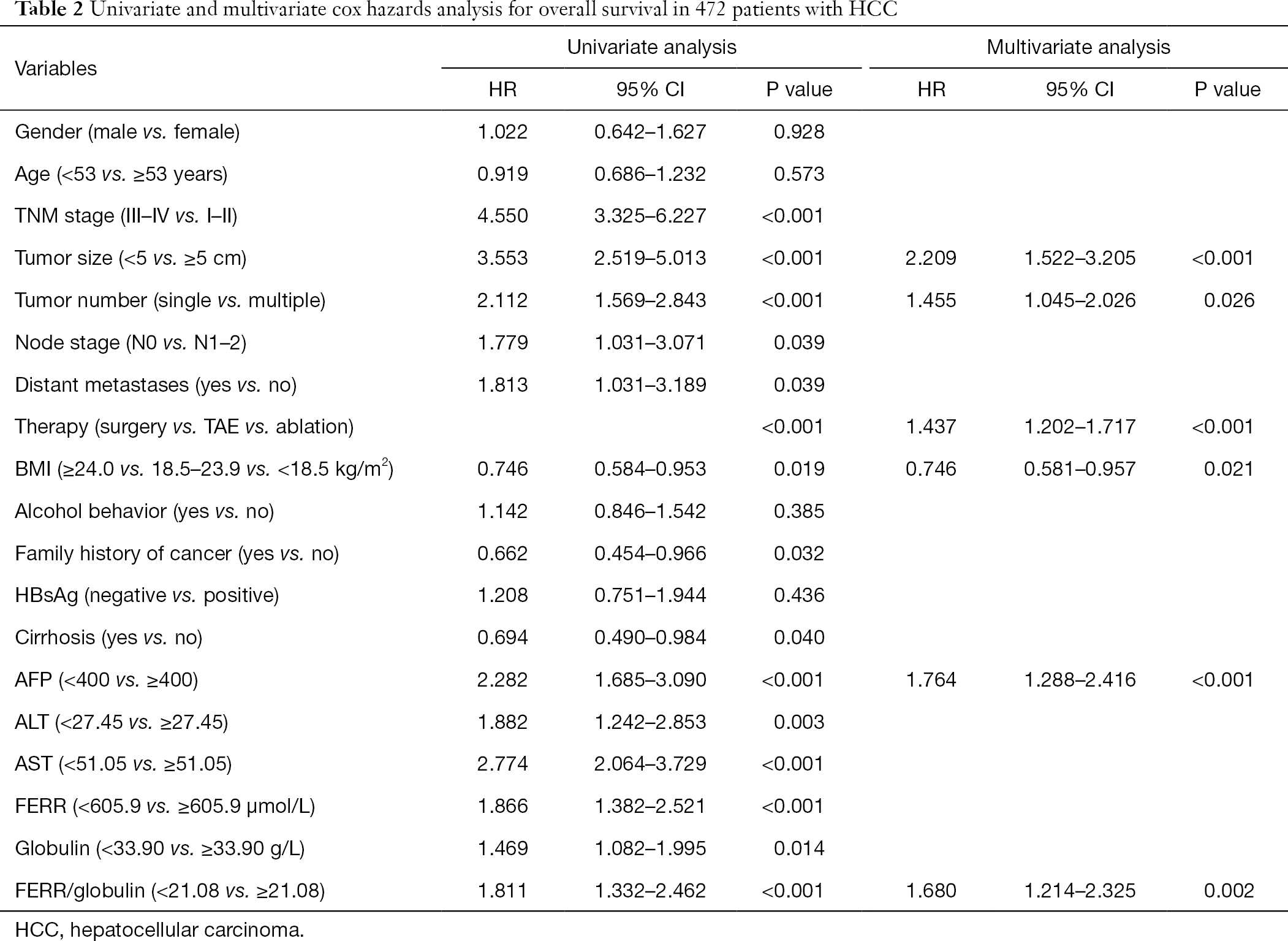 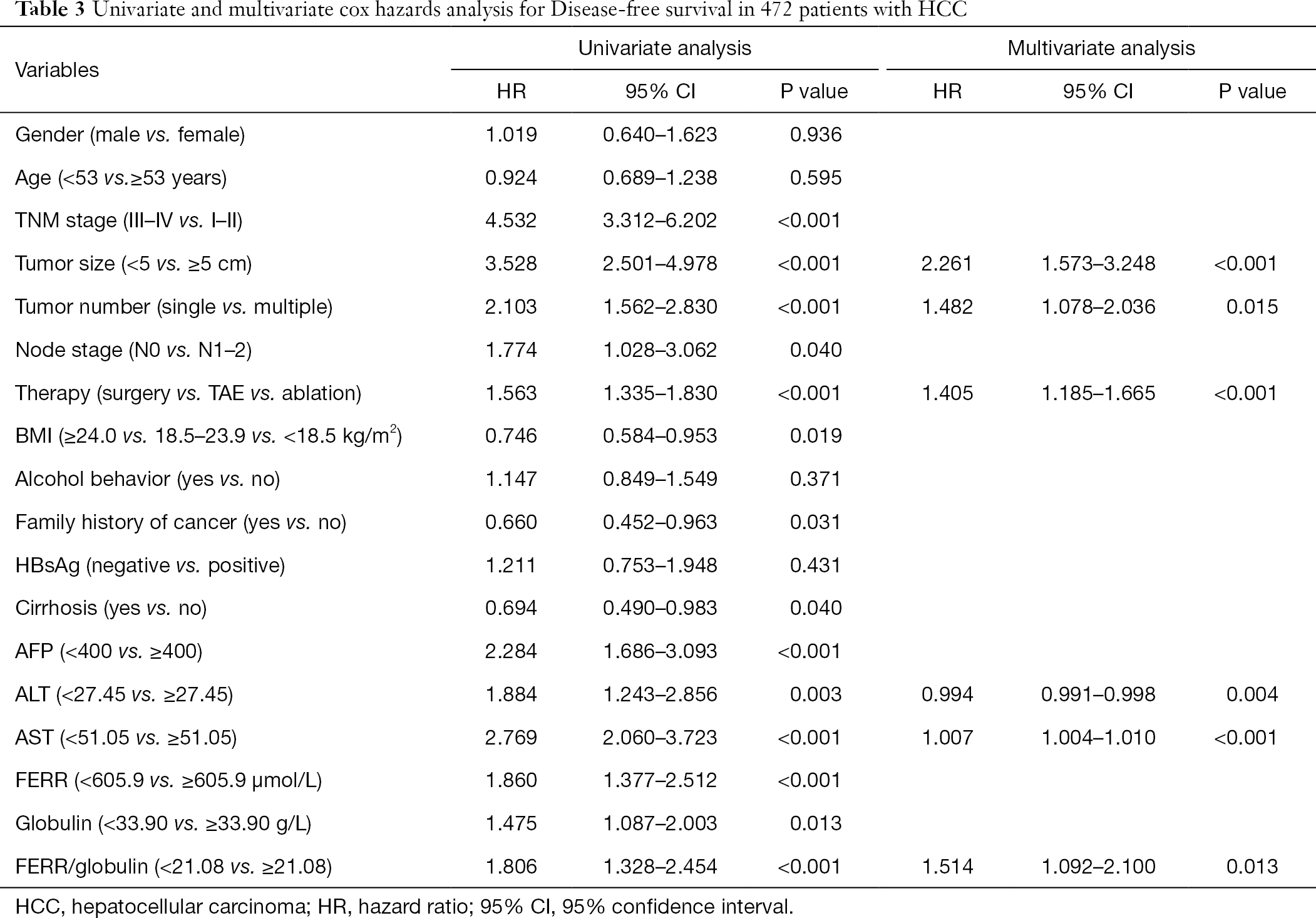 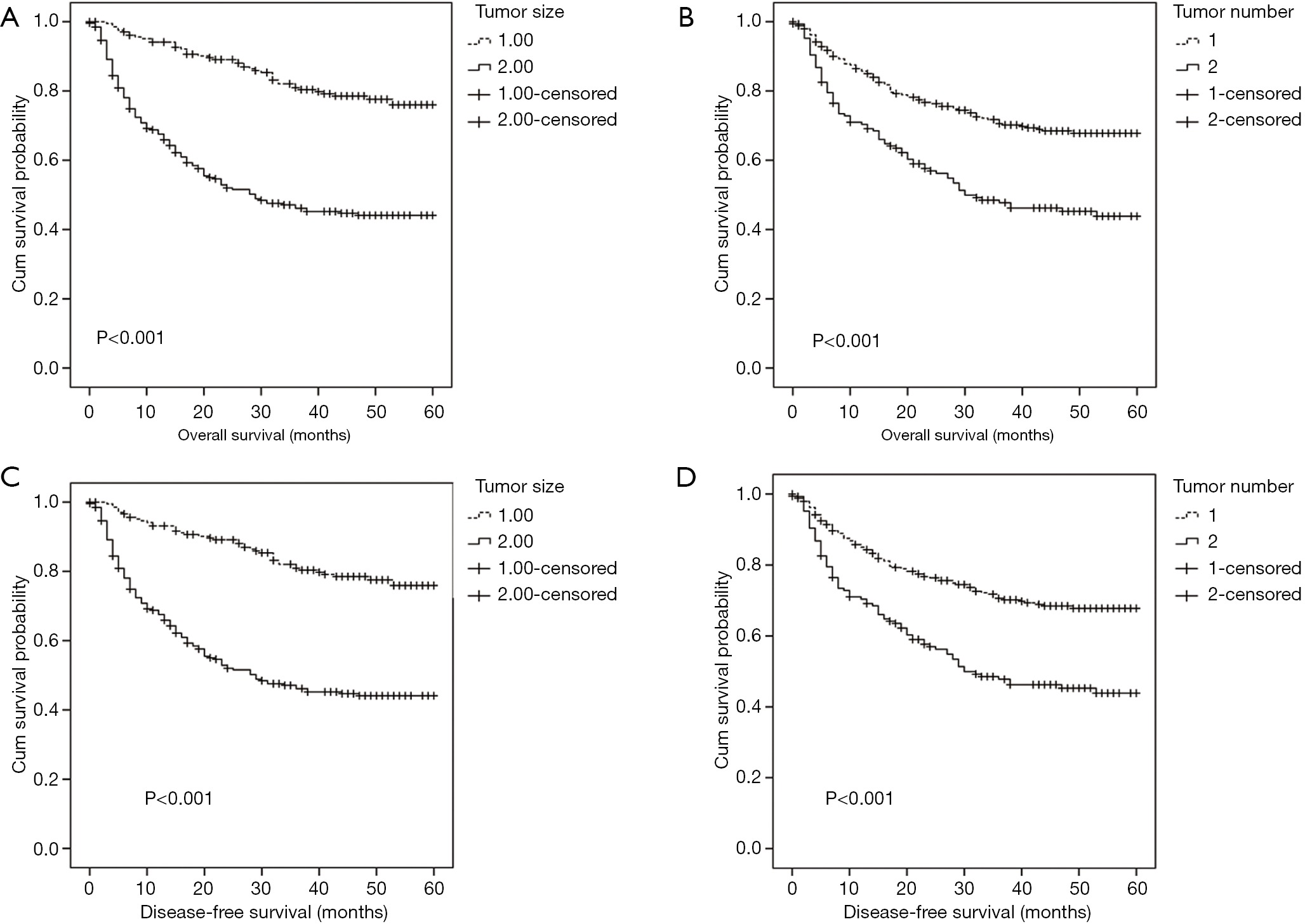 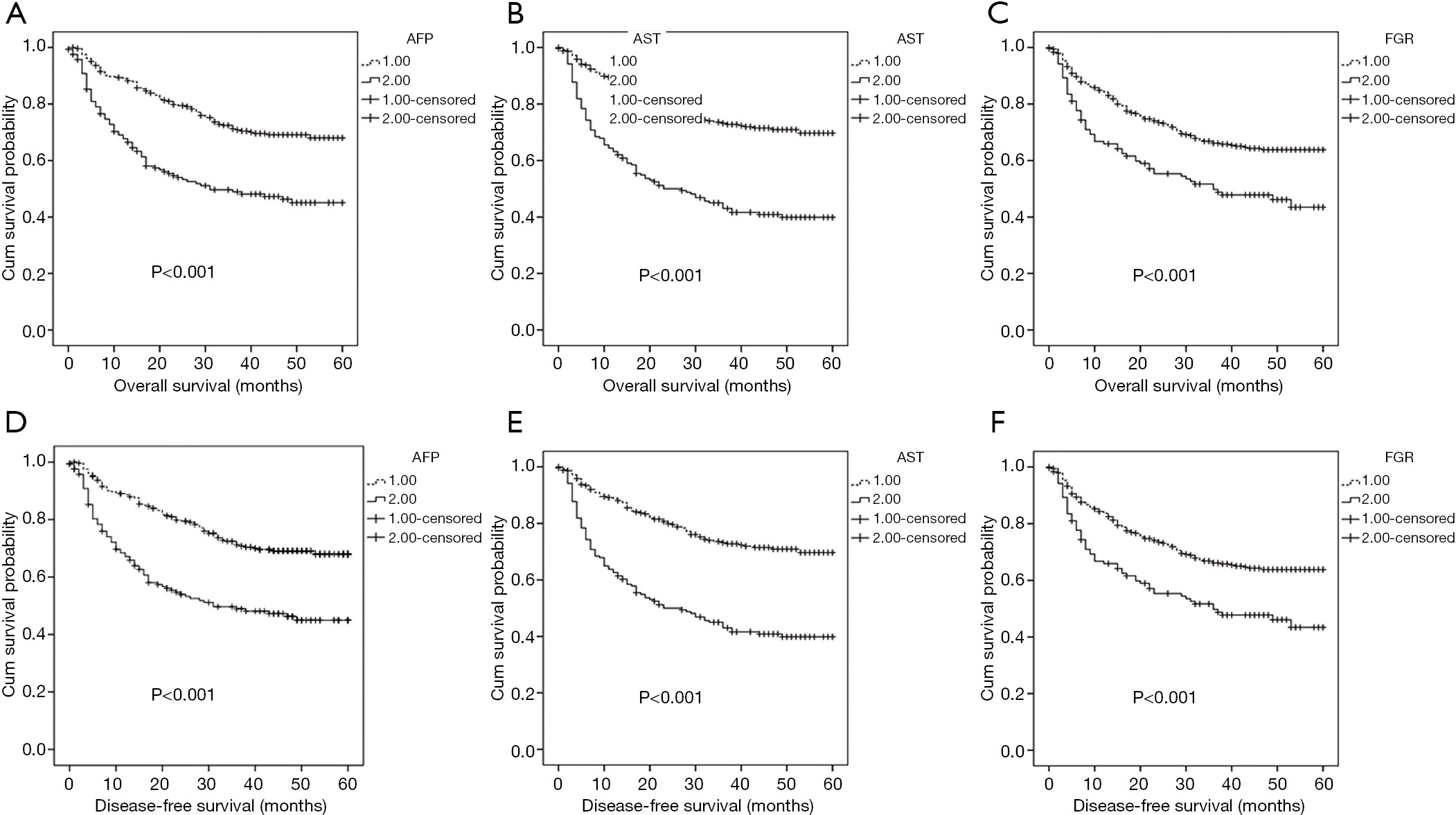 The relationship between the FGR and clinicopathologic characteristics in HCC patients 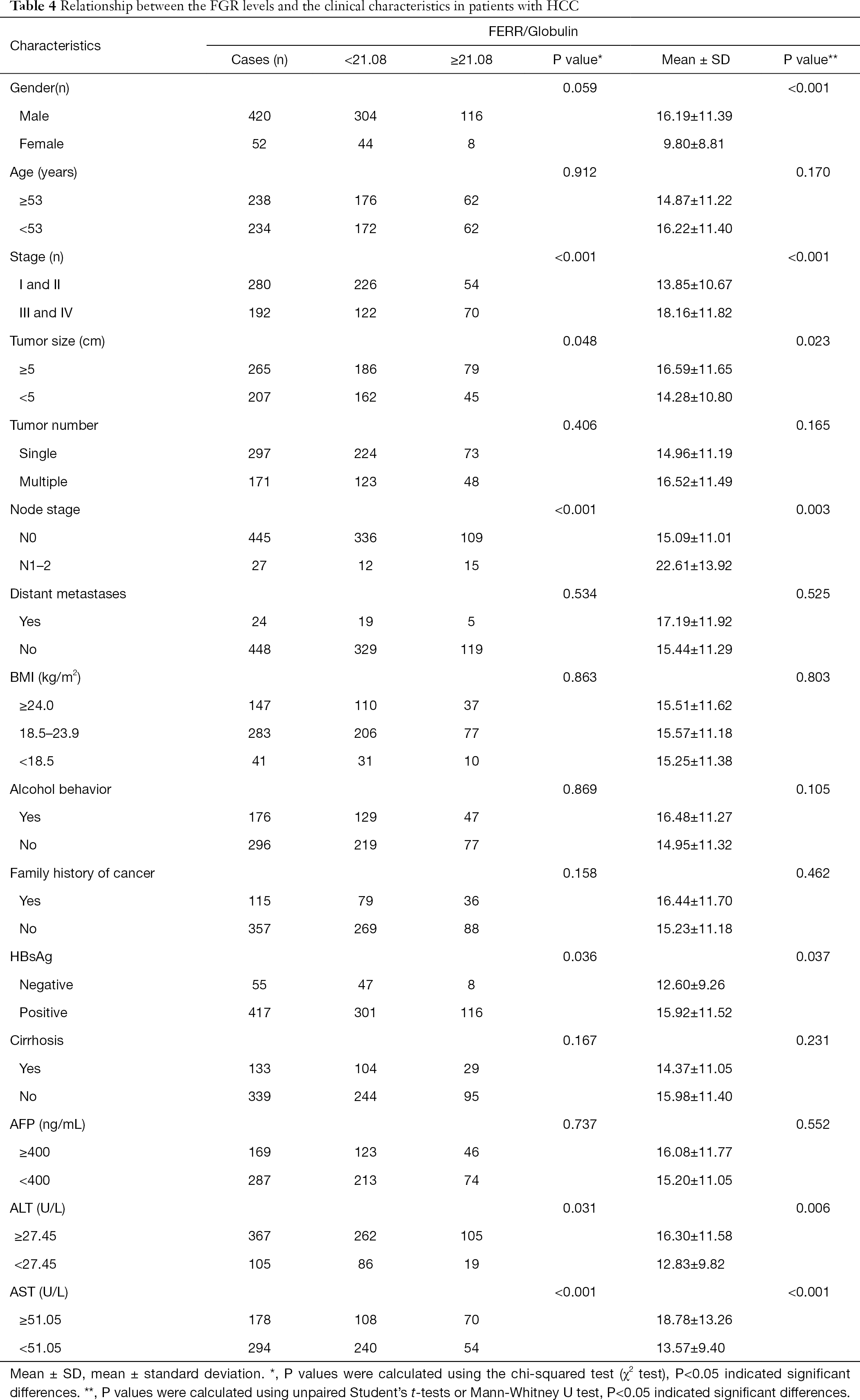 Prognostic significance of FGR according to pathological stage, ALT, and AST 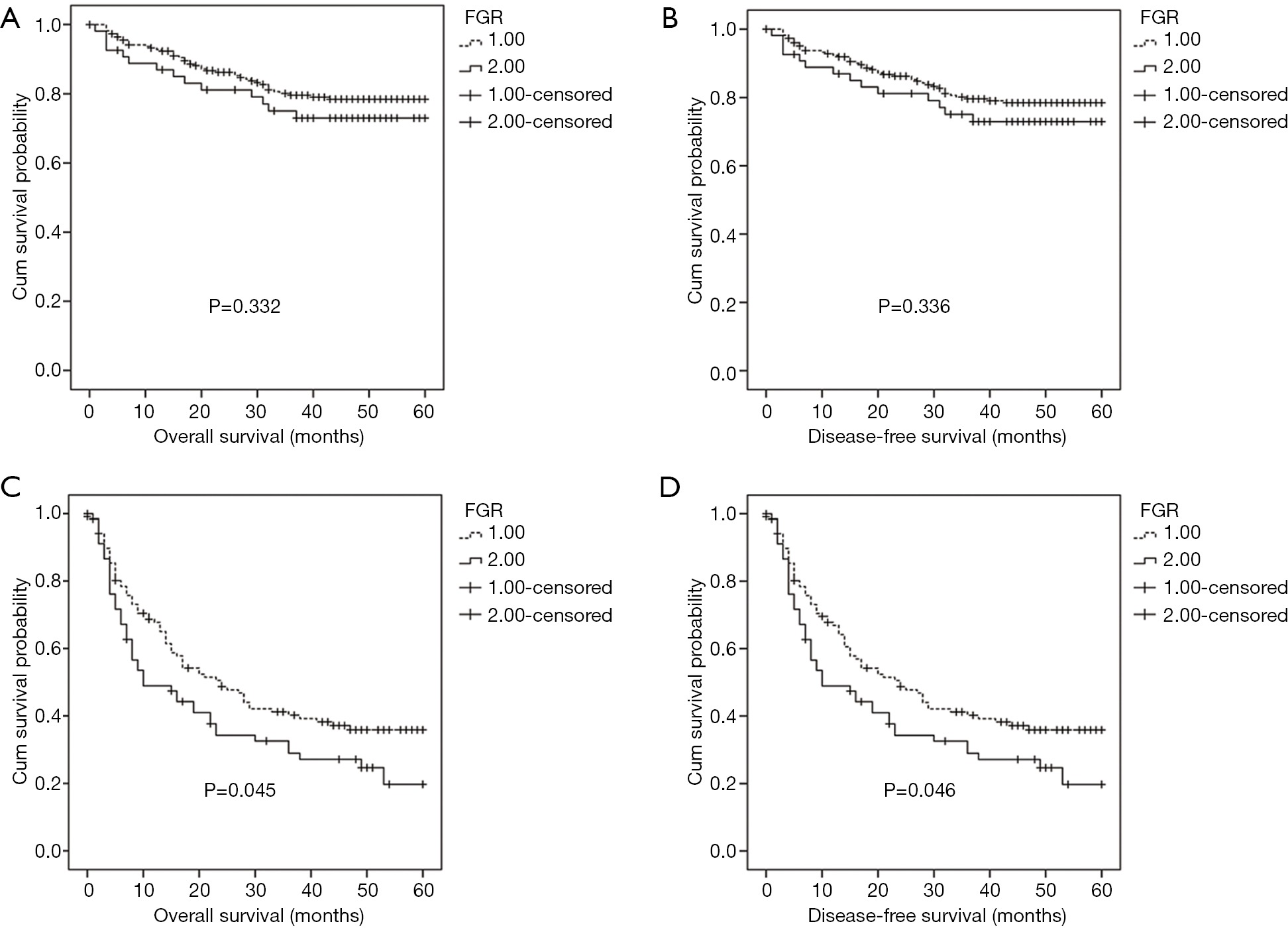 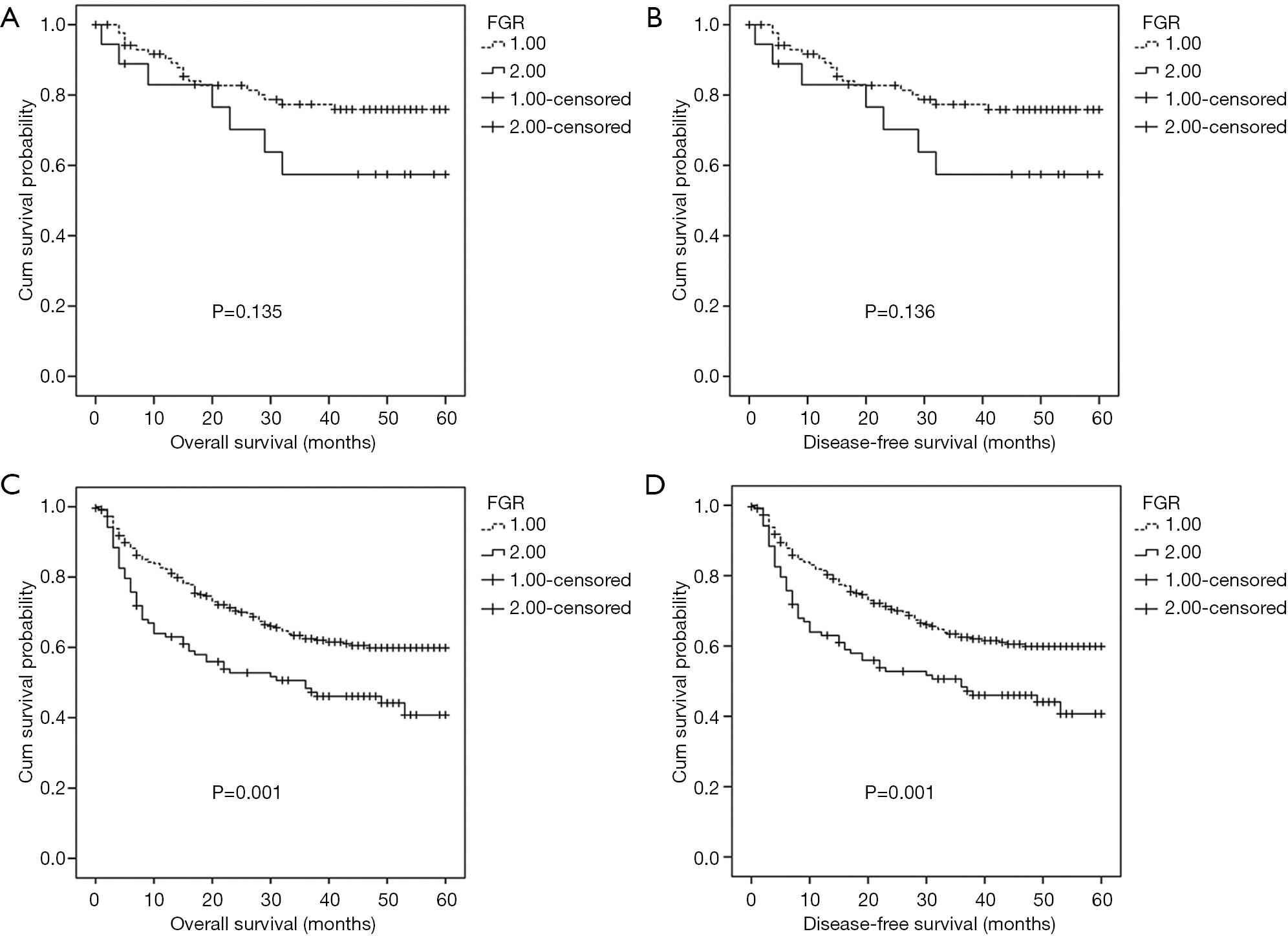 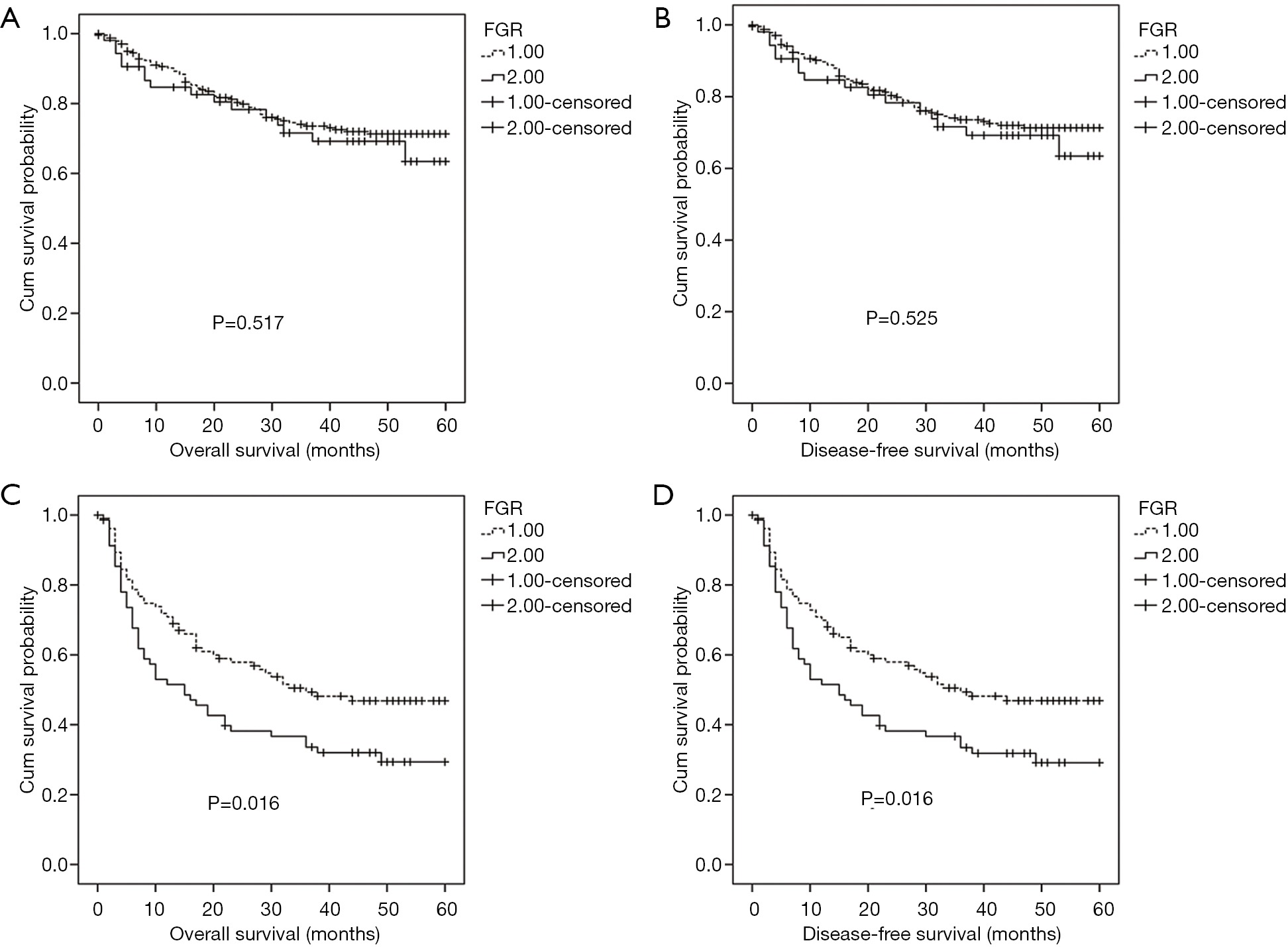 The prognostic value of the combining FGR and ALT/AST

HCC is a heterogeneous solid tumor which is the main detoxifying organ in our body. Despite the improvement in diagnose and treatment strategy, the survival of patients with HCC suffering from hepatic carcinectomy remains poor (10). It is worth studying the risk of mortality and recurrence in order to reduce the rate of relapse and improve the quality of survival for patients with HCC (11,12). FERR is played a key role in iron metabolism. Several studies, including HCC, have confirmed that abnormal ferritin levels associated with tumor occurrence, development and prognosis.

The present data show that FGR level are strongly associated with OS and DFS in HCC patients, and both FERR and globulin are convenient inexpensive indicators that are widely used in clinical laboratories. Previous studies demonstrated that over-expressed FERR has effect on multiple tumors, such as breast cancer, pancreatic cancer, Hodgkin’s lymphoma and HCC. The serum FERR is a protein that stores iron and usually employed to assess iron homeostasis. The secretion source of serum FERR is still unclear, many studies demonstrated that hepatocytes, macrophages and microglia have the ability of FERR secretion (13,14) and the most important is in macrophages (15). The levels of serum ferritin are higher in patients with iron-overload disease and hemochromatosis (16), and the associations between coagulation system and cancer have been frequently studied. Several potential mechanisms have been postulated: (I) in tumor, the cancer cells with high proliferative potential is required to have higher demand for iron, which is essential for energy production and DNA synthesis. FERR is a very efficient iron delivery molecule with high iron storage capacity. (II) Immunosuppression, ferritin may act immunosuppressive effects on lymphocytes and myeloid cells through its modulation of iron availability (17,18). One is that overexpression of iron decreases the numbers and activities of CD4 cells and increases the numbers and activities of suppressor T (CD8) cells resulting in increased CD8:CD4 ratios (19), suppresses the tumoricidal action of macrophages and monocytes (20). The other is high level FERR has been connected with elevated levels of anti-inflammatory cytokines, for example IL-10, whereas linked with the decreased of IL-2 (21). These proinflammatory cytokines are thought to support the cancer cells to evade the immune system in the tumor microenvironment. (III) The influence between FERR and high molecular weight kininogen (HK) could induced normal vessel formation to ensure sufficient vascularization of tumors (22,23). (IV) Oxidative stress. The FERR released of ferric iron (Fe3+), which reduced to ferrous iron (Fe2+), and catalyzed the formation of the hydroxyl radical (*OH) in the presence of superoxide and hydrogen peroxide (H2O2). As a significant oxidizing agent, the hydroxyl radical can induce mutagenesis and DNA strand breaks, activate oncogenes, inhibit tumor suppressor gene, and promote lipid peroxidation (24). GLB was produced by immune organs, which has been used to reflect the immune state (25). It contained a lot of acute reactive proteins such as α1-antitrypsin, α2-macroglobulin, haptoglobin and so on. In the stimulation of inflammation, the level of serum GLB increased rapidly by several inflammatory indicator, it was also correlated with poor prognosis in several malignant tumors (26,27).

Furthermore, the serum FERR level is influenced by acute and chronic inflammation, and is nonspecifically increased in a wide range of inflammatory conditions (28). Globulin is widely recognized as the biomarker of inflammation, so the level of FGR is better response to the impact of cancer on the body, which could weaken the influence of inflammation. Our study shows that FGR are more strongly associated with OS and DFS in HCC than FERR only. However, there were no significant correlations between FGR and AFP, the combination of AFP and FGR provide a new and effective method in HCC diagnosis and prognosis. Also, our results demonstrated that FGR related to AST and ALT, this may be because FERR, AST and ALT escaped from the impaired liver cancer in HCC (5).

In this study, the FGR level is higher in HCC patients than in normal controls. FGR could function as an independent prognostic factor of HCC, also both FERR and globulin are common and convenient monitoring tests in routine preoperative examination. FGR can be employed as a prognostic tool for patients with HCC in combination with AFP.

Funding: This work was supported by grants from the Guangzhou science and technology planning project (201604016070).

Reporting Checklist: The authors have completed the REMARK reporting checklist. Available at http://dx.doi.org/10.21037/tcr-20-966

Conflicts of Interest: All authors have completed the ICMJE uniform disclosure form (available at http://dx.doi.org/10.21037/tcr-20-966). The authors have no conflicts of interest to declare.

Ethical Statement: The authors are accountable for all aspects of the work in ensuring that questions related to the accuracy or integrity of any part of the work are appropriately investigated and resolved. The study was conducted in accordance with the Declaration of Helsinki (as revised in 2013). This study was approved by the Institute Research Ethics Committee of the Sun Yat-Sen University Cancer Center, Guangzhou, China (approval No. 2017-FXY-129). Each patient provided signed, informed consent.