The applications of endoscopy in the field of thoracic surgery have improved continuously since the early 1990s, and in recent years this technique is widely used in clinical practice. Endoscopic resection of oesophageal carcinoma was reported for the first time in 2000 by Luketich (1). Today, endoscopic resection of oesophageal carcinoma is considered as a safe and feasible procedure that reduce intraoperative blood losses, surgical trauma and the incidence of postoperative complications. Moreover, this procedure is associated with an improved patient quality of life during the early postoperative period and long-term survival rates equivalent in comparison with traditional open surgery.

With the improvement of endoscopic equipment and surgical instruments and the optimization of the operative techniques, the scope and depth of endoscopic surgery has been expanded unprecedentedly, which makes the endoscopic McKeown resection procedure for oesophageal carcinoma possible and gradually become the first choice for clinicians and patients. Over time, we observed that the combination of non-artificial pneumothorax and double-lumen endotracheal intubation were associated with a small tissue space, increased bleeding, a longer surgical process and difficulty with exposure of the left laryngeal recurrent nerve chain lymph nodes. Currently, artificial pneumoperitoneum with CO2 is considered safe and effective. Establishment of artificial pneumothorax with CO2 is based on the same principle as that of artificial pneumoperitoneum. During this procedure, CO2 is pumped continuously into the chest cavity at a controlled flow rate, where it enables a stable positive pressure in the pleural cavity that collapses the lung and exposes the operative field.

In December 2017, artificial pneumothorax was commenced applying to thoracoscopic thoracic resection of oesophageal cancer. In this study, we analysed the clinical data of 40 patients who underwent thoracoscopic and laparoscopic oesophageal carcinoma resection via the McKeown procedure with artificial pneumothorax completed by the same operator between December 2017 and August 2019. This study was performed to explore the relevant learning curve associated with this procedure. We present the following article in accordance with the STROBE Reporting Checklist (available at http://dx.doi.org/10.21037/tcr-19-2813).

Data was collected from 40 cases of patients with oesophageal cancer who underwent thoracoscopy and laparoscopy via the McKeown resection protocol under the condition of artificial pneumothorax at our hospital between December 2017 and August 2019. The cases included 30 men and 10 women with an average age of 66.8 years (range, 42–80 years). All patients underwent preoperative gastroscopy and had pathologically confirmed oesophageal cancer or oesophageal high-grade intraepithelial neoplasia. Moreover, the computed tomography findings suggested that all oesophageal cancers and neoplasias in these cases could be excised with lymph node dissection.

All patients involved in this study gave their informed consent before surgery. The patients were divided into four groups of 10 cases each (A, B, C and D) according to the order of operation. The following clinical data was collected from each group: age, sex, T stage, tumour location and pathological type. 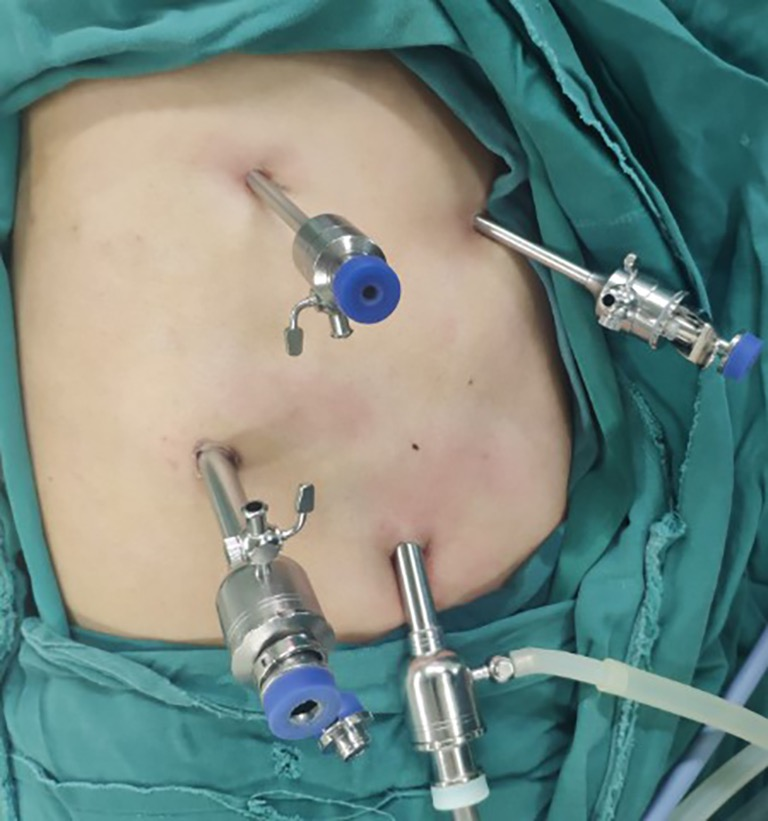 To achieve artificial pneumothorax, the thorax was inflated with CO2 at a low rate (3 L/min) to maintain an intrathoracic pressure of 6–8 mmHg and collapse the affected lung. The artificial pneumothorax was maintained throughout the process of thoracic oesophageal and lymph node dissection. A Hem-o-lok device was used to close and cut the azygos vein via thoracoscopy. After electrocautery incision of the mediastinal pleura, dissection of the free thoracic oesophagus and lymph nodes was performed. Oesophageal dissociation, all dissection procedures and azygos vein dissociation and cutting were all completed via the two main operative holes. Following chest dissociation, the chest was closed and a closed thoracic drainage tube was placed in the endoscopic hole. 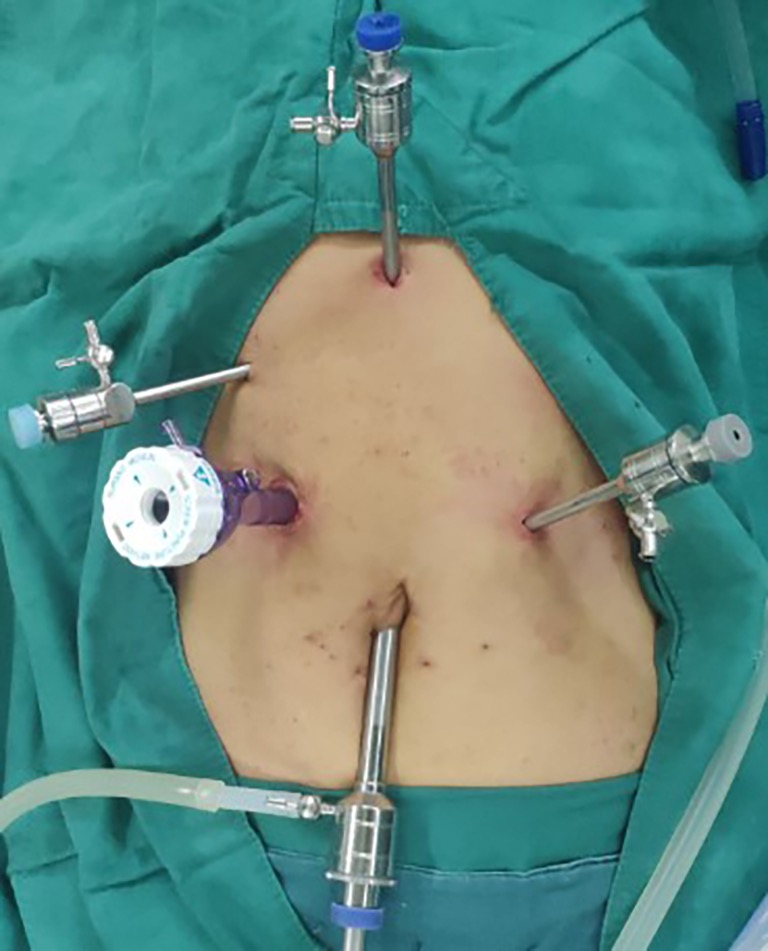 The patient was placed in the supine position with the head elevated and feet placed 30° downward, as well as under double lung ventilation. CO2 and a pneumoperitoneum needle were used to maintain an intraperitoneal pressure of approximately 15 mmHg. A laparoscopic observation hole (1 cm) was made at the lower margin of the umbilicus. And then, three 5-mm incisions were made as auxiliary operation holes for trocar placement. These were located 2-cm below the xiphoid process, 0.5-cm below the costal margin of the right midline clavicle and 3-cm below the costal margin of the left midline of the clavicle. A 12-mm trocar was inserted into the main operating hole at the midpoint between the right auxiliary operating hole and the laparoscopic observation hole.

The right vascular arch of the gastric omentum was preserved using an ultrasound scalpel. The left gastric artery was severed by using a Hem-o-lok closure via the main operating hole. Gastric dissociation up to the diaphragmatic oesophageal hiatus and down to the pylorus was performed to open the diaphragmatic oesophageal hiatus. The abdominal lymph node was dissected. Next, a 5-cm incision was made under the xiphoid process. For tumours located in the upper segment, the stomach and oesophagus were isolated from the cardia. For tumours located in the lower segment, the oesophagus was isolated from the neck. The stomach was removed from the abdominal cavity, and a tubular stomach was formed. 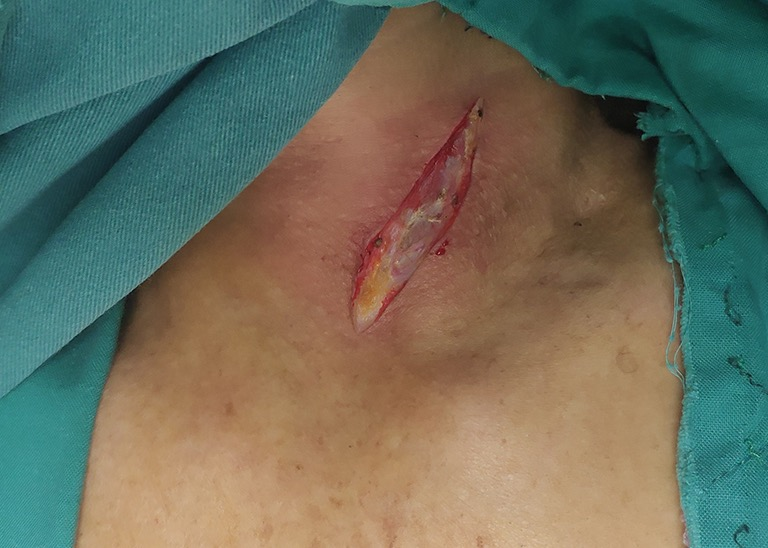 An incision with an approximate length of 4 cm was made through the anterior edge of the left sternocleidomastoid muscle. The thoracic oesophagus and tubular stomach were lifted to the left neck after separating the cervical oesophagus. The oesophagus was cut and anastomosed end-to-end with the tube stomach.

Background of the performing surgeon

The surgeon who performed all 40 operations was experienced in the thoracoscopic and laparoscopic resection of oesophageal carcinoma and mastered the operation mode. During the completion of the initial procedures, the surgeon was guided by a mature and experienced surgeon in the field of thoracoscopic and laparoscopic oesophageal carcinoma resection.

Data obtained in this study were all expressed as mean ± standard error. Results were analyzed by the program SPSS 17.0. Statistical analysis of the experimental data was performed by one-way ANOVA. Differences between two means with P<0.05 was considered statistically significant.

The study was conducted in accordance with the Declaration of Helsinki (as revised in 2013). The study was approved by the Ethics Committee of The First Affiliated Hospital of University of Science and Technology of China (Anhui Provincial Cancer Hospital) (No. 2020-XWK-01), and individual consent for this retrospective analysis was waived.

There was no significant difference in age, gender, tumor location and tumor invasion depth among the groups (P>0.05, Table 1).

Comparison of operative effects between the four groups (Table 2)

The difference of operation time among the four groups was statistically significant (P<0.05, Figure 4). Moreover, comparisons of the first two groups (A, C) with group D revealed statistically significant differences in the number of dissected left recurrent laryngeal nerve lymph nodes (Figure 5). Surgical complications were observed in six cases, including pulmonary infection in five cases and neck anastomotic fistula in one case. There was no significant difference in the number of dissected total lymph nodes, intraoperative blood loss, incidence of postoperative complications and postoperative length of hospital stay between the groups (P>0.05, Table 2). 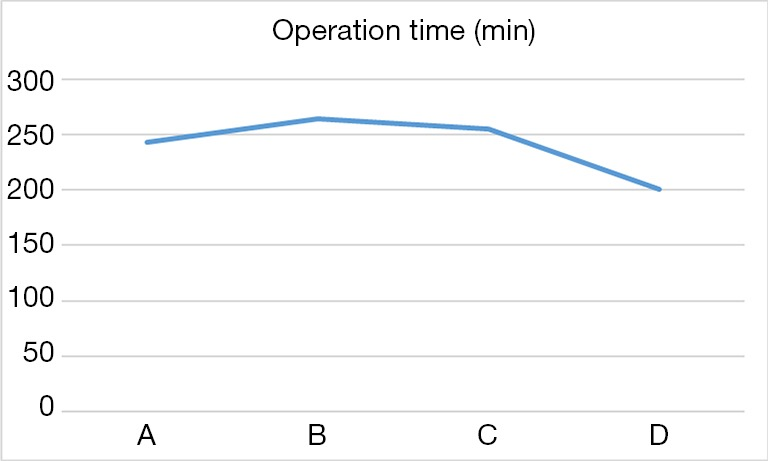 Figure 4 The curve of operation time. 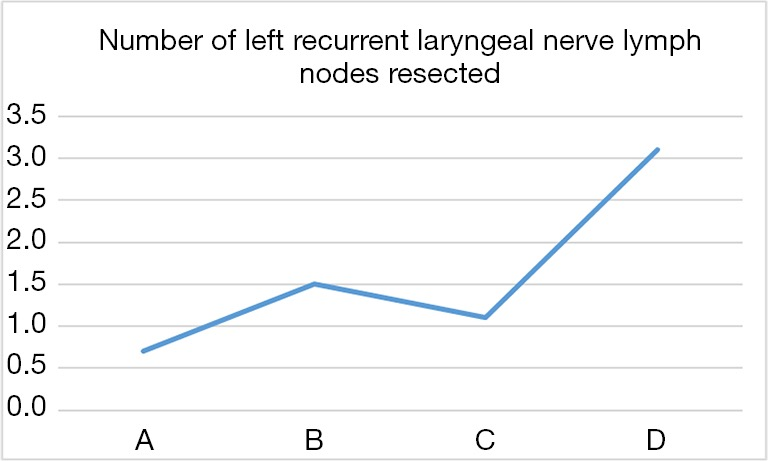 Oesophageal cancer is one of the most common malignancies reported in China. The resection of oesophageal cancer involves a large amount of surgical trauma because the procedure requires thoracotomy, digestive tract reconstruction and extensive lymph node dissection. Consequently, this procedure is associated with high rates of postoperative complications and mortality. A minimally invasive and individualised surgical procedure is needed to reduce the incidence of these negative outcomes associated with traditional open surgery.

In China, middle oesophageal carcinoma is more common than lower or upper oesophageal carcinoma. Therefore, the McKeown technique is widely used in China to enable better lymph node dissection and esophagectomy. In a retrospective analysis of 82 patients who underwent a minimally invasive McKeown resection of oesophageal carcinoma, Zhu et al. (2) concluded that this procedure was feasible and safe. However, thoracoscopic surgery is complicated fundamentally by the need for exposure, which improves safety and efficacy. As noted in the introduction, we observed several challenges associated with endoscopic surgery under the condition of non-artificial pneumothorax and double-lumen endotracheal intubation. With artificial pneumothorax (3), however, we could achieve a more rapid and complete lung collapse and increased adipose tissue space in the mediastinum and around the lymph nodes, these improvements facilitated free exposure while reducing blood losses, the operative time was shortened, the postoperative hospital stay was shortened, and more recurrent laryngeal lymph nodes were dissected.

Regarding lymph node dissection, we observed no statistically significant inter-group differences in the numbers of dissected total lymph nodes. However, the number of dissected lymph nodes increased gradually as the level of surgical experience increased. This pattern also suggests that the combination of thoracoscopy with a laparoscopic radical resection of oesophageal cancer is technically feasible.

Every surgeon aims to improve the surgical effect, reduce complications and reduce the number of cases required to achieve the learning curve as soon as possible. The author recommends directing attention to the following aspects during the early stage of the learning process of thoracolaparoscopy combined with radical resection of oesophageal cancer.

In conclusion, this study has described the experience of a single surgeon to illustrate the learning curve required for artificial pneumothorax during a thoracic laparoscopic McKeown resection of oesophageal cancer. Certainly, the learning curves will differ among surgeons. For example, Tapias (7) reported a minimum learning curve of 35–40 cases to reach a plateau for minimally invasive esophagectomy. Differences among surgeons may be related to many factors, including surgical methods, tumour stages, previous experience with thoracic laparoscopic surgery and learning abilities.

Endoscopic esophageal surgery is the trend of The Times, and the addition of artificial pneumothorax on the basis of endoscopic surgery is conducive to endotracheal intubation, intraoperative management and better oxygenation (8). Of course, it also has certain disadvantages, such as affecting the coagulation function and increasing the risk of tumor metastasis with the spread of CO2 (8,9). There are still many difficulties to be overcome step by step, and we need to continue to work hard.

Reporting Checklist: The authors have completed the STROBE reporting checklist. Available at http://dx.doi.org/10.21037/tcr-19-2813

Conflicts of Interest: Both authors have completed the ICMJE uniform disclosure form (available at http://dx.doi.org/10.21037/tcr-19-2813). The authors have no conflicts of interest to declare.

Ethical Statement: The authors are accountable for all aspects of the work in ensuring that questions related to the accuracy or integrity of any part of the work are appropriately investigated and resolved. The study was conducted in accordance with the Declaration of Helsinki (as revised in 2013). The study was approved by the Ethics Committee of The First Affiliated Hospital of University of Science and Technology of China (Anhui Provincial Cancer Hospital) (No. 2020-XWK-01), and individual consent for this retrospective analysis was waived.