The current two first-line systemic treatment drugs for liver cancer, sorafenib, and lovastinib can extend the patient’s median survival time by about 1 year and accordingly extend the patient’s overall survival time (1,2). However, this prognosis is far from meeting clinical expectations, and there is an urgent need to find more effective treatments and biological targets. Owing to the outstanding effect of tubulin in cell division and cell cycle regulation (3-7), tubulin can be a potential target for the development of new anti-tumor drugs (8,9). Studies have found that tubulin affects the proliferation and migration of liver cancer cell lines between Huh7 and HepG2 (10,11).

The system with sequence similarity 172 and member A (FAM172A or C5ORF21) is a human protein encoded by the FAM172A gene. After the complete human genome was sequenced in 2001, the gene was initially found from the collection of human cDNA libraries (12). Li et al. cloned the FAM172A gene from normal human aortic tissues. They showed that high glucose levels up-regulated the expression of FAM172A protein in human aortic smooth muscle cells in a concentration- and time-dependent manner and speculated that FAM172A as a new Proteins might be involved in the pathogenesis of high glucose-induced vascular injury (13,14). Chunhui Cui et al. found that FAM172A can inhibit the proliferation and invasion ability of colorectal cancer cell line LOVO cells and infer that this gene may be a tumor suppressor for colorectal cancer (15). The results of Qian et al. showed that the FAM172A gene could inhibit the proliferation of colorectal cancer cells and promote apoptosis and differentiation, and the transcription factor STAT1 can bind to the promoter region of the FAM172A gene and up-regulate the expression of this gene (16).

To date, whether FAM172A affects the biological behavior of liver cancer cells by acting on tubulin has not been reported. This work will explore the potential interaction between FAM172A and tubulin, and the biological impact on hepatocellular carcinoma cells. This research can supply targets and a theoretical basis for liver cancer treatment and the development of new drugs. We present the following article in accordance with the MDAR reporting checklist (available at http://dx.doi.org/10.21037/tcr-20-2868).

The study was approved by the Education and Research Committee and the Ethics Committee of The First People’s Hospital of Kashgar. All procedures performed in this study involving human participants were in accordance with the Declaration of Helsinki (as revised in 2013), and written informed consent was obtained from the participants.

The cells were seeded onto the 96-well plates, at a density of 1×105 cells/mL, in 180 µL culture medium each well. After cultured in a 37 °C, 5%CO2 incubator for 24 h, the cells were subjected to different treatments, respectively, for 7 days. Then 20 µL MTT solution (M1020; Solarbio, Wuhan, Hubei, China) was added into each well to incubate the cells at 37 °C for 4 h. The absorbance at 450 nm was added with the Multiskan GO microplate reader (Thermo, USA). Each group had 5 replicate wells, and the cell viabilities were calculated.

The HepG2 cells were lysed using Biosharp lysis (BL504A). The protein concentration was determined using the bicinchoninic acid assay method. Protein samples (40 µg per lane) were loaded onto a 4% gel, resolved SDS-PAGE, and then later transferred onto a PVDF membrane. After blocking with 5% BSA at room temperature for 1 h, the membrane was incubated with anti-FAM172A (1:100; ab121364; abcam) and anti-GAPDH (1:5,000; bs-50549R; BIOSS) primary antibodies at 4 °C for 16 h. Subsequently, the membranes were incubated with the secondary antibody of goat anti-rabbit HRP conjugated IgG (1:10,000; ZB-2301; OriGene Technologies, Inc., MD, USA) at 37 °C for 1 h in the dark. The blot was developed using the ECL method (PE0010; Beijing Solarbio Science & Technology Co., Ltd., China). Protein bands were imaged and analyzed using ImageJ software version 1.52s (National Institutes of Health).

Total RNA was extracted from HepG2 Cell samples using a Total RNA extraction kit (DP431; Tiangen Biotech Co., Ltd., China). The mRNAs of FAM172A and β-tublin were obtained from the GenBank database. The ORFs were designed for the PCR primers. β-tubulin: F: 5’-CCGAGAGGGAAAGTCATAACAAC-3’, R: 5’-CCAGGGT ATCAG GAAAATCAAGAG-3’. FAM172A: F: 5’-TGGCACCCAGCACAATGAA-3’, R: 5’-CTAAGTCATAGTCCGCCTAGAAGCA-3’. The extracted RNA was reverse transcribed into cDNA using the PrimeScript™ RT reagent kit (cat. no. RR037A; Takara Bio, Inc., Shiga, Japan). The reaction conditions were 37 °C for 15 min and 85 °C for 5 sec. RT-qPCR was performed using an AGS PCR machine (AFD4800; Hangzhou AnYu Technologies Co., Ltd., China). The reaction conditions were: 95 °C for 2 min, 95 °C for 5 sec, 60 °C for 10 sec, and 72 for 30. In total, there were 40 cycles. Target gene expression levels were determined with the 2−ΔΔCqmethod. β-actin was used as an endogenous control.

The experiments were performed three times independently. Data are presented as the mean ± SD. SPSS 16.0 software (SPSS, Inc., Chicago, IL, USA) was used for statistical analysis. One-way ANOVA was performed for the comparison of mean values among groups followed by Tukey’s post hoc test. A χ2 test was used to compare the hypermutation ratio. P<0.05 was considered to indicate a statistically significant difference.

Verification of the interaction between FAM172A and β-tubulin

In this work, the STRING 10 database was used to predict the interaction proteins of FAM172A protein. And 10 proteins, including PLAC8L1, GRIK3, and PCYOX1, which are the interaction proteins with FAM172A, were predicted (Figure 1A). In the predicted proteins by STRING, there is no β-tubulin protein, which indicates that FAM172A protein may not interact with the β-tubulin protein.

The co-immunoprecipitation method was repeated 3 times with the corresponding IgG as a control, and all showed no interaction between the two proteins (Figure 1B).

Effect of FAM172A on β-tubulin 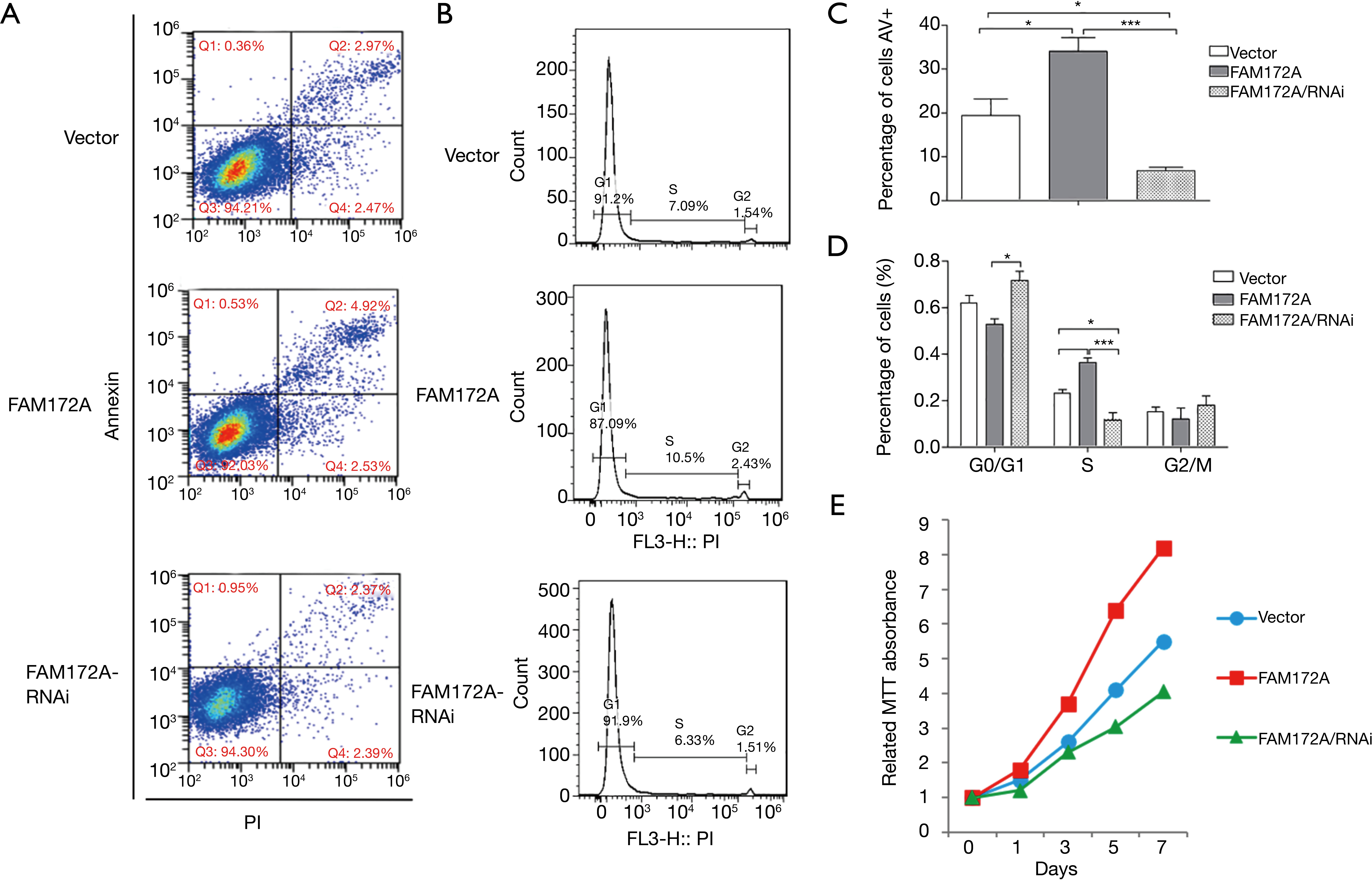 Hepatocellular carcinoma is one of the most common human cancers in the world, and its high mortality rate is due to there are no apparent symptoms until late (17). Various environmental risk factors, including hepatitis B virus or hepatitis C virus infection, heavy drinking, dietary aflatoxin, and exposure to carcinogenic chemicals, have been found as the causes of liver cancer (18,19). However, in the past two decades, the overall survival rate of patients with hepatocellular carcinoma has not improved significantly, and the mechanism of liver cancer development has not been explained in detail (20). At present, molecular targeted therapy for advanced hepatocellular carcinoma shows certain prospects (21).

Tubulin is the current target of anti-tumor drugs: the realization of microtubule function depends on the dynamic polymerization and depolymerization process of tubulin, which provides inhibitors with tubulin to destroy the normal function of microtubules. Favorable entry point (22,23). This study intends to investigate whether FAM172A is a novel tubulin inhibitor that affects the biological function of liver cancer cells. Through bioinformatics and co-immunoprecipitation methods, it is concluded that there is no interaction between FAM172A and β-tubulin. Subsequently, it was detected by immunofluorescence experiments that the change of FAM172A expression would not affect the morphology and distribution of Tubulin in liver cancer cells. Further, qRT-PCR, Western blot and Tubulin polymerization-depolymerization experiments have shown that FAM172A is up-regulated or down-regulated. Meanwhile, β-tubulin mRNA, protein expression, and tubulin polymerization-depolymerization process will not change significantly. The above results prove that there is no targeting relationship between FAM172A and tubulin.

Thanks to Xinjiang Dingju Biotechnology Co., Ltd. for their help in the experiment.

Reporting Checklist: The authors have completed the MDAR reporting checklist. Available at http://dx.doi.org/10.21037/tcr-20-2868

Conflicts of Interest: All authors have completed the ICMJE uniform disclosure form (available at http://dx.doi.org/10.21037/tcr-20-2868). The authors have no conflicts of interest to declare.

Ethical Statement: The authors are accountable for all aspects of the work in ensuring that questions related to the accuracy or integrity of any part of the work are appropriately investigated and resolved. The study was approved by the Education and Research Committee and the Ethics Committee of The First People’s Hospital of Kashgar. All procedures performed in this study involving human participants were in accordance with the Declaration of Helsinki (as revised in 2013), and written informed consent was obtained from the participants.