Androgen depletion therapy (ADT) is performed for the treatment of prostate cancer (PCa). However, most patients with PCa will develop castration-resistant prostate cancer (CRPC) regardless of the treatment with ADT. Reactivation of androgen receptor (AR) and tumor recurrence occur in the presence of low androgen levels in patients with CRPC. Therefore, it is important to suppress the AR signal in CRPC. Based on these considerations, second-generation AR-targeted drugs, including abiraterone, a CYP17A1 inhibitor, and enzalutamide, a potent AR antagonist, were approved for the treatment of metastatic CRPC (mCRPC). Although these drugs have been shown to achieve prolongation of overall survival in patients with mCRPC before or after chemo-therapy (1-4), most patients with mCRPC develop resistance to abiraterone and enzalutamide. Various mechanisms of resistance to enzalutamide, including amplification of AR, overexpression of AR, AR splicing variants (AR-vs, such as AR-v7 and ARv567es), AR point mutations (F876L mutant), activation of AR by alternative pathways, and bypass pathway of AR signal, such as activation of glucocorticoid receptor (GR) (5,6), have been suggested in preclinical models. Some analyses of biomarkers of circulating tumor cells and cell-free tumor DNA in clinical studies have suggested that amplification of AR, expression of AR-v7, and AR mutation could be connected with resistance to enzalutamide (7-9). In terms of analyses in preclinical and clinical studies, aberrant activation of AR seems to play an important role in the resistance to enzalutamide, but the mechanisms through which it causes AR aberrations have not been clarified. Therefore, to develop new therapeutic strategies and facilitate drug discovery, it is important to explore the mechanisms of resistance to enzalutamide.

In the current study, we aimed to elucidate the mechanisms underlying resistance to enzalutamide in mCRPC. For this purpose, we established novel enzalutamide-resistant cells, namely SAS MDV No. 3–14 cells derived from human lymph node carcinoma of the prostate (LNCaP) cells. Then, we characterized the AR status and evaluated the gene expression profile in SAS MDV No. 3–14 cells. We present the following article in accordance with the ARRIVE reporting checklist (available at http://dx.doi.org/10.21037/tcr-20-1463).

Male BALB/c-nu mice (nude mice) for generating enzalutamide-resistant cells, were purchased from Charles River Laboratories (Wilmington, MA, USA). Male C.B-17/Icr-scid/scidJcl mice (SCID mice) for evaluating the effect of enzalutamide on LNCaP or enzalutamide-resistant tumor xenograft models in vivo, were purchased from Clea (Tokyo, Japan). Animals were housed under constant conditions of temperature (20–26 °C) with 12-hour lighting time (from 8:00 am to 8:00 pm) and provided sterilized food and water. All animal studies were reviewed and approved by the Institutional Animal Care and Use Committees at Taiho Pharmaceutical Co., Ltd. (No. AE-2014-397 and AE-2016-179) and carried out according to the guidelines for animal experiments of Taiho Pharmaceutical Co., Ltd.

The PCa LNCaP cells were kindly provided by the Institute of Microbial Chemistry (Tokyo, Japan). Cells were maintained in RPMI1640 medium containing 10% FBS. For tumor implantation, LNCaP cells were treated with RPMI1640 medium containing 10% FBS and 5 ng/mL interleukin-6 (IL-6), as it has been reported that IL-6 increases the tumorigenic potential in vivo, and the xenograft mice model showed resistance to surgical castration (10). The SAS MDV No. 3–14 enzalutamide-resistant cells were maintained in RPMI1640 (phenol red free) medium with 5% FBS and 10 µM enzalutamide. Accordingly, VCaP, and 22Rv1 cells were obtained from the American Type Culture Collection and the European Collection of Authenticated Cell Cultures, respectively. Normal prostate stromal cells (PrSC) were purchased from LONZA (Tokyo, Japan).

Enzalutamide-resistant cells were established in accordance with a previous study (11). Accordingly, LNCaP cells were subcutaneously inoculated in intact nude mice. Mice bearing tumors were surgically castrated under isoflurane anesthesia and administered 25 mg/kg enzalutamide for over 3 months. When the tumor volume reached about 2,000 mm3, tumors were excised, and viable tissue was transplanted to pre-castrated male nude mice. Second-generation transplanted xenografts were used for generating acquired enzalutamide-resistant cells. A relapsed tumor under continuous administration of enzalutamide was harvested by needle biopsy and cultured in vitro in the presence of 10 µM enzalutamide over the next 4 months, and thus SAS MDV No. 3–14 cells were established. In general, enzalutamide is administered at a dose of 10 mg/kg for evaluating its anti-tumor effect in preclinical studies (12,13). To generate enzalutamide resistant LNCaP xenografts, we adopted the dose of 25 mg/kg enzalutamide in the current study.

Cells were treated with indicated compounds at various concentrations in the presence or absence of DHT for 3 or 5 days. Cell proliferation was assessed using the CellTiter-Glo Luminescent Cell Viability Assay (Promega, Madison, WI, USA).

Evaluation of the effect of enzalutamide on tumor growth in LNCaP or SAS MDV No. 3–14 xenograft models

Mice were surgically castrated under isoflurane anesthesia. LNCaP or SAS MDV No. 3–14 cells were subcutaneously inoculated in pre-castrated SCID mice. The mice were randomized into two groups and administered with vehicle or enzalutamide. Vehicle or 10 mg/kg of enzalutamide were orally administered for 21 (LNCaP) or 28 (SAS MDV No. 3–14) continuous days. Tumor volume was measured twice weekly.

Both LNCaP and SAS MDV No. 3–14 cells were treated with vehicle (DMSO) or DHT (1 nM) for 1 day. Then, total RNA was extracted from cultured cells and purified. Microarray analysis was performed using the Human Genome U133 Plus 2.0 Array (Thermo Fisher Scientific). Data were normalized using the robust multichip average. Differentially expressed genes in SAS MDV No. 3–14 cells treated with DMSO compared with those in LNCaP cells were extracted in a first step by filtering the expression ratio between LNCaP and SAS MDV No. 3–14 cells (absolute 2log ratio >2 difference). Next, DHT-regulated genes were excluded from the first-step-filtered genes. Obtained transcripts were used for Ingenuity Pathway Analysis® (IPA, QIAGEN), to explore the upstream genes of AR, already reported to exhibit a direct or indirect association with AR. 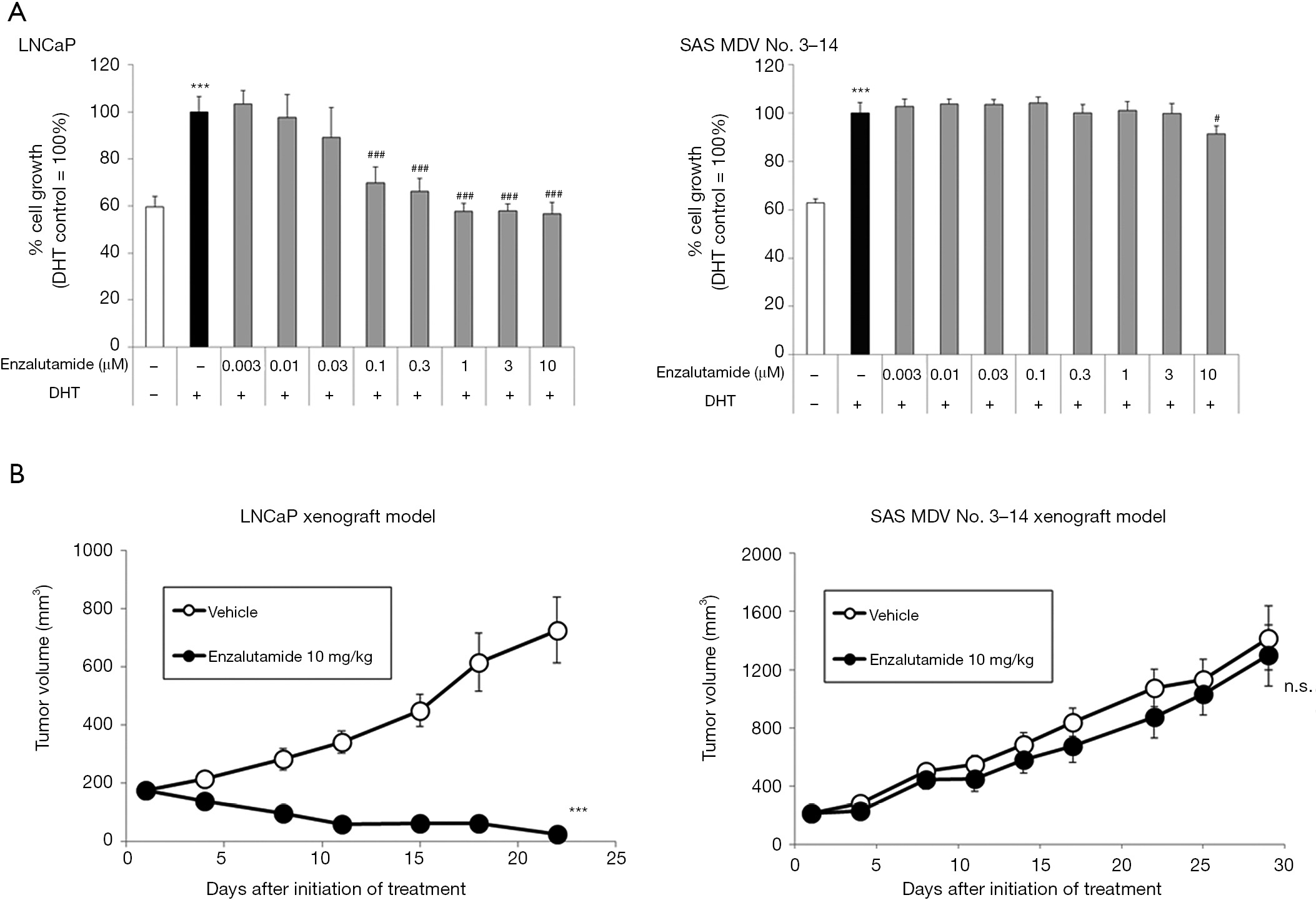 Characterization of AR status and AR transactivation in SAS MDV No. 3–14 cells 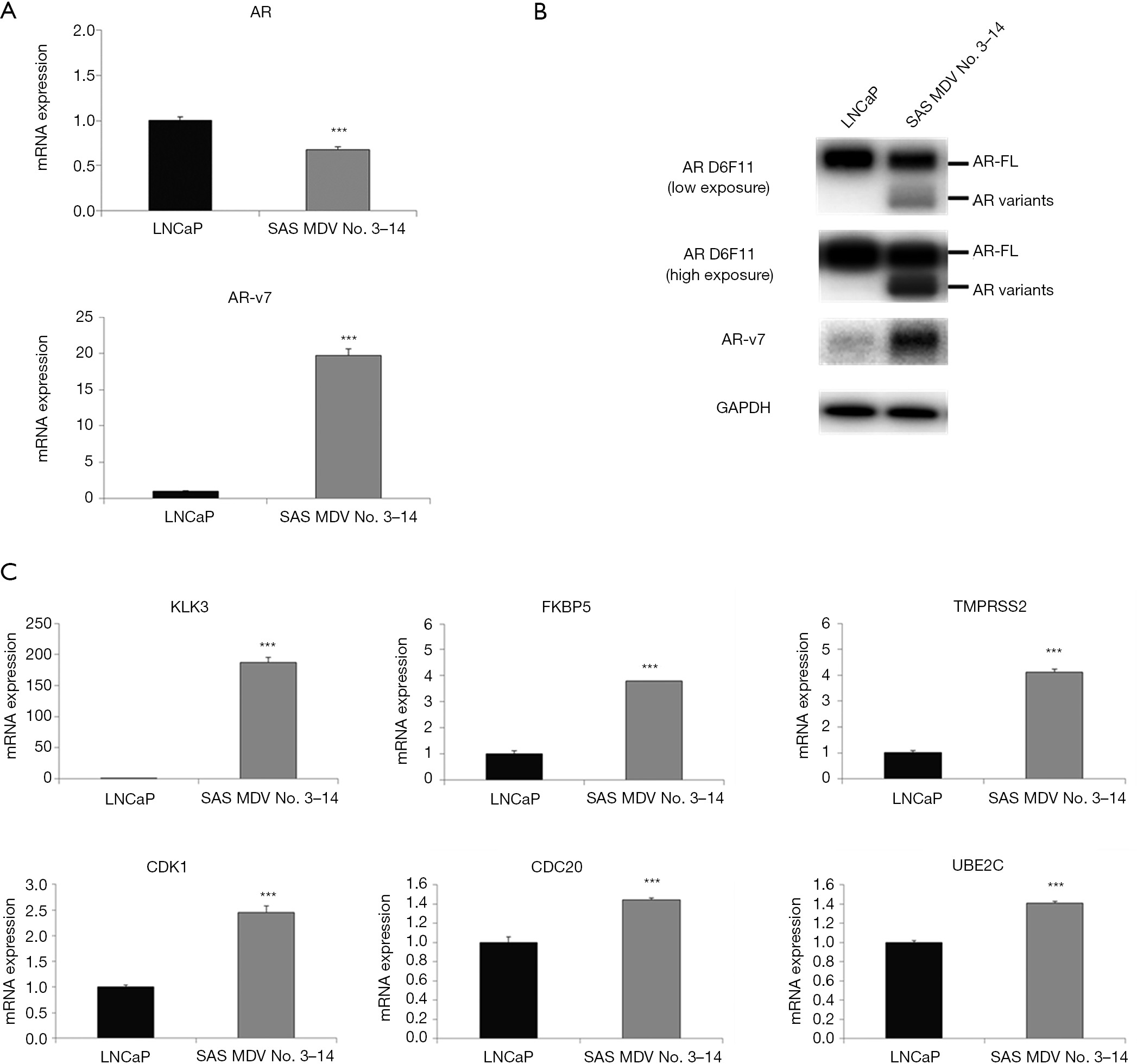 The function of AR-FL and AR-v7 in cell growth and AR transactivation in SAS MDV No. 3–14 cells 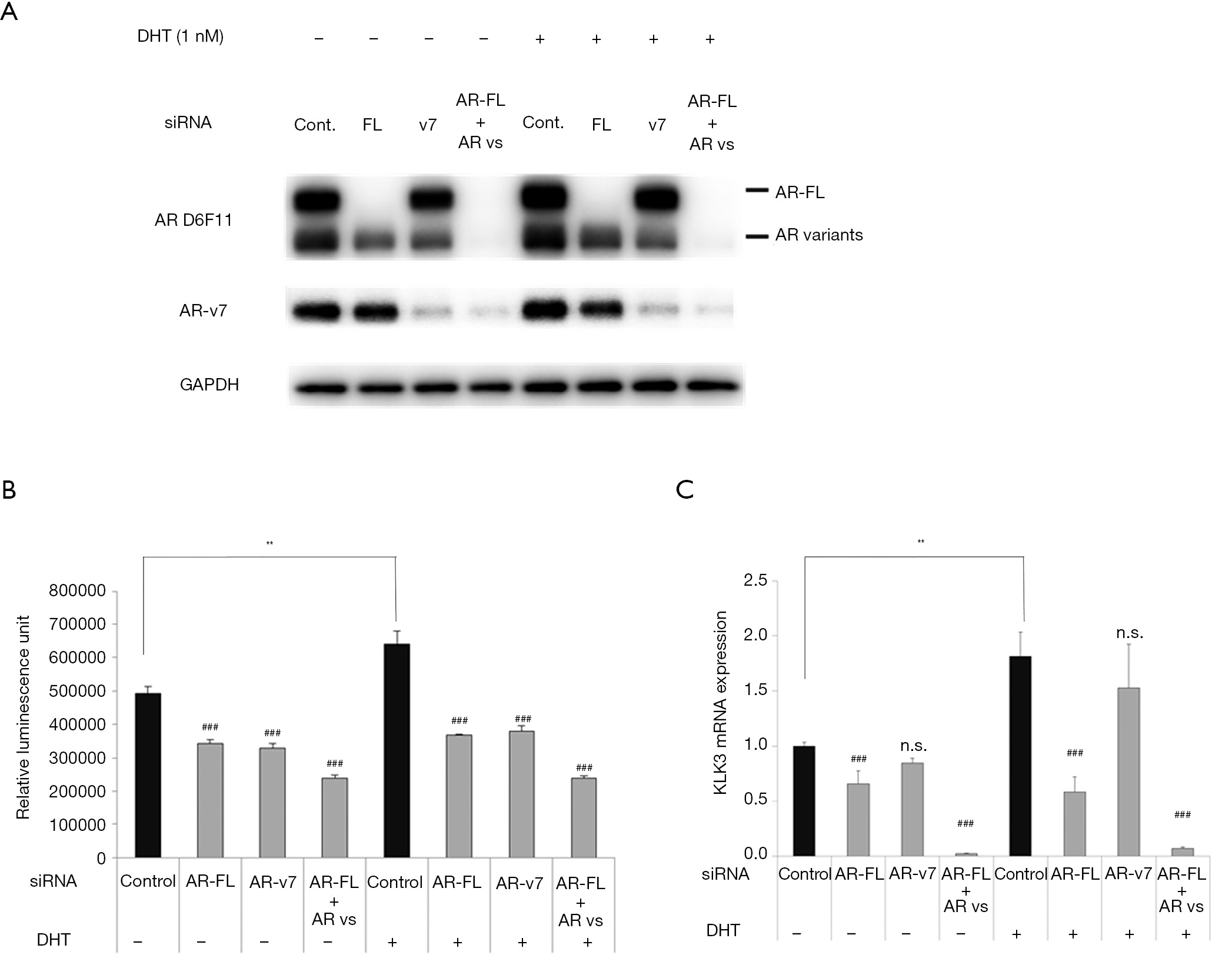 Figure 3 Function of AR-FL and AR-v7 in the proliferation and transcriptional activity of AR in SAS MDV No. 3–14 cells. (A) SAS MDV No. 3–14 cells were transfected with siRNA against AR-FL (targeting AR exon 7), AR-v7 (targeting AR cryptic exon 3), or AR-FL + AR-vs (targeting AR exon 1), in the absence or presence of DHT (1 nM). (A) Three days after transfection with siRNA, whole-cell lysates were harvested and subjected to immunoblotting analysis. An AR antibody recognizing the AR n-terminal domain (AR D6F11), an AR-v7 specific antibody, and a GAPDH antibody were used as primary antibodies. (B) Five days after transfection with siRNA, cell proliferation was evaluated using the CellTiter-Glo assay. Data represent mean ± SD (N=3). (C) The mRNA expression of KLK3 was analyzed by qRT-PCR analysis. The expression of the KLK3 gene was normalized to the corresponding expression of GAPDH, and relative mRNA expression in the vehicle group without DHT treatment was set as 1. Data represent mean ± SD (N=3). **, P<0.01. ###, P<0.001, n.s., not significant compared to each control; AR, androgen receptor; DHT, dihydrotestosterone; GAPDH, glyceraldehyde 3-phosphate dehydrogenase.

Microarray analysis for a comprehensive evaluation of altered gene expression in SAS MDV No. 3–14 compared with LNCaP cells 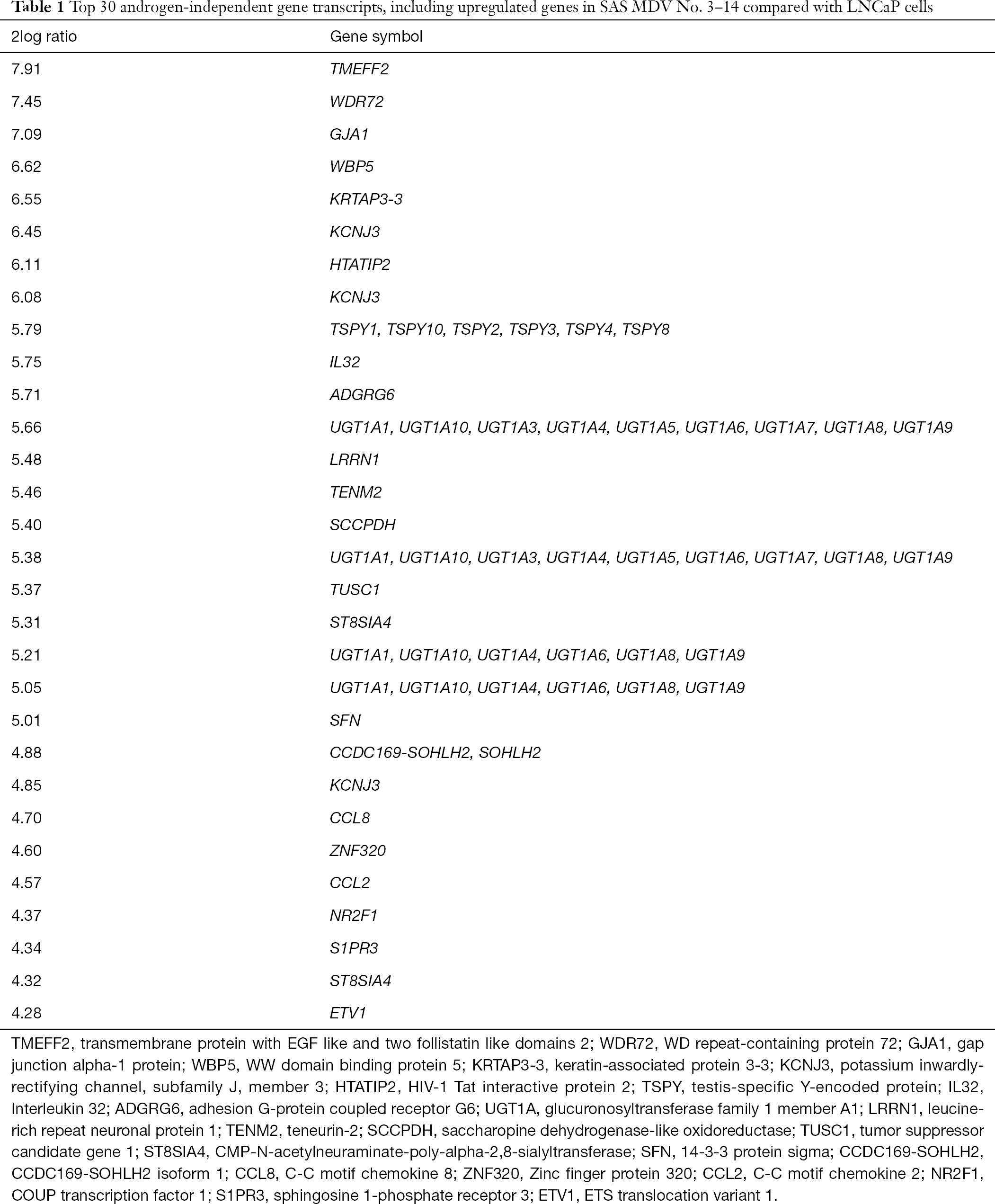 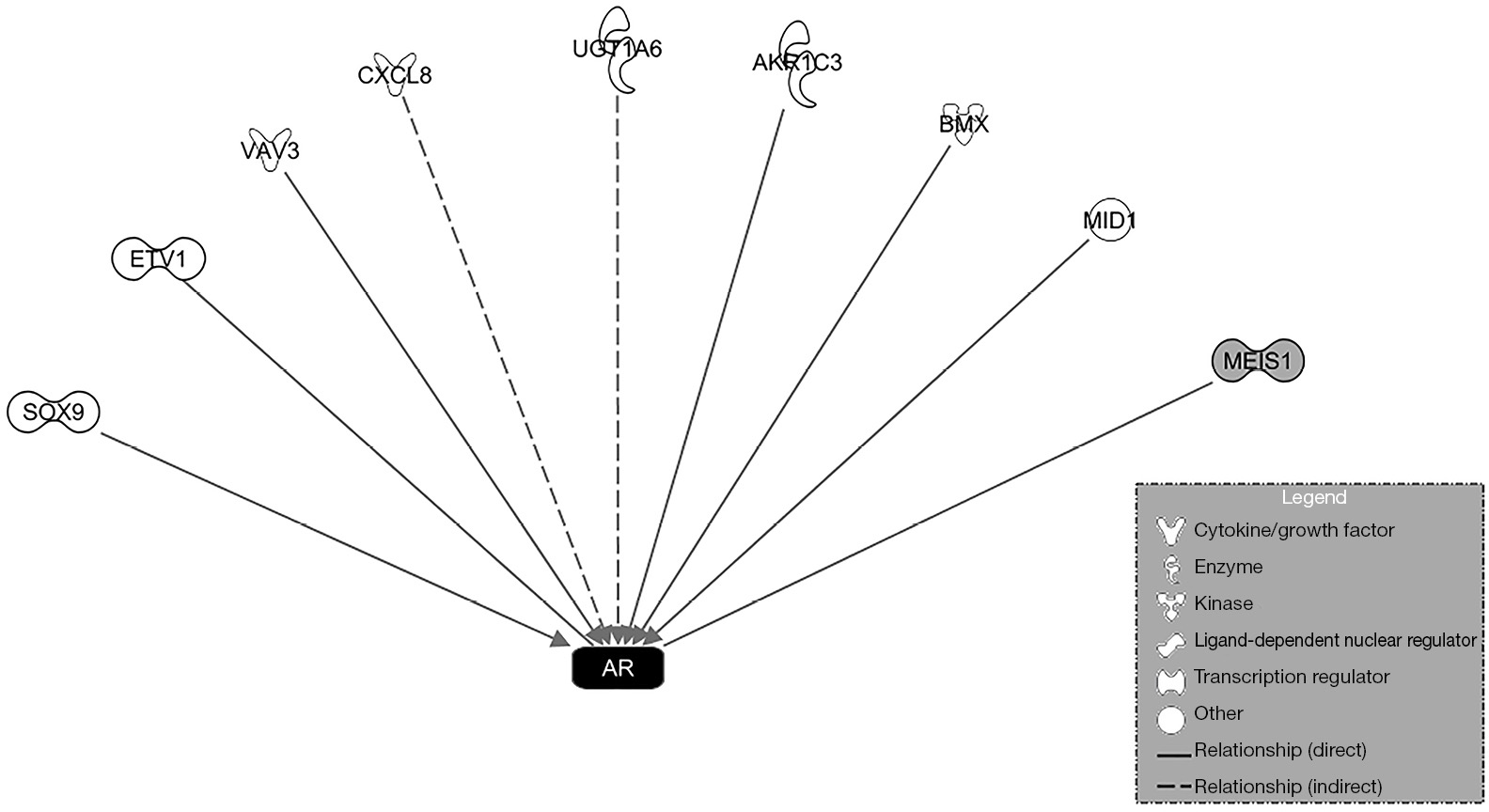 Figure 4 Ingenuity pathway analysis (IPA) of genes upstream of AR previously reported showing a direct or indirect association with AR. IPA was performed on the set of the 294 extracted transcripts described in the Results. White blocks are upregulated genes, whereas a gray block represents a downregulated gene. AR, androgen receptor.

Evaluation of the function of TSPY in SAS MDV No. 3–14 cells 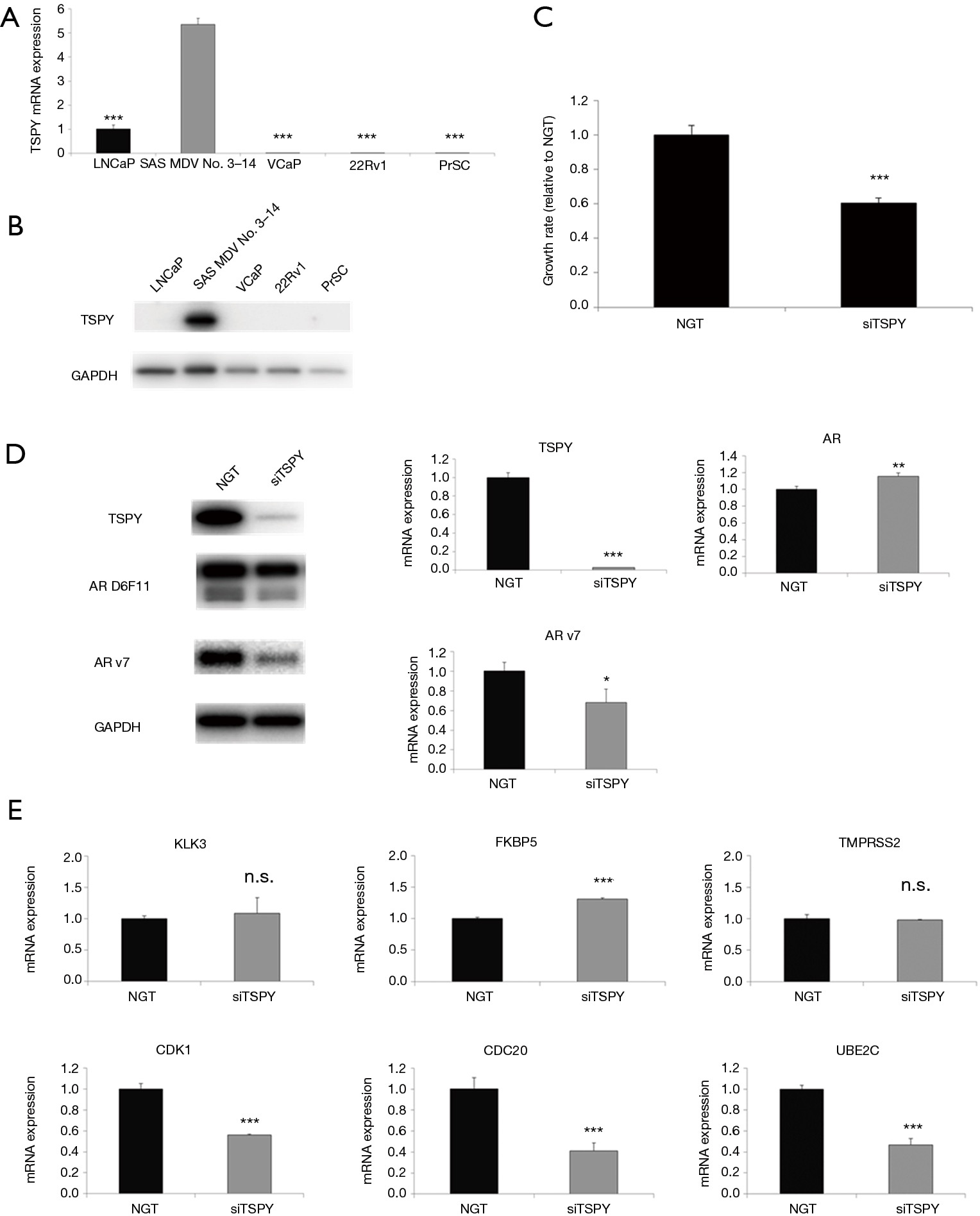 Resistance to enzalutamide constitutes a clinical issue in the management and treatment of patients with CRPC. Several enzalutamide-resistant models that harbor AR aberrations, including amplification of AR, overexpression of AR, AR splicing variants, such as AR-v7, and AR mutations in the AR ligand-binding domain (LBD) (F876L) have been reported (21-23). However, the mechanisms of resistance have not been fully elucidated. To solve this problem, we established a new enzalutamide-resistant cell line, named SAS MDV No. 3–14 cells, and performed a gene expression profiling of these cells.

Reporting Checklist: The authors present the study in accordance with the ARRIVE reporting checklist. Available at http://dx.doi.org/10.21037/tcr-20-1463

Conflicts of Interest: All authors have completed the ICMJE uniform disclosure form. (Available at http://dx.doi.org/10.21037/tcr-20-1463). The authors have no conflicts of interest to declare.

Ethical Statement: The authors are accountable for all aspects of the work in ensuring that questions related to the accuracy or integrity of any part of the work are appropriately investigated and resolved. All animal studies were reviewed and approved by the Institutional Animal Care and Use Committees at Taiho Pharmaceutical Co., Ltd. (No. AE-2014-397 and AE-2016-179) and carried out according to the guidelines for animal experiments of Taiho Pharmaceutical Co., Ltd.