Esophageal cancer is a common malignant tumor worldwide (1), and surgery is the most important treatment for early and middle stage esophageal cancer. Although the surgical techniques have made remarkable progress in recent years (2-4), esophagectomy remains a high-risk operation with many postoperative complications (5,6).

Respiratory failure directly extends the length of ICU stay and total hospital stay, increases hospitalization costs, influences the recovery process and even leads to death of patients. But so far, there have been few reports on the prognostic factors of postoperative respiratory failure in esophageal cancer.

Therefore, the purpose of this study was to record the recovery process of patients with respiratory failure and tracheal intubation after esophagectomies, and to analyze the impacts of different factors on patients’ recovery duration. This may help to provide some meaningful reference for the treatment of patients.

We present the following article in accordance with the STROBE reporting checklist (available at http://dx.doi.org/10.21037/tcr-20-1326a).

The study was conducted in accordance with the Declaration of Helsinki (as revised in 2013). The study was approved by Ethics Committee of Sun Yat-sen University Cancer Center of B2019-028-01 and informed consent was taken from all the patients.

After a period of mechanical ventilation, these patients were successfully extubated and transferred out of the ICU. In order to make more accurate evaluation about the impact of different factors on the rehabilitation of respiratory failure, we excluded patients who died in hospital due to various reasons like massive hemorrhage, cardiac arrest, massive cerebral infarction, etc.

So finally, a total of 130 patients were included in the study. Relevant clinical and pathological data, including lung function test outcomes were obtained from medical records of each patient. As we know that the inflammatory response usually reaches its peak within one week, we collected the peak values of white blood cell (WBC) count, serum creatinine, C-reactive protein (CRP) and lactate during the first week after mechanical ventilation. Postoperative information such as endotracheal intubation duration, length of ICU stay and total hospital stay and treatment outcome was also collected.

Continuous variables were summarized by mean and SD. Frequencies and percentages were used to express categorical variables. The Spearman’s rank correlation test and Mann-Whitney U test were performed to identify the influential factors for the duration of tracheal intubation. A probability of less than 0.05 was considered statistically significant. Statistical analysis was performed by using SPSS software (version 21) for Windows (SPSS® Inc., Chicago, IL, USA).

In total, 2,360 esophageal cancer patients underwent esophagectomies at our institute from January 2012 to December 2017. Among them, 130 patients were eligible to enter the study. As shown in Figure 1, the duration of mechanical ventilation for patients in this study ranged from 3 to 74 days. The average duration was 10.1 days. Seventy-one (54.6%) patients recovered within one week after tracheal intubation. Another 35 cases (26.9%) recovered successfully in the second week. It can be seen that most patients (81.5%) recovered in the first two weeks of mechanical ventilation.

As shown in Table 1, in this study, the age of patients ranged from 45 to 82 years. The average age was 62.8 years old. And the number of patients over 70 years old was 30 (23.1%). Statistical analysis indicated that age could significantly affect the duration of mechanical ventilation (P=0.004). 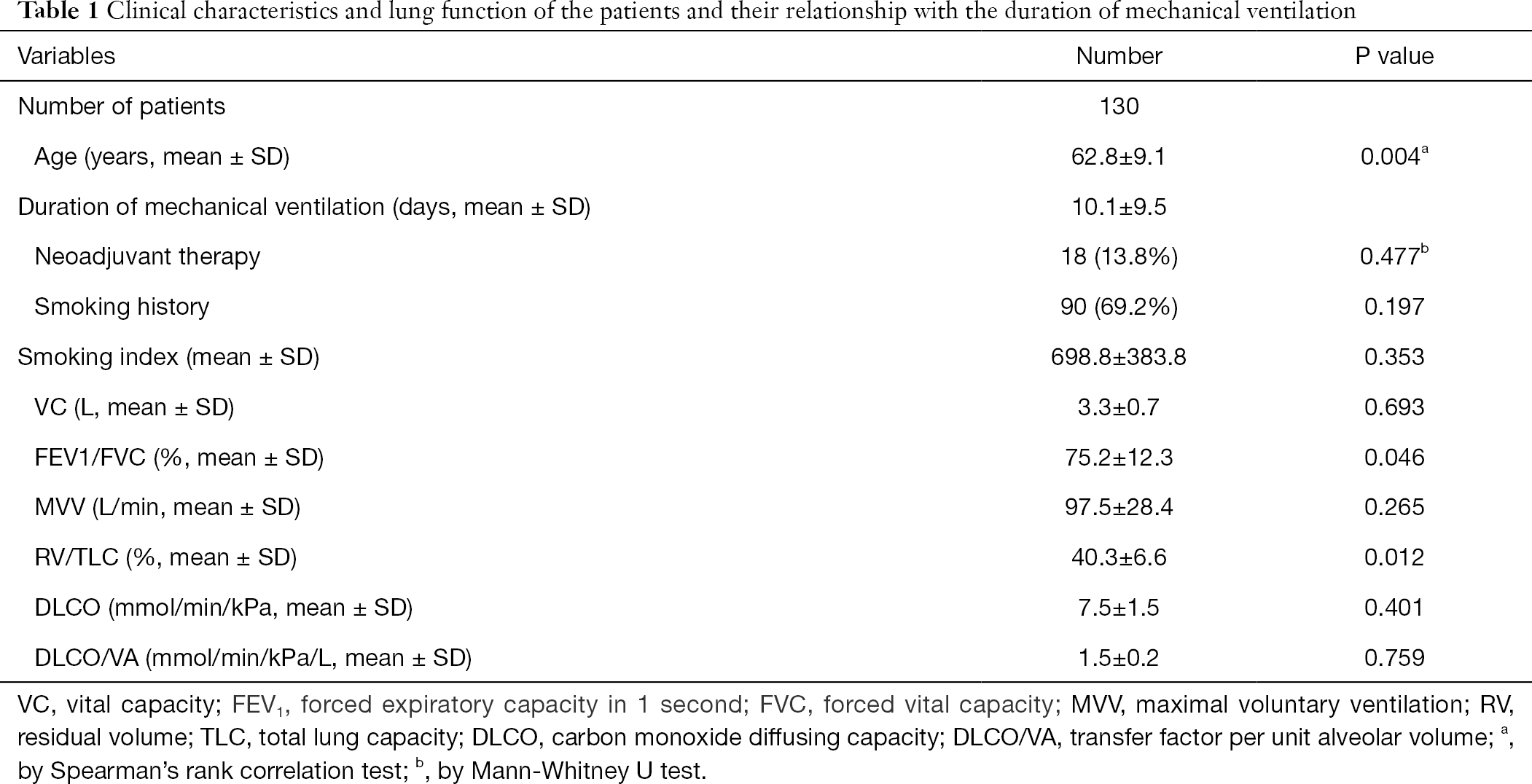 A total of 90 patients had a history of smoking, and statistical results suggested that smoking history as well as smoking index had no significant correlation with the patient’s mechanical ventilation time (P=0.197, P=0.353, respectively).

We also studied some biochemical indicators to discover their effects on the recovery of respiratory failure, as shown in Table 2. The patients’ WBC count in this study ranged from 5.8 to 36.7 (×109/L). A total of 120 (92.3%) patients had higher values than normal, the average value was 15.5 (×109/L). Data analysis revealed no correlation between WBC count and mechanical ventilation duration of the patients (P=0.125). 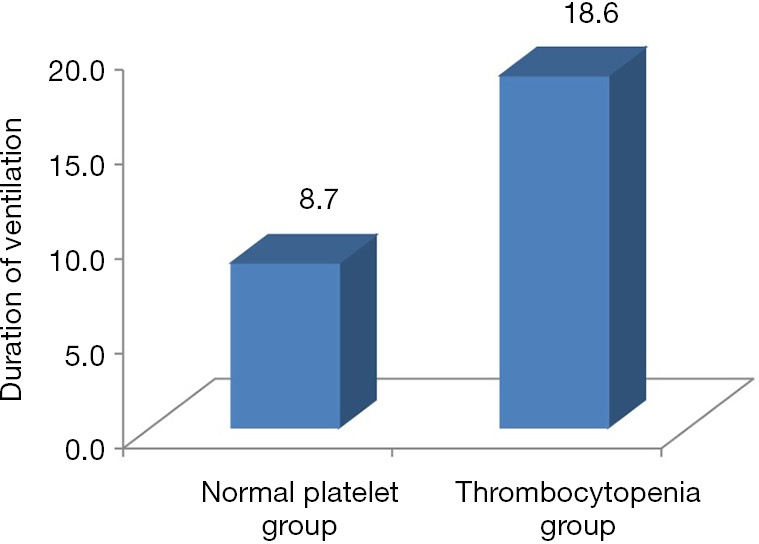 The serum creatinine values of patients in this study ranged from 39.0 to 298.2 µmol/L, the average value was 85.9 µmol/L. In this study, 17 (13.1%) patients had higher creatinine levels than normal (18–110 µmol/L). The result of statistical analysis suggested that the patients’ creatinine level had an influence on the duration of mechanical ventilation (P<0.001).

The lactate value in this study ranged from 0.6 to 15.0 (mmol/L), among them, 23 patients (17.7%) had higher lactate levels than normal. Data analysis showed that the level of lactate could significantly affect the duration of mechanical ventilation in patients (P=0.002).

The scatter plots of the relationship between the factors studied above and the duration of mechanical ventilation were shown in Figures 3-7. 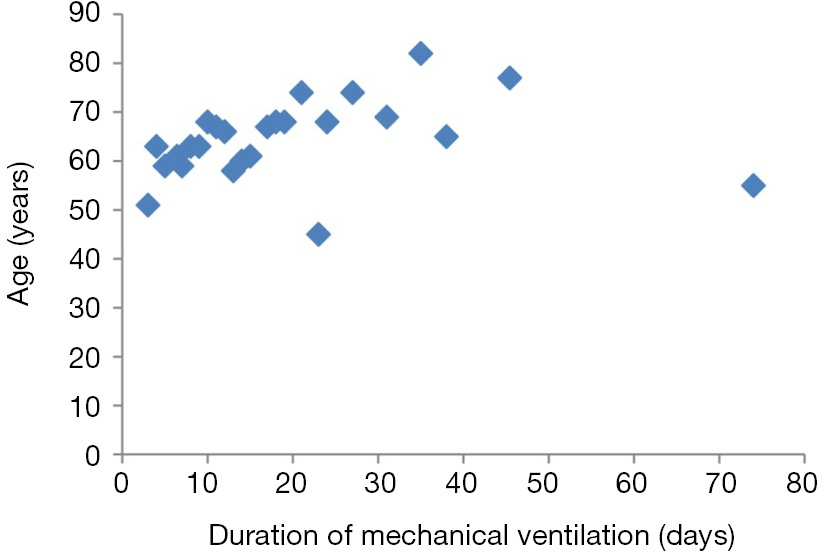 Figure 3 The relationship between age and duration of mechanical ventilation. 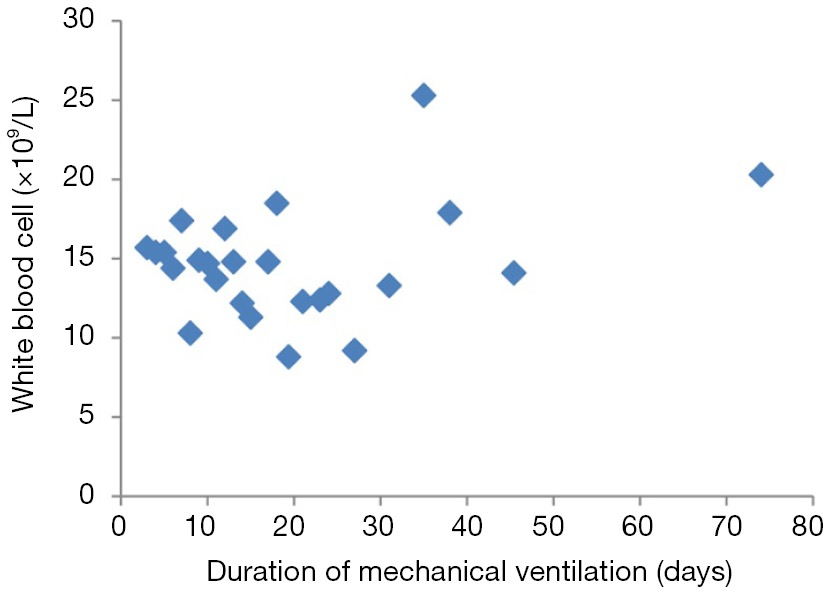 Figure 4 The relationship between white blood cell count and duration of mechanical ventilation. 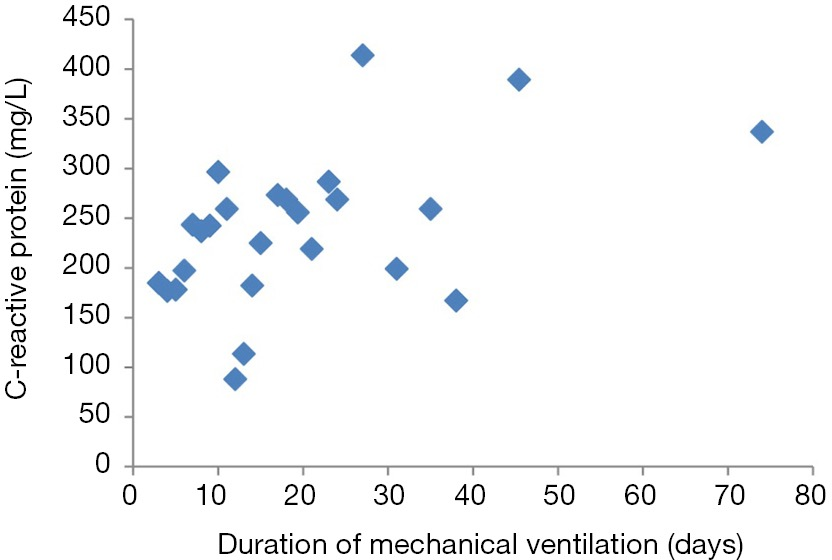 Figure 5 The relationship between serum C-reactive protein level and duration of mechanical ventilation. 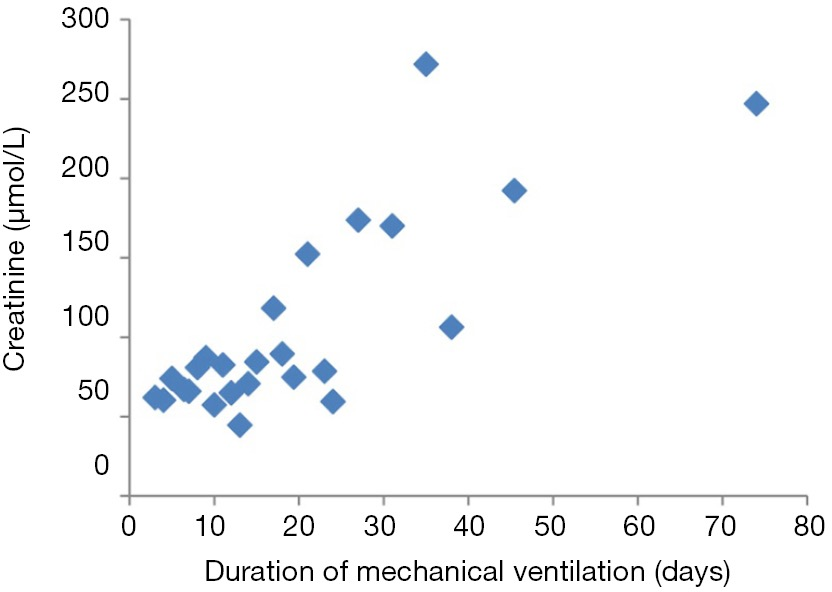 Figure 6 The relationship between serum creatinine level and duration of mechanical ventilation. 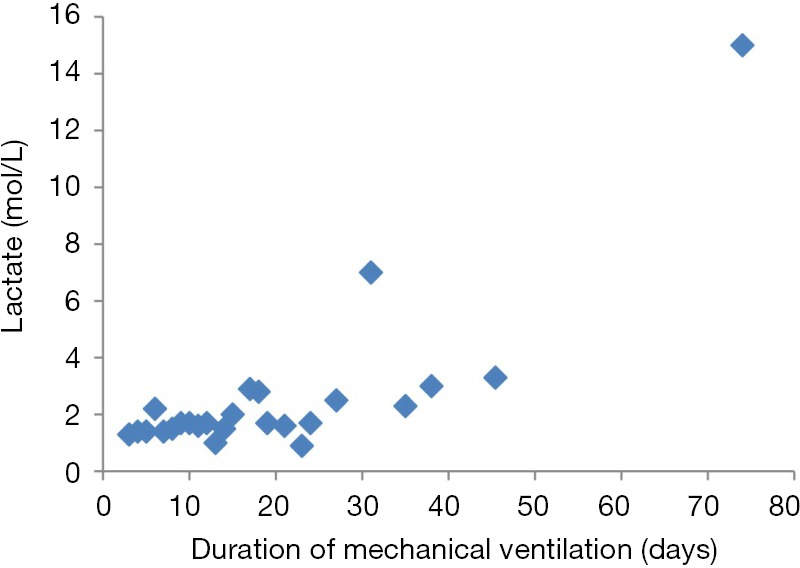 Figure 7 The relationship between serum lactate level and duration of mechanical ventilation.

Considering that most patients in this study recovered within one to two weeks. As we know, respiratory failure after esophageal cancer surgery is often a kind of ARDS caused by surgical trauma and inflammatory stimulation. Since the pathogenic causes are relatively simple, the prognosis may be comparable. So perhaps this type of patient could serve as a model for studying ARDS caused by traumatic inflammation, helping us to compare the effects of different factors on the recovery progress of respiratory failure.

Among the lung function indicators, we studied, FEV1/FVC ratio and RV/TLC ratio were found to be risk factors to the duration of mechanical ventilation. We know that when patients’ airway resistance increase, such as in patients with chronic obstructive pulmonary disease or acute attack of bronchial asthma, these two indicators will be abnormal. And when a patient has a decrease in lung elasticity, such as in emphysema, the RV/TLC ratio increases. Therefore, when the patient had some of the above abnormalities, the mechanical ventilation duration would be prolonged.

This study analyzed the influences of several factors on the recovery of respiratory failure. Owing to the decline of the physical function and the low organ reserve function of the elderly, it is often difficult for them to recover or slow to recover after illness. This study confirmed that advanced age prolonged the duration of mechanical ventilation. This reminds us that we should be more cautious in the treatment of elderly patients after esophageal cancer surgery.

We know that there are many factors that can cause the increase of WBC, including infection, trauma, inflammation, stress response, bleeding, etc. Therefore, the elevation of WBC is usually not clinically specific. This study also suggested that there is no statistical correlation between the values of WBC and the duration of mechanical ventilation. So, the level of WBC is less valuable in assessing the prognosis in this kind of patients.

CRP is a rapidly rising protein in plasma when the body is exposed to infection or tissue damage. As a highly sensitive indicator of acute response, plasma CRP concentration increases rapidly and significantly in trauma, infection, inflammation, surgery and acute myocardial infarction. Traditionally, CRP is considered as a non-specific inflammatory marker. Nevertheless, the results of this study found that there was a certain correlation between CRP level and the patient's mechanical ventilation duration. In patients with higher CRP values, mechanical ventilation would take longer.

Acute kidney injury (AKI) is a common critical disease, which is characterized by a rise in serum creatinine and/or a decrease in urine volume in a short period of time. The incidence of AKI in critically ill patients is as high as 35% (12). Prospective multicenter studies have shown that severe sepsis is the leading cause of AKI (13,14). In this study, a total of 17 patients (13.1%) developed creatinine elevation. Statistical analysis showed that creatinine level was correlated with the duration of mechanical ventilation. Therefore, creatinine level can be used as an evaluation factor for the prognosis of respiratory failure after esophageal cancer surgery.

Lactate is the product of anaerobic metabolism of cells. Arterial blood lactate elevation is an early sensitive indicator of deficiency of tissue perfusion and oxygen supply (15). It is suggested that when the level of blood lactate exceeds 4 mmol/L in sepsis patients, the mortality rate increases greatly (16). Blood lactate level may be one of the clinical indicators to evaluate the severity and prognosis of sepsis patients (17). This study found that blood lactate level was related to the recovery of patients with respiratory failure. The higher the lactate value, the longer the patient’s mechanical ventilation would be. This suggested that lactate was also one of the indicators to estimate the prognosis of respiratory failure after esophagectomy.

The present study was conducted on a relatively larger number of patients compared to some other studies; however, the main limitation of this study is that it utilized data from a single-center and is retrospective in design. Further studies with a prospective, multicenter design will better clarify the predictive factors for respiratory failure after esophagectomy.

Reporting Checklist: The authors have completed the STROBE reporting checklist. Available at http://dx.doi.org/10.21037/tcr-20-1326a

Conflicts of Interest: All authors have completed the ICMJE uniform disclosure form (available at http://dx.doi.org/10.21037/tcr-20-1326a). The authors have no conflicts of interest to declare.

Ethical Statement: The authors are accountable for all aspects of the work in ensuring that questions related to the accuracy or integrity of any part of the work are appropriately investigated and resolved. The study was conducted in accordance with the Declaration of Helsinki (as revised in 2013). The study was approved by Ethics Committee of Sun Yat-sen University Cancer Center of B2019-028-01 and informed consent was taken from all the patients.