Lung cancer is one of the most common causes of cancer-related deaths worldwide. Non-small cell lung cancer (NSCLC) accounts for 80% to 85% of all lung cancer cases, and lung adenocarcinoma (ADC) and lung squamous cell carcinoma (SCC) are the main histopathologic subtypes of NSCLC (1,2). ADC and SCC are very similar in clinical manifestations, but have significant differences in pathogenesis, treatment and prognosis (3). For example, activating mutations in the epidermal growth factor receptor (EGFR) and in the anaplastic lymphoma kinase (ALK) fusion typically occur in lung ADC but not lung squamous cell cancer, rendering drugs targeting these genes ineffective against lung squamous cell cancer (4). Further study of these differences in subtype characteristics will contribute to a deeper understanding and identification of lung cancers and molecular targeting strategies for treatment.

Forkhead box M1 (FOXM1) is one of the important members of the forkhead box (FOX) transcription factor family, whose members are characterized by a DNA-binding domain (DBD), also referred to as a forkhead or winged helix domain, consisting of greater than 100 amino acids (5). FOXM1 is a proliferation-related transcription factor whose expression is increased in proliferating cells, but decreased or absent in cells undergoing terminal differentiation (6). FOXM1 is also highly expressed in embryos, whereas in adults, it is only expressed in self-renewing tissues, such as thymus and testis, and a few proliferating cells (7). FOXM1 is a crucial regulator of the cell cycle (8), and mainly promotes G1-S and G2-M transitions during cell cycle progression, and ensures mitotic spindle integrity by positively regulating transcription of its downstream cell cycle-specific genes (9,10). FOXM1 is also involved in various of biological processes, such as cell proliferation, apoptosis, differentiation, angiogenesis, and DNA damage repair (11). Normal expression and activity maintain the balance of transcriptional programs, ensuring appropriate growth and maturation during the development of embryos and fetuses, as well as maintaining proper homeostasis and normal repair of adult tissues. On the contrary, abnormal expression and activity of FOXM1 may cause the biological processes in which it is involved to be disordered, leading to tumor formation, progression, invasion and metastasis (12). Previous studies have found that FOXM1 expression is up-regulated in lung cancer and leads to poor prognosis. However, the expression and prognostic value for different pathological types of lung cancer have not been further studied (13,14). Moreover, the mechanisms of FOXM1 mRNA expression dysregulation are far from being fully understood. Therefore, we investigate FOXM1 mRNA expression and its clinical value for patients with ADC and SCC.

FOXM1 mRNA levels were divided into two groups (high expression and low expression) by setting the median expression as the cutoff. CNAs were defined in each gene by sample-specific thresholds as follows: deep deletion (−2), shallow deletion (−1), neutral/diploid (0), gain (+1) and amplification (+2) by using the Genomic Identification of Significant Targets in Cancer (GISTIC) algorithm. Patients were divided into 3 groups: a FOXM1 copy number amplification group (positive values), copy number loss group (negative values) and normal group (zero). For grouping DNA methylation, we calculated the 75th percentile of β-values from all analyzed patients and used it as the cut-off value. Subsequently, individuals with a β-value higher than the cut-off value were considered methylated, otherwise individuals were considered unmethylated. 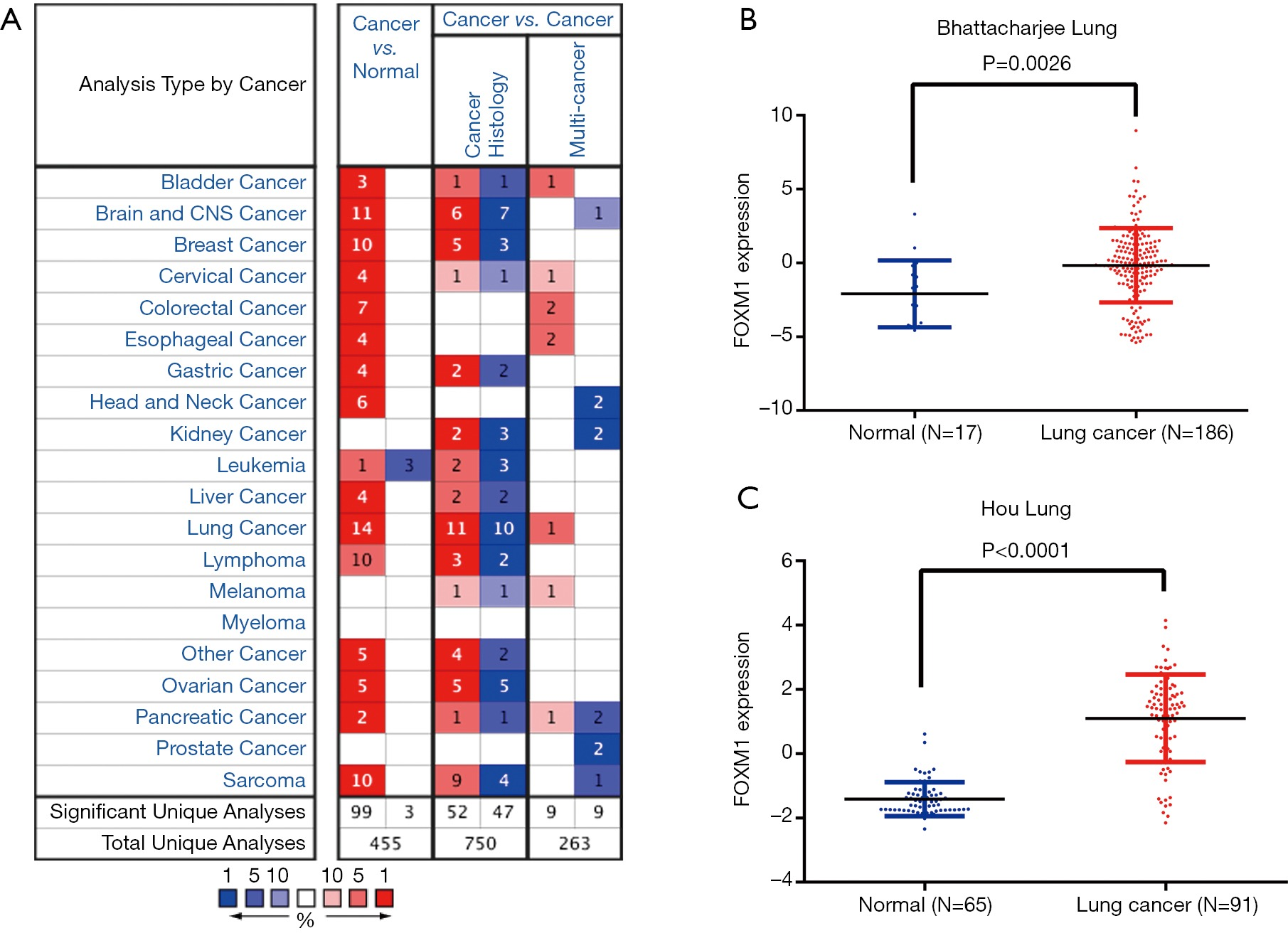 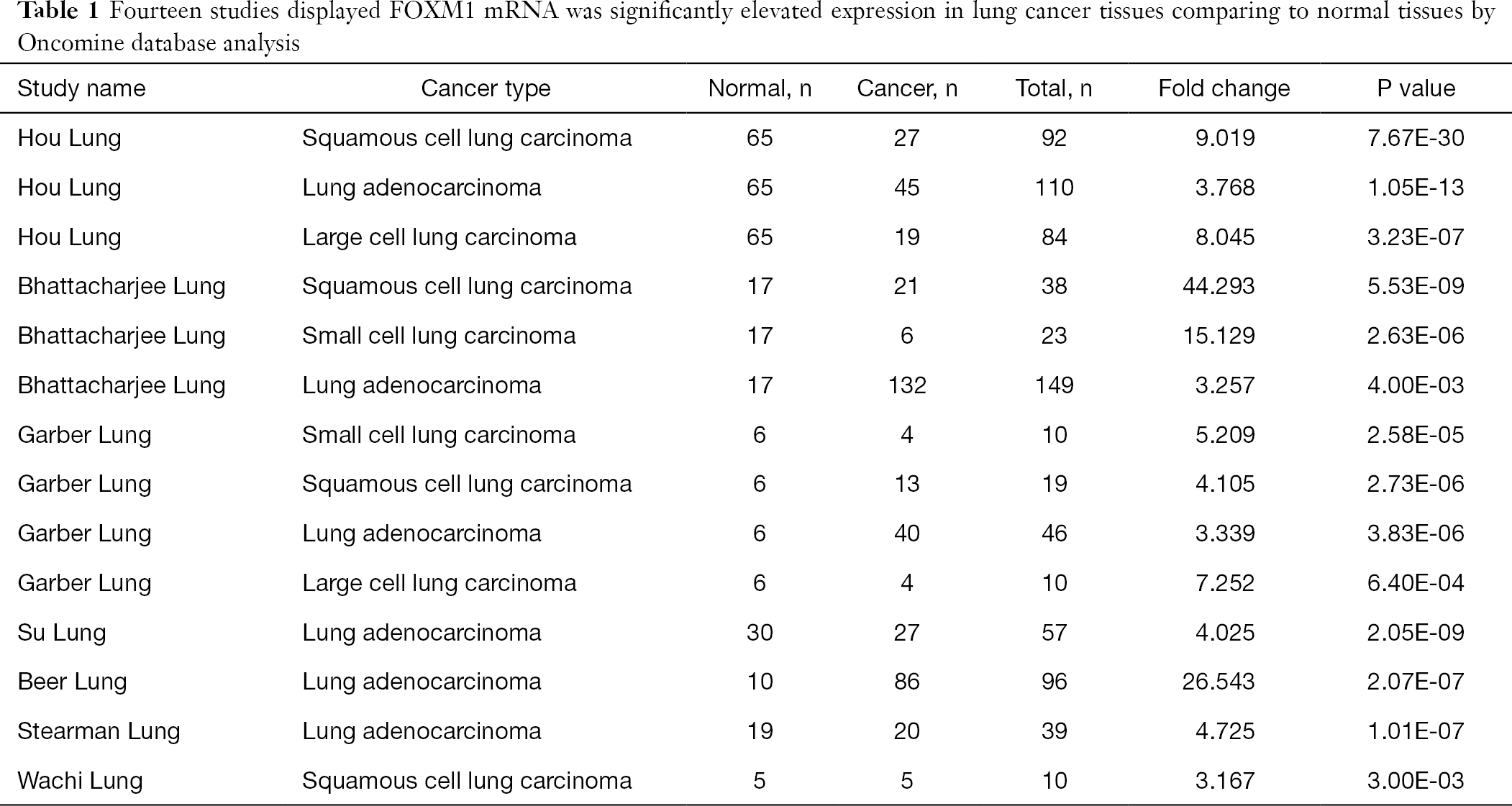 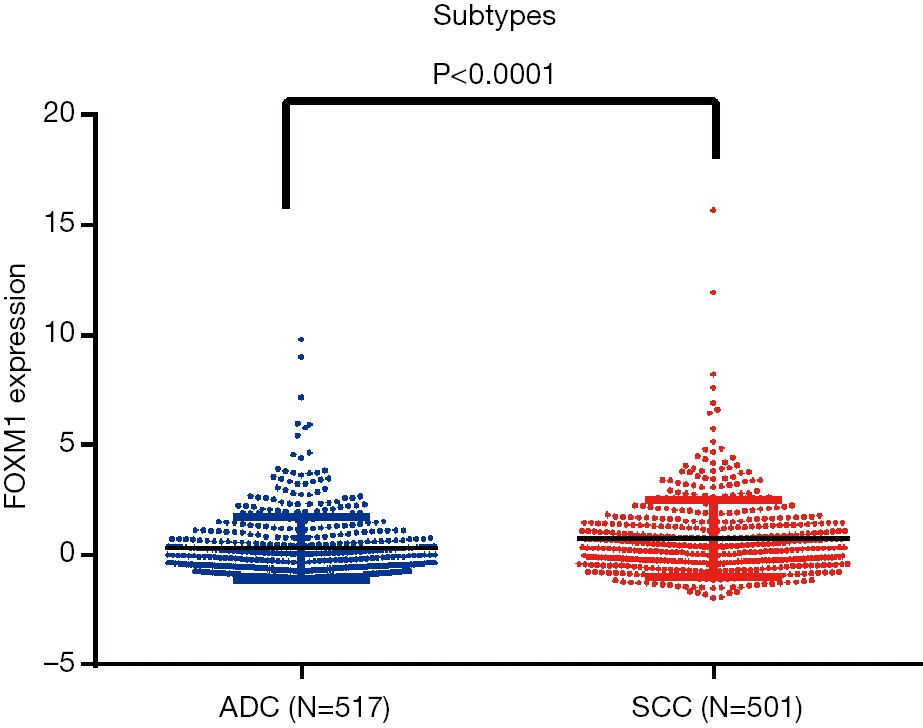 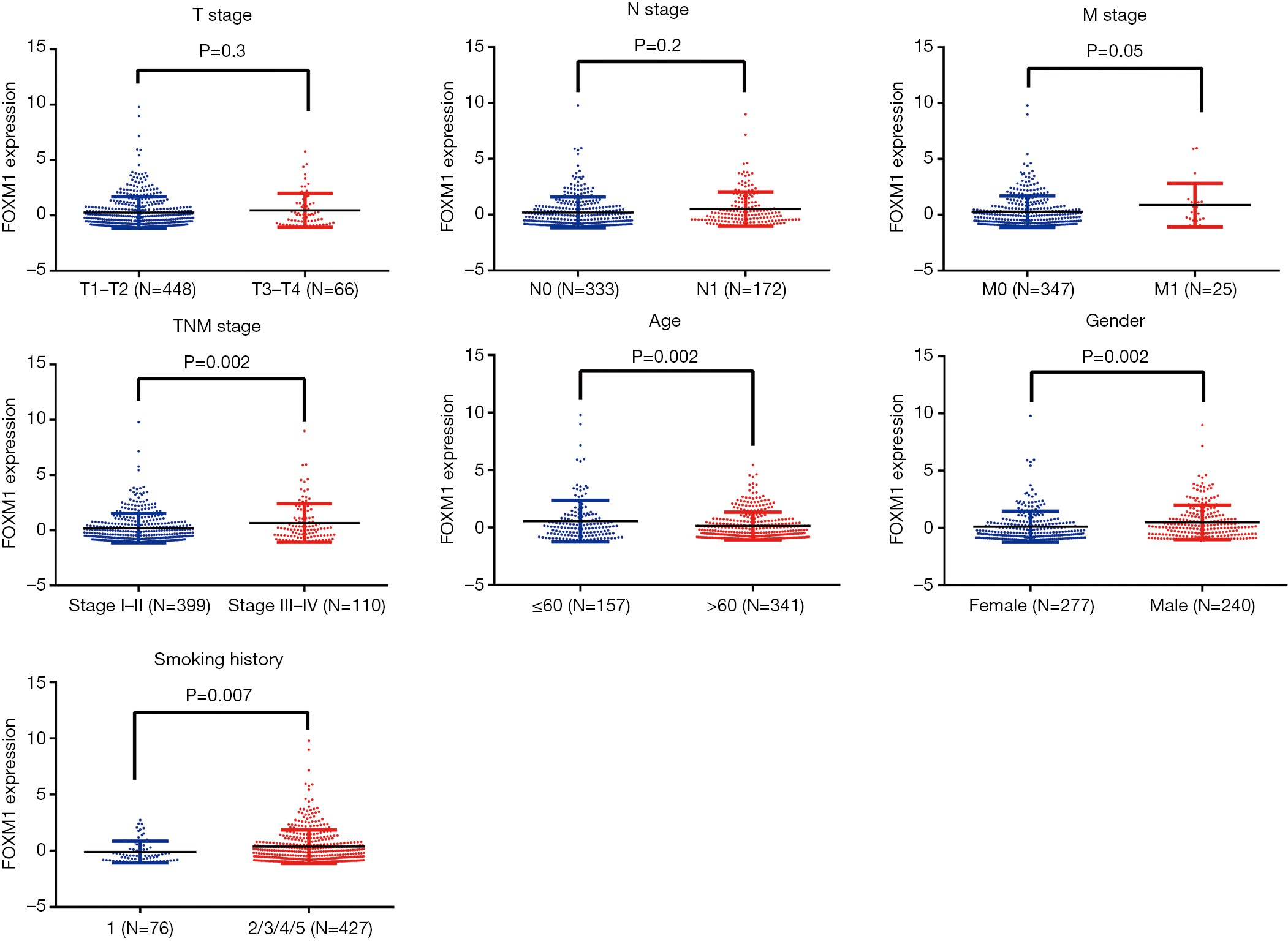 Figure 3 Correlation between FOXM1 mRNA expression and clinicopathological variables in ADC. FOXM1 mRNA expression was related to N stage, TNM stage, age at diagnosis, gender and smoking history, but not with the T stage or M stage in ADC patients. T, the anatomical size of the primary tumors; N, the extent of lymph node involvement. ADC, lung adenocarcinoma. 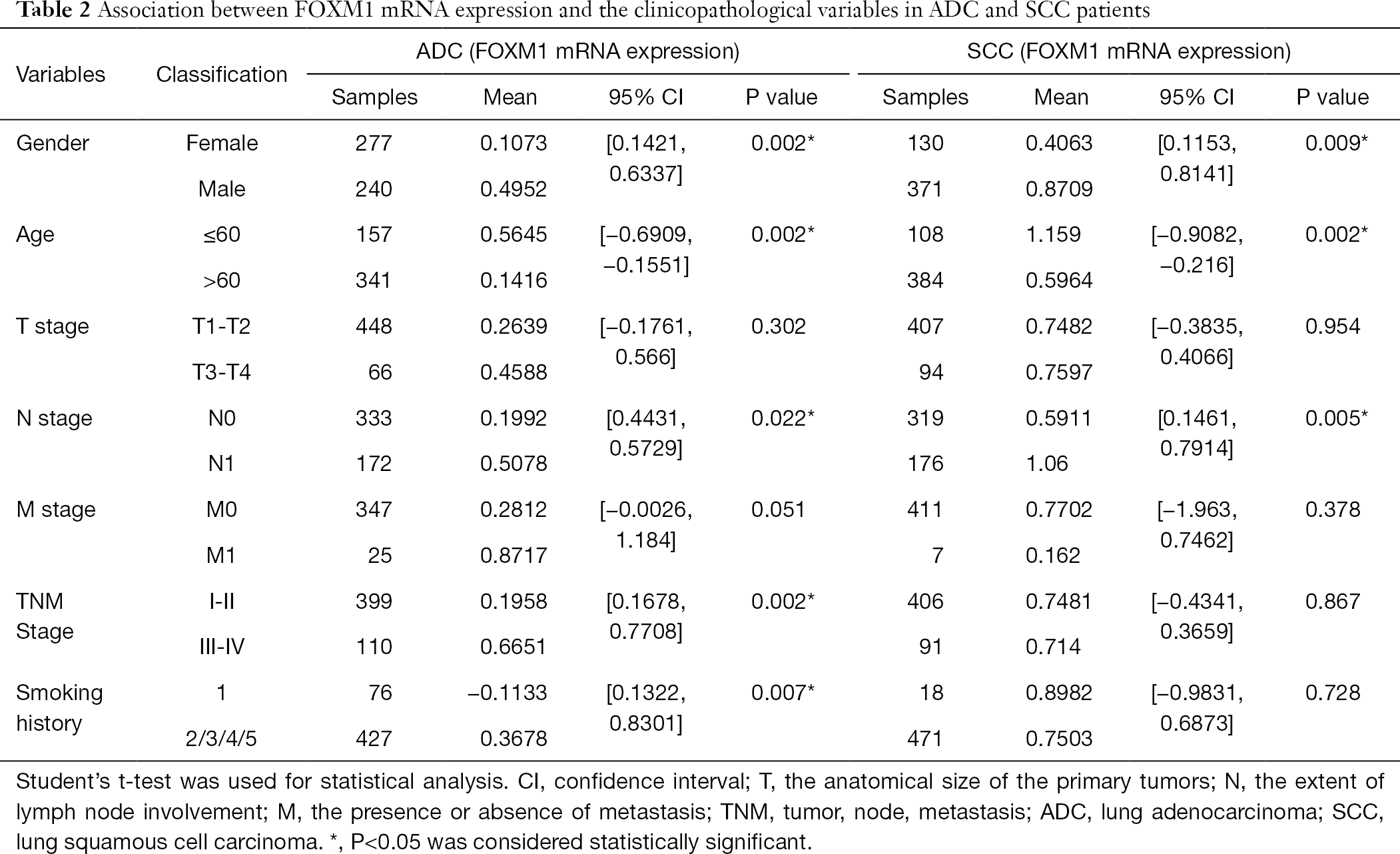 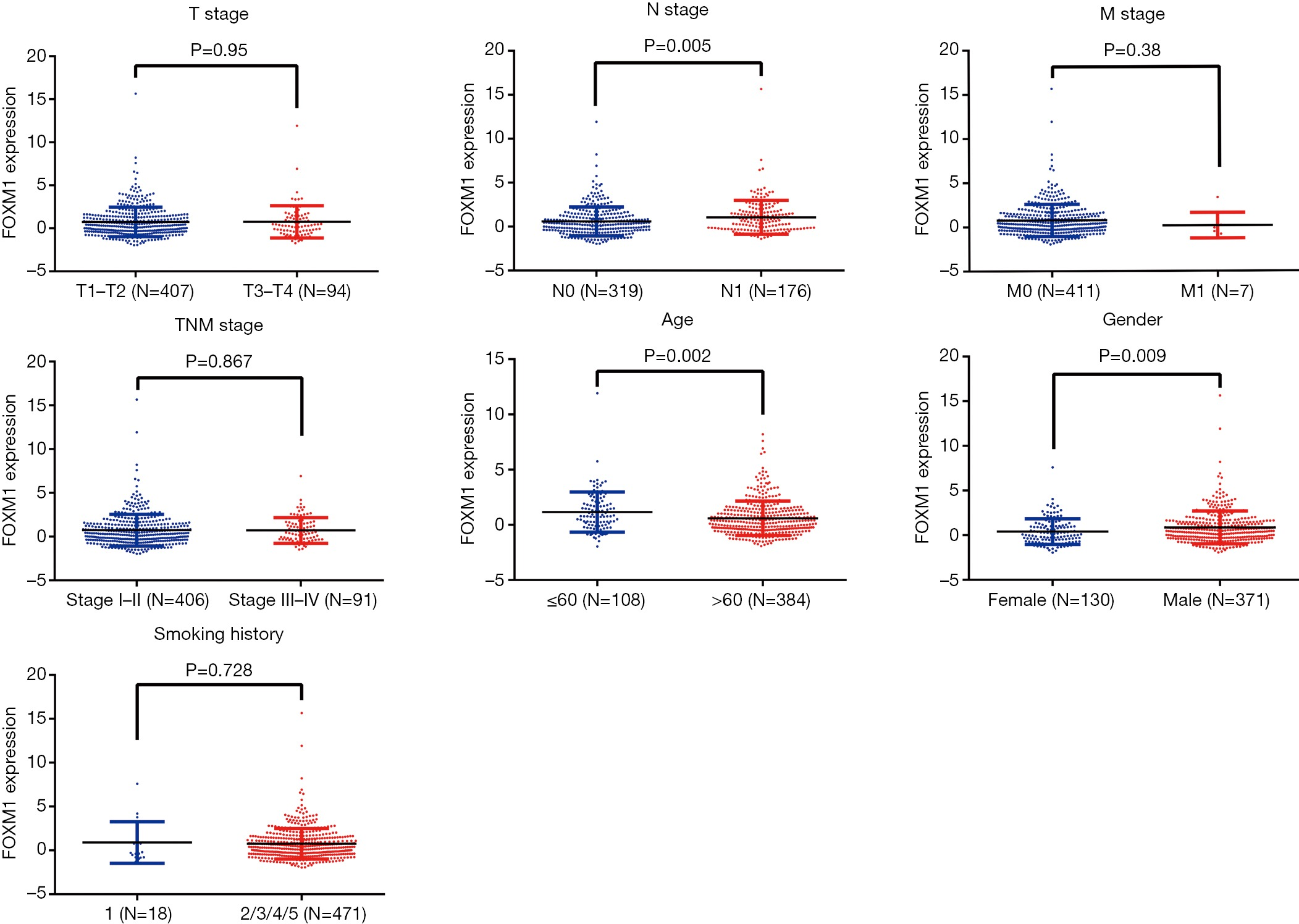 Figure 4 Correlation between FOXM1 mRNA expression and clinicopathological parameters in SCC. FOXM1 mRNA expression was related to N stage, age at diagnosis and gender, but not with T, M or TNM stage, or smoking history in SCC patients. T, the anatomical size of the primary tumors; N, the extent of lymph node involvement; M, the presence or absence of metastasis; SCC, lung squamous cell carcinoma.

Because FOXM1 mRNA expression was significantly different between ADC and SCC patients, we examined whether this difference would lead to a difference in prognosis for patients of the two subtypes. To this end, we further explored the association between FOXM1 mRNA expression and patient prognosis in ADC and SCC patients. We used the Kaplan-Meier method to analyze the TCGA-ADC and TCGA-SCC survival data for OS and RFS. Results showed that ADC patients with high expression of FOXM1 mRNA had shorter OS (P=0.007, Figure 5A), but there was no statistical difference for RFS (P=0.12, Figure 5B). Surprisingly, we did not find any statistical differences for high or low FOXM1 mRNA in OS or RFS in SCC patients (P=0.433 and 0.551, respectively, Figure 5C,D). 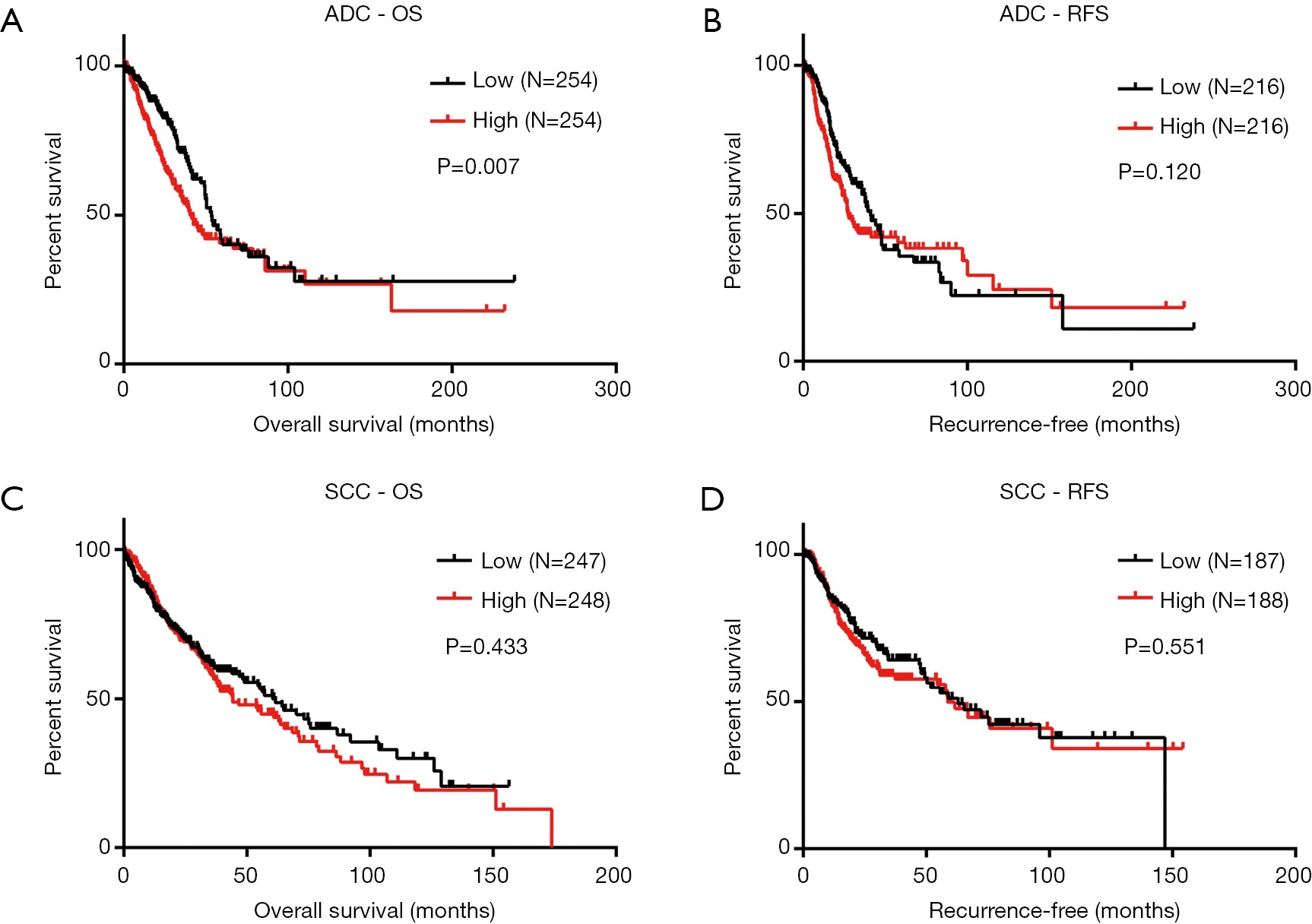 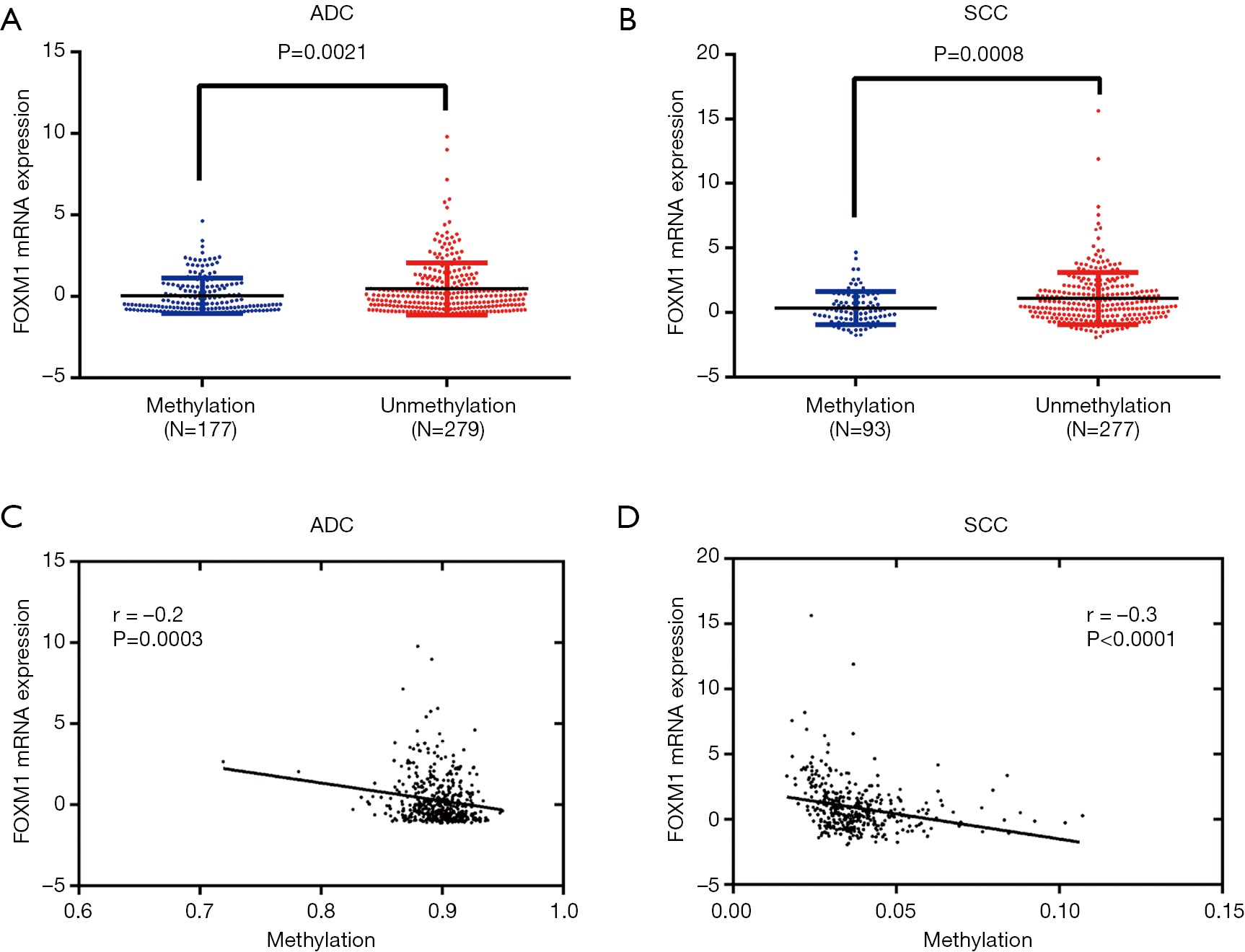 Duo to our results showed that high expression of FOXM1 mRNA is an independent prognostic indicator of OS in ADC patients, but not SCC patients, we predicted functions and pathways enrichment analysis to explore the possible regulatory mechanism of FOXM1 in ADC patients. A network for the top 50 altered neighboring genes with FOXM1 was constructed by the cBioPortal database to explain the mechanism of elevated FOXM1 mRNA expression resulting in worse OS in ADC patients. FOXM1 was closely associated with CCNE1, MYC, CKS1B, SKP2 and CDKN2A (Figure 8). Further GO functions and KEGG pathway enrichment analyses of these genes were performed using the DAVID online analysis tool. GO (Biological process) enrichment analysis showed that regulation of the cell cycle, involving G2/M and G1/S transitions, were associated with the FOXM1 alterations in ADC (Figure 9A). KEGG enrichment analysis found that there were 18 pathways related to the FOXM1 alterations in ADC (Figure 9B). Among these pathways, cell cycle, pathways in cancer, small cell lung cancer, NSCLC, p53 signaling pathway, PI3K-Akt signaling pathway and TGF-beta signaling pathway were related with tumorigenesis and progression of ADC. 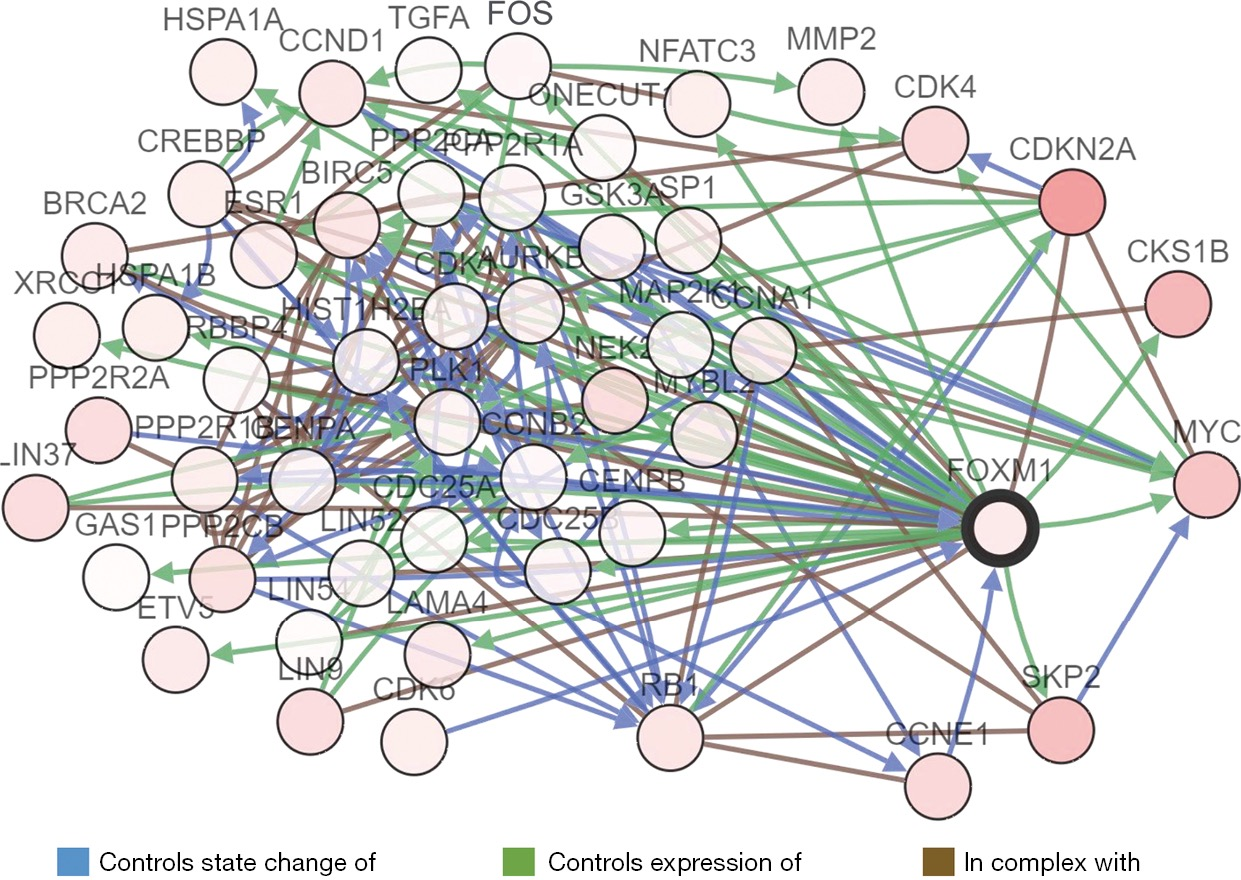 Figure 8 Predicted network for the top 50 altered neighboring genes with FOXM1 in ADC by the cBioPortal database. ADC, lung adenocarcinoma. 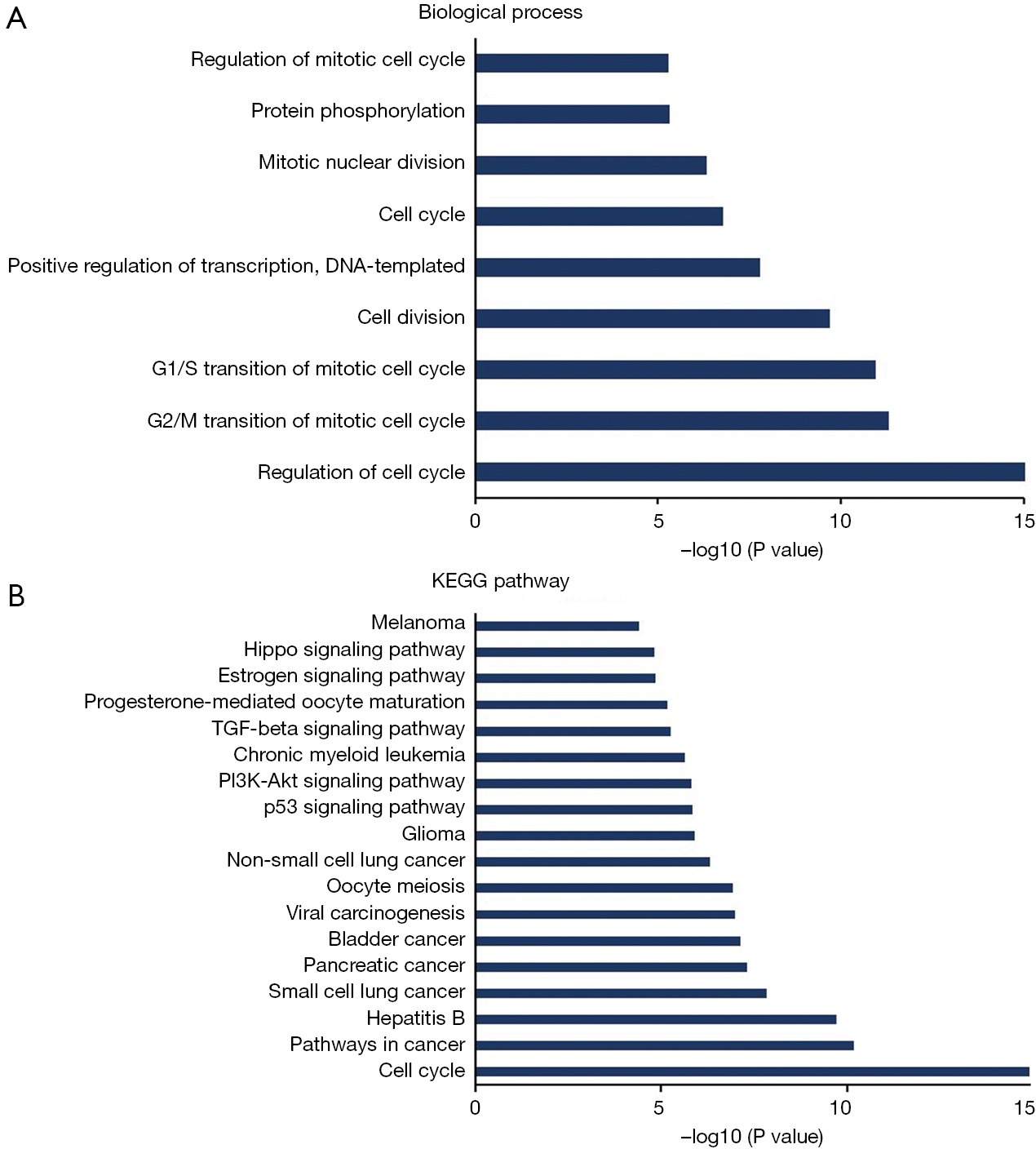 ADC and SCC have different features, such as location, cells of origin, pathology, oncogenic drivers, and molecular markers (20). Studies have reported that the two subtypes also have different prognoses. Han et al. suggested that SOX30 is a favorable and independent prognostic indicator in patients of ADC, but not in patients of SCC (21), and in another study showed that SOX30 binds to CTNNB1 to inhibit the Wnt/CTNNB1 signaling pathway, thereby suppressing tumor metastasis in early ADC, whereas in SCC, it does not bind to CTNNB1 and has no effect in SCC, which might be a reason result for the difference of prognosis in ADC and SCC patients (22). The results are similar to our study, which show that SCC consistently expresses a higher mRNA level of FOXM1 than ADC, but Kaplan-Meier analysis indicated that FOXM1 is a marker for poor OS in ADC patients, but not SCC patients. Therefore, we speculated that FOXM1 might have a similar regulatory network and mechanism to SOX30, which is worth further validating.

To clarify the possible mechanism of FOXM1 mRNA high expression attributed to worse OS in ADC patients, we conducted a predictive network of the frequently altered neighboring genes with FOXM1 in ADC. Results showed that FOXM1 is associated with expression of MYC, SKP2 and CKS1B. Previously, a study indicated that FOXM1 regulates SKP2 expression and influences cell cycle G1-S transition (10). Zeng et al. also showed depletion of FOXM1 leads to the decreased expression of its targets SKP2 and c-MYC in gastric cancer cells (27). Therefore, we hypothesize that elevated FOXM1 mRNA expression in ADC leads to upregulation of MYC and SKP2, thereby promoting tumor cell proliferation. In addition, CCNE1 involved in the state change of FOXM1 One study indicated that Cyclin E binds to CDK2, then leads to phosphorylation of retinoblastoma-1 (Rb-1) or other substrates, which regulates cell cycle G1-S phase transition (28). Furthermore, another study has revealed that Cyclin E overexpression associated with poor prognosis in NSCLC (29). Whether CCNE1 also directly binds to and phosphorylates FOXM1, thus exerting carcinogenic effects to contribute to poor OS of ADC patients deserves further investigation. Furthermore, Hayashi et al. determined that cyclin E expression is lower in ADC than in SCC (30). This finding supports our hypothesis because we also found that FOXM1 has lower expression in ADC than in SCC. In addition, our results showed that FOXM1 and CDKN2A maybe be the same complex and interact with each other. Study indicated that CDKN2A is one of the transcriptional targets of FOXM1, which is also a critical gene for the NF-kB and JNK pathways. FOXM1 can induce its expression and then involve in KrasG12D-mediated lung tumorigenesis (31). Moreover, transgenic overexpression of activated KrasG12D in mouse respiratory epithelium can induce lung ADCs (32). These reports fully demonstrate that high FOXM1 mRNA expression may contribute to poor OS in ADC patients by acting on these key upstream and downstream molecules. GO function enrichment analysis showed that the altered neighboring genes with FOXM1 in ADC are mainly involved in regulating the cell cycle, including G2/M transition and G1/S transition. KEGG enrichment analysis found that FOXM1 could mediate the p53, PI3K-Akt and TGF-beta signaling pathways. These are common biological processes and pathways that have been identified to be closely related to tumorigenesis and progression (33). In our study of FOXM1 mRNA expression, the association between its expression and clinicopathologic parameters, as well as patient prognosis, the network of FOXM1 and its co-expressed genes, and the function and pathway enrichments were based on data mining of the Oncomine and TCGA databases. Further in vivo and in vitro experiments and clinical trials are required to verify our conclusions.

The present study demonstrates that although FOXM1 mRNA expression is higher in SCC than in ADC, it is associated with poor OS in patients with ADC, but not in patients with SCC. Therefore, FOXM1 might be a potential prognostic biomarker in ADC.

The authors thank Kristofer Wood for revising the manuscript.

Funding: This work was supported by Guangdong Provincial Public Welfare Research and Capacity Building Special Fund Project (No.: 2014A020212290).

Conﬂicts of Interest: All authors have completed the ICMJE uniform disclosure form (available at http://dx.doi.org/10.21037/tcr-20-1103). The authors have no conflicts of interest to declare.